So today…pretty busy day at Walt Disney World for the Goodys and Nerdys. Let’s start at the beginning…

The day started again for me with a 5:45 AM run. Then I came back and we got ready and met up with the Nerdlers to head over to Animal Kingdom for our 8AM breakfast at Tusker House. Love this place. The bobotie. The ham with the spicy honey mustard. The biscuits with gravy. The Mickey waffles. All good stuff…

And of course we met some characters. We got to see Donald, Daisy, Mickey and Goofy. All dressed up in the safari attire. They were awesome. And we got some great pics but I only have one on my phone and it’s too late right now to go searching for the others. Plus I got to Periscope a little Goofy for Steph (Goofy proposed to her a couple years ago so.)

After breakfast, Matt, Owen and I ran over to Expedition Everest and rode it. Up front. Good times, disco Yeti…

And after the ride, we ran into Robyn (almost literally) right outside the attraction and walked over to Kilimanjaro Safari with their whole crew (Robyn, Terry, Jimmy, Maryanne, Dotty and Susan) since we both had a fastpass around the same time. This made 14 of us in the jeep…

And the safari was awesome today. We saw LOTS of animals out. The giraffes were super close and the lion and elephants gave us some great shots as well. I loooooove animals. 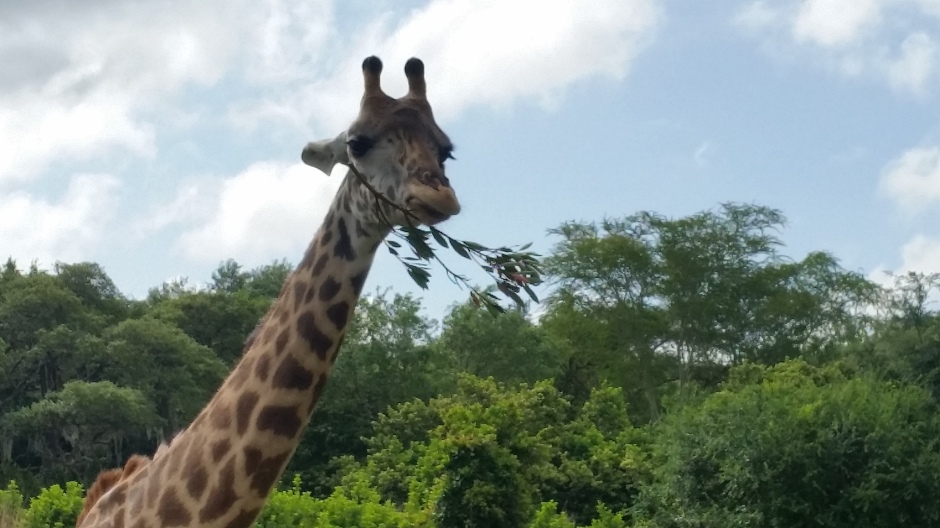 After the safari, we walked the Pagani trail and then rode Dinosaur and Kali River Rapids before lunch at Yak and Yeti.

To start, we got some Yak Attacks. Obviously.

We split a bunch of apps – pot stickers, fried green beans, firecracker shrimp and a dim sum basket – and for an entrée, I got the chicken tikka masala. Spice-town. Nickie got the lo mein and the boys got the steak and macaroni and cheese. All super good stuff. I really love this place. Especially the Yak Attack. This should be obvs.

During lunch, since we had used up all our fastpasses, we made another one for after lunch at Tough to be a Bug using our phone. Once lunch ended, it was time to go inside the tree of life. Fun fact – Nickie JUST realized there are animals carved into the tree. Heh, sorry hun.

Here are some more pics from the day at AK…

After that, we headed out and went back to the resort for some quick pool and hot tub time. It felt pretty hot today so this was def welcome. But then we went up, got ready and walked over to the Grand Floridian for dinner at Narcosse’s.

Nickie snapped some good pics on the way over…

Now, like I said, this place and California Grill had both each given us one good night and one not-so-good night so our experiences on this trip were sort of tie breakers. And as we saw last night, Cali Grill was bomb.com so. This place though? Eh, I don’t know. The food was good. We all got cheese plates tonight and Matt and I both got the lobster while Nickie and Laura got salads on account of still being full. From breakfast. From two days ago. Owen got the mac and cheese and Myles got steak. I can’t remember what Will and Jack got but Will was literally cracking me up with his jokes tonight. They were THE highlight for me on this meal. Here’s one…

Q: Why did the guy fall off the minivan?
A: Because someone threw an elephant at him.

I also loved this one – Did you hear about the 4 blondes that took a road trip to Disney, saw the sign that said Disney World, next left turn? They ended up taking the turn and spending a really fun week in the most magical place on Earth.

And as always the almond cheesecake and make-your-own-s’mores for the kids were a hit.

But the service here is just always lacking. I always feel unwelcome there. I always leave there feeling like the waitstaff feels like they are being forced to work at a Disney restaurant. They just seem so put off by…well….everything. I was just not into it. Not sure I will be going back.

But the night was definitely not a loss. On account of surprises. Nickie and Laura had booked a boat for Wishes! AHHHHHHHHHHHHHHHHH 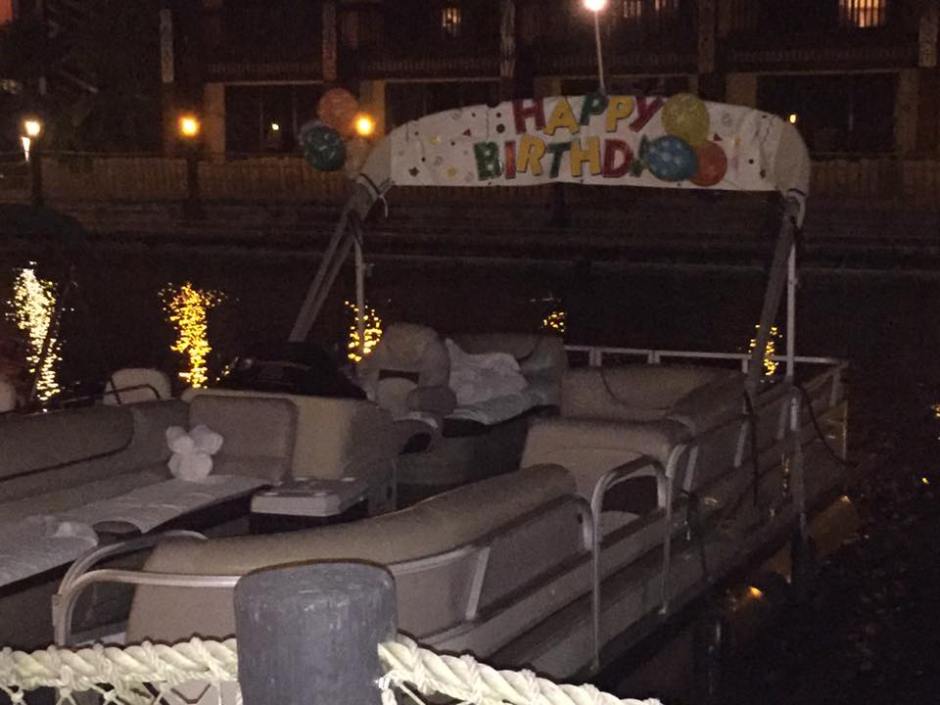 This was AMAZING. We had the whole boat to ourselves. The guy provided snacks and non-alcoholic drinks and we brought some beers and wine on board. And before the fireworks, he took us around the Seven Seas lagoon and gave us some Disney knowledge. Not that I didn’t already know most of it but still…it was a great experience.

And then we settled in right in front of the Magic Kingdom and watched the fireworks. Just the eight of us. It was so nice being on the water. The Wishes music was piped in and we just sat and let the boat rock us as we watched from the lagoon. Thanks so much Nickie and Laura for putting this together. It kicked a lot of buttz.

So yeah, a pretty amazing day, no? Tomorrow it looks like we are changing our morning plans slightly from what we had originally been planning to do so stay tuned. And of course tomorrow….MORE PEOPLE! Like, lots. UGH SO EXCITED.