Now, I should get something out of the way. The movie we watched for this night is one that, at first glance, would be one I have maligned in past posts. As far as Pixar movies go, this one may be further down the list but it’s definitely not my least favorite and a bottom 5 Pixar movie is still a pretty gosh darn movie.

Plus, we like HAD to watch this movie. It’s all kinds of Route 66 happening. It’s Cars btw. And we decided to watch it not only because of all its Route 66-ness, but also because a lot of the scenery in the movie was inspired by the location we are focusing on for this post. This movie has SO MUCH to do with our trip, I feel like I have to – get excited – ADD A NEW SECTION to the post!!!111

But let’s not get ahead of ourselves. First…

Day 9, we wake up in Albuquerque, free of the poisons of tobacco and hit the road on our way to an actual destination. By that I mean, a place that like people travel to and see. As you may recall, the couple days leading up to Day 9 will be filled with a ton of stuff but it will mainly be roadside attractions. House of Mud. Biggest Ball of Twine. That sort of thing. But today, welcome back to EPIC.

Before we hit the road, we are having breakfast at the 66 Diner  in Albuquerque. Says they have authentic 50’s food there so I am hoping that means lots of deadly food dyes and the like. Hey, remember the 50’s?

Now, this drive is about 6 hours and, weirdly, there is nothing on our spreadsheet outlining any roadside stops. I do know that the New Mexico Mining Museum (which doesn’t have an official website, so you know it’s good) is on the way so we may check that out. And we also may stop and stand on a corner in Winslow, Arizona. Which would be such a fine sight to see.

But this may also be a drive we power through for the most part because we need to get to the Grand Canyon. Wait, I am sorry.

That’s better. We are staying on the South Rim at the Kachina Lodge. This place? It’s probably our most expensive hotel and yet we are still not 100% if there will be air conditioning. So, you pay for the big hole I guess.

I think we are grabbing pizza at the Canyon for dinner that night and the plan is to take a ton of fun pics and especially get a new pic like the one below from our honeymoon.

And then we will catch sunset over the Canyon and probably grab a couple of drinks at the El Tovar, which is where Nickie worked for a summer back in the 90’s. Hey, remember the 90’s?

For this theme night, we did AN ACTUAL ACTIVITY. I am literally using all the capital letters in this post on account of being excited.

Oh right, the activity. We did a puzzle.

Well, the puzzle was a Route 66 puzzle, OBAMA. And check out these pics.

As of right now, the puzzle is still not finished. Don’t look at me like that. I have a life.

For the entree, we had Mater’s Meatball sandwiches, Flo’s Fries and Dinoco chicken nuggets.

And for dessert, we had Luigi’s leaning tower of chocolate doughnuts. Yeah, that happened.

Why is Cars SO important to this trip?

Oh you mean besides the plot being borne of a road trip to California?

This could be a whole blog post. Most of the characters in the movie are based on actual people associated with the Mother Road. I mentioned Sally back in my Oklahoma post (LINK) regarding the Rock Café but also Mater, Sheriff, Fillmore, Flo – they are all based on real Route 66-ians. Route 66-ites? Uh.

And the locations. Places like the Wagon Wheel (where we are staying in St. Louis), the Cadillac Ranch (which inspired the mountain range in the background of the movie) and Seligman, AZ (which will be noted in the next post) all directly inspired elements in the movie. And I mean, hello…ROUTE 66.

When we watched it this time around, we watched the accompanying special features that were part of the DVD and in the “making of” documentary piece, John Lasseter talked about a road trip he took with his family across Route 66 as inspiring him to make this movie.

Oh, also – we are going to be seeing Cars 3 on this road trip at a drive-in. And being that we are visiting Disneyland. I mean, Cars Land. So, I mean. Cars Cars Cars.

Look, I really do like this movie. In fact, as I was watching it I realized I liked it so much more than I remembered. I mean, this movie was the first movie both of my kids saw in the movie theater. It was first-run when Myles was old enough to go to the movies and it was re-released just in time for Owen to go to the movies.  I think the crappiness of Cars 2 has fogged up the rearview mirror. With its crappiness. A fog of crap.

And at the heart of this movie is the reason why we are taking this trip in the first place. The whole movie is about slowing down long enough to appreciate the world you typically rush by. Lightning is a race car, man. All about speed. And he’s famous and all that. These sexy little cars are all like “oh Lightning, you’re the coolest.” Wait, did I say sexy little cars? You would think I would have deleted that out of embarrassment.

But of course, he ain’t happy. I mean, he doesn’t even have any friends. And he really only finds true happiness in Radiator Springs – where he is pretty much forced to stop and smell the cacti. He has spent so much time focusing on the destination (the Piston Cup) that he has missed so much of the world around him. And that’s a pretty awesome message. I think when we tell some people about this trip, they think we cray cray. But a big part of why we are doing it is to take a real break from our busy lives, get on the road and get back to something that kind of feels lost. Time. And hopefully at the end of this 17 days, we will all come away a little bit closer. A little bit smarter. And a little bit happier. 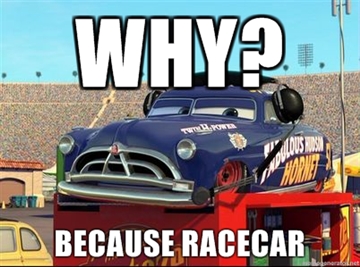