To the end of the road

We had already started packing things up over the past two days but on Day 7, we woke up and finished and as we were packing up the bathroom, we found this little guy. 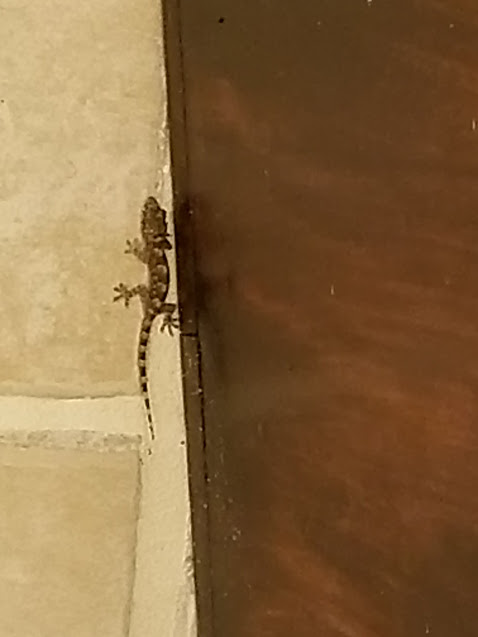 As you can see in the picture below, the kids were super helpful with the whole packing thing.

For breakfast, we decided to visit our favorite restaurant for our last meal – Schooner’s. Plus, Larissa really wanted to try the Eggs Benedict as she missed breakfast here the first time around. While we all knew it was our last day, we were still in good spirits. On account of food was coming. Mia, as per usual, was enjoying life.

The boys were. Um. Here is a pic of the boys.

So here is something super crazy. I took ZERO pictures of our meal. I got the eggs benedict again and it was once again delicious, though the eggs were a little less runny than I prefer.  Here is a pic of the eggs benny from the other day to remind you of what it is. Like, in case you don’t know what eggs benedict is. Now, I am just writing words to fill space. Look, eggs benedict.

Being that I didn’t take any pictures, I don’t remember what everyone got. I do, however, remember Larissa grabbed Mia some peach yogurt. Of which she was skeptical. However, Nickie told Mia the yogurt was magical and that totally worked and she ate the whole thing. Ha, Mia is so gullible.

And Tony, once again, surprised me with his breakfast order. He ordered the grits. And once again, he wondered out loud why he ordered what he did. Breakfasts are tough for Tony. But it all worked out. The grits came with a poached egg on top and he said it ended up being one of his favorite breakfasts.

It was a really yummy last breakfast and I can definitely say Schooner’s was our most consistently good restaurant in all of Beaches. I recommend multiple visits for both breakfast and dinner. And multiple entrees at every meal. PRO TIP!

While they were checking out the pics, Tony and I took the kids to the Cascades Pool for one last dip. While there, I was legit pacing the pool worried about what to do with our floats. I was texting Nickie, sweating, trying to figure it all out. Full on panic mode. A float-astrophe.

While at the pool, one family was asking where we got our Unicorn Float and I was just like, “you want this one?” and we left It with them and their daughters, who were super psyched. Nickie later gave the Flamingo float to this family from Peru who were asking about it earlier in the week. So we made two families very happy.

The kids, however, did not want to leave their pizza floats. So I decided to take Owen to the dive shop to deflate the pizza floats. Myles made his way back to Pirate Island for a last ice cream. And then, chaos ensued.

By this time, it was probably like close to 10:45 AM or so. Our shuttle was leaving at 12PM and the plan was to get to the departure lounge for a quick shower and change before heading to the airport. Now, as a refresher, I was heading to the Dive Shop with Owen. Myles was heading to Pirate Island. Nickie was at the pool with the Falzones.

I figured it would be quick, so I leave my phone and shirt with Nickie.

I get to the dive shop, thinking they maybe have some magic float deflator machine. I ask the guy how we should deflate these and he said, “you just undo the nozzle and squeeze.” Heh. He did help though and took one float while I did the other. This obviously took longer than I was planning.

Around when the floats were finally deflated, Myles comes over and tells us that Nickie told him to tell us to meet them at the Departure Lounge. So the three of us make our way to the Lounge and just as we are walking up, Myles says “hm what if they’re not there?” Which was an obvs squad red flag. And shocker – they weren’t there.

Meanwhile, Owen feels a little put out by the fact that Myles got to get an ice cream and he didn’t. So, I tell Myles to take Owen to Pirate Island and meet us back at the Departure Lounge when they’re done.

And I start walking back to the Cascades Pool.

I run into Tony on the way to the pool and he tells me Nickie is at the pool waiting for us, but that they were heading to the lobby. So I start walking a little faster to try and, I don’t know, beat the anger? And when I get to the pool? No Nickie. Like nowhere.

So I walk back to the lobby and run into Larissa and Mia, who are hanging with Abby Cadabby while Tony was checking them out. She says Nickie just texted all of us saying she has no idea where her husband and children are. I ask Larissa to let her know I am with them and that the kids are meeting us at the Departure Lounge.

Nickie walks into the lobby and we book it over to the Departure Lounge to find the kids waiting there, ice cream in hand.

I grab the kids, we run into the bathroom. They get changed and I jump in the shower to just rinse off quickly while Nickie settles up with the woman at the Departure Lounge (on account of we didn’t have time to really check out and settle up in the lobby.)

Our 12:00 PM shuttle is boarding. I walk out to make sure all our luggage is there and I see the shuttle is boarded and doors are closing. I walk back into the room and the staff assures us they will just call for another shuttle. So we get our own shuttle to head to the airport.

I know, that ending was super anti-climactic. But consider this. I didn’t even get to have one cookie in the Departure Lounge.

But we made it. After a 20-minute shuttle ride, we made it to the airport. And once again? Empty. We really lucked out here. We were through the line and on the other side within ten minutes.

We heard such horror stories about this airport and both ways, it was a breeze. Again, the resort was at 50% capacity so this was obviously a slow time. But we walked in and we made our way upstairs to the bar/lounge area. And it was SO COOL up here. They had outdoor seating with a bar and small café/restaurant thing.

We also ended up getting a few beers. Again, we had a little time. I actually even ducked into the gift shop to get the kids some activity pads and M&Ms. Which came to 35 dollars. I only mention this because 35 DOLLARS for three activity pads and three bags of M&M’s. Yeah. What is the DEAL with airports?

But at least the kids never used the activity pads. 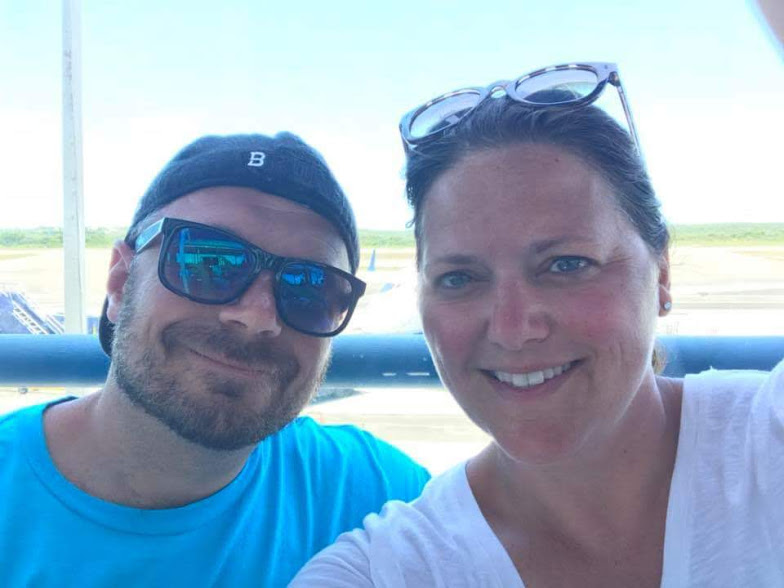 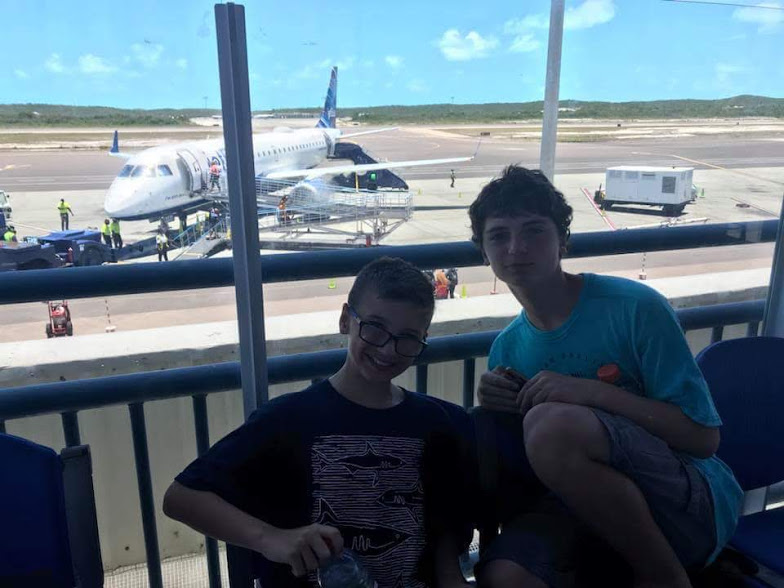 And finally, it was time to board. We once again had a connection. So the first leg of the flight was going into Miami. There were TVs on the seat backs and a good selection of movies.

Unfortunately, with the flight being so short into Miami, I didn’t really wanna start a new movie (even though I was very close to watching The Florida Project) so I opted to watch a movie I have seen once or twice. 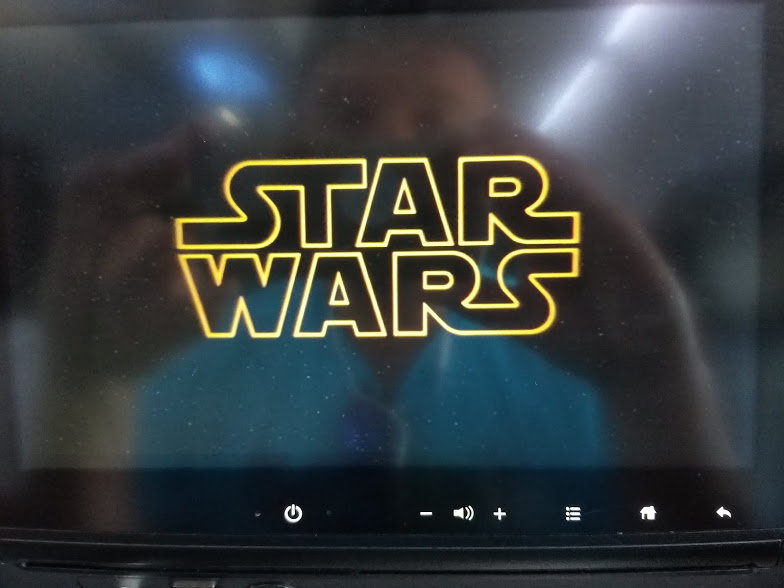 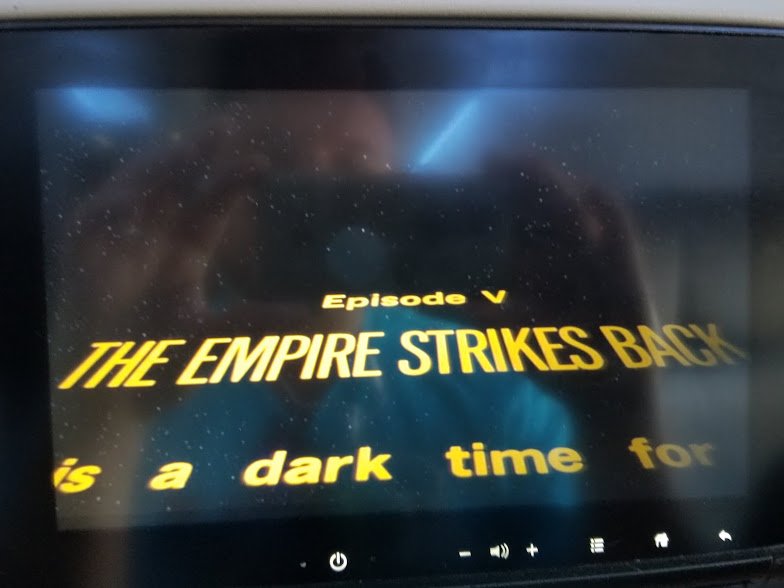 Did I say “once or twice?” I meant “literally hundreds of times.”

OK so word of advice. If you can avoid flying into Miami on an International connection, AVOID THIS AT ALL COSTS. What a crazy scene. We fly in and are directed through customs and all that. When we go through the machines, Owen receives one of those red X’s so we have to go to the special Red X line. As we are waiting there, we hear over the loudspeaker,” Can the parents of Mia Falzone please report to the Information Desk?” We found out a little later they left her passport at the machine. Ha silly Falzones

We get through the line and then have to go to baggage claim to pick up our bags. As we are picking up our bags, we hear, “Can the parents of Owen Goodreau please come to the Information Desk?” Yeah we were definitely Griswolding it up here. Nickie and Owen walk back while Myles and I pick up the luggage. Turns out the guy at customs never gave us Owen’s passport back.  Ha, silly Goodreaus.

We meet up with Nickie and then are directed to this area…like 50 feet away….where we drop our bags off. This system made no sense to me.

We were then directed essentially out of the gate area and back into the main ticketing area and then down to a security line allllll the way on the other side of the airport. And then we had to go back through security. We were given TSA pre-check but since that was full, we were going through the normal security line.

Seriously. Who thought this was a good system? I understood none of this. Miami Airport – you fail at life.

But we do finally get through and manage to grab some pizza and wine at the Sam Adams/Pizza Hut combo thing on account of there was nowhere else to get anything to eat or drink. I mean it. Never come here.

But we do get on the airplane finally and we were on our way home. The flight was pretty uneventful. We arrived back in Boston at around 11:00 PM and we said our goodbyes to the Falzones (sad face), grabbed an Uber and headed home.

And I mean, that was our trip. Writing about this trip and looking back over it has served only to emphasize even more the amazingness of this trip. We ate so many good things. Had so many awesome adventures. Made too many incredible memories with some of our favorite people.

I am a pretty lucky guy.

Thanks for reading and now, onto the next adventure.