Give me those Star Wars.

Nothing but Star Wars.

Nothing but Star Wars.

If they should bar wars.

Yup. Another Star Wars post. Well, specifically, another Galaxy’s Edge post. In my last Galxy’s Edge post here, I talked about the basic details, opening dates, backstory, and major attractions in Galaxy’s Edge. So check that out for sure.

In this post, I am gonna get into everything else – food, merchandise, costumes, cast members, etc. to round out what we know about Galaxy’s Edge so far. Let’s blast off into hyperspace, space rangers!

The food – AKA Will there be blue milk?

Of course there will. And of course we’re going to talk about the dining locations. Because food.

Oga’s Cantina is the location receiving the most press. Probably because it’s the closest we will ever get to grabbing a drink at Mos Eisley anytime soon. Which, I don’t know. Do you really wanna grab a drink at Mos Eisley? Place looks rough. I get nervous taking the trash out after dark. So not 100% I would do all that well in that wretched hive of scum and villainy.

So maybe Oga’s Cantina has more of what I am looking for – the appearance of danger without any real risk. Perfect.

Run by proprietor Oga Garra, and much like Mos Eisley, Oga’s Cantina is set up as a shady watering hole where creatures and beings from all over the galaxy can meet, do shady things, and have a cocktail.

One notable Oga’s employee actually may be familiar to those that have ridden the old Star Tours attraction before, you know…the adventure continued. The ex-Star Tours pilot, RX-24 (also knows as “Rex”) will be the in-house DJ.

And the rumor is Paul Reubens (Pee-Wee Herman) will be returning to voice the robot. I am still considering this rumor but I mean, if Disney listened to reason, this would def be the case.

But enough about robots and villains and Pee-Wee Herman. You wanna know what they’re serving, right? Of course you do.

Oga’s will be focused primarily on cocktails and mocktails. Which are like cocktails. Only less fun.

On the subject of cocktails, Oga’s will be the first-ever place to find alcohol in Disneyland Park. Well, besides my travel mug.

However, it should be noted that no drinks will be allowed outside of Oga’s Cantina in the park.

The alcoholic beverages offered are as follows: 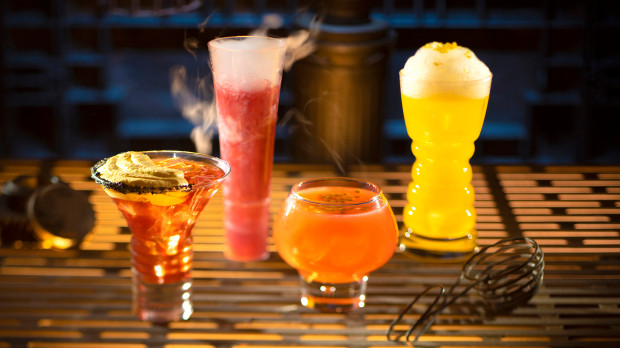 The non- alcoholic beverages offered are as follows:

Like I said, Oga’s will primarily be focused on beverages, but there will be some light fare available. I love the term “light fare.” It’s way more sophisticated than saying “alcohol-soakers.”

Docking Bay 7 will most likely be your primary focus when looking for a meal in Galaxy’s Edge.

This location is the main dining area in Galaxy’s Edge, run by Chef Strono “Cookie” Tuggs, a former cook for Maz Kanata. The dishes offered here are mentioned below, each with both ingredients and what they represent in the Star Wars universe so you can feel like you are being adventurous when you are really just eating chicken. 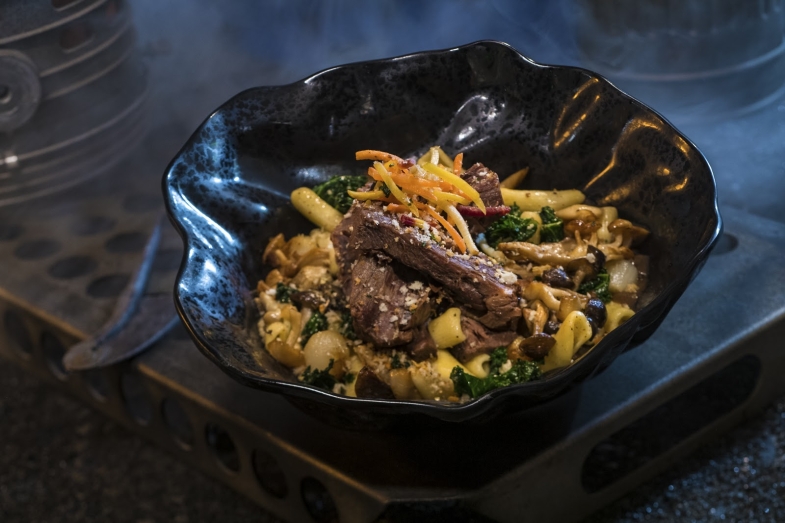 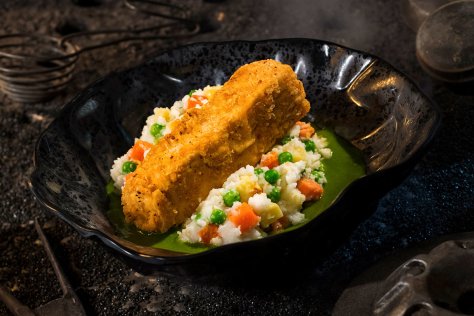 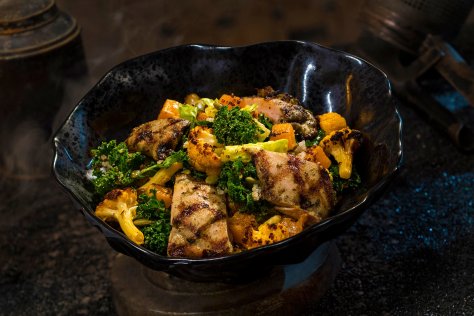 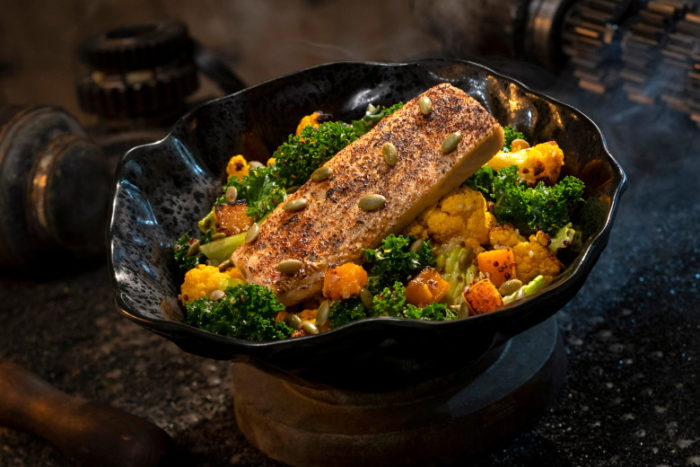 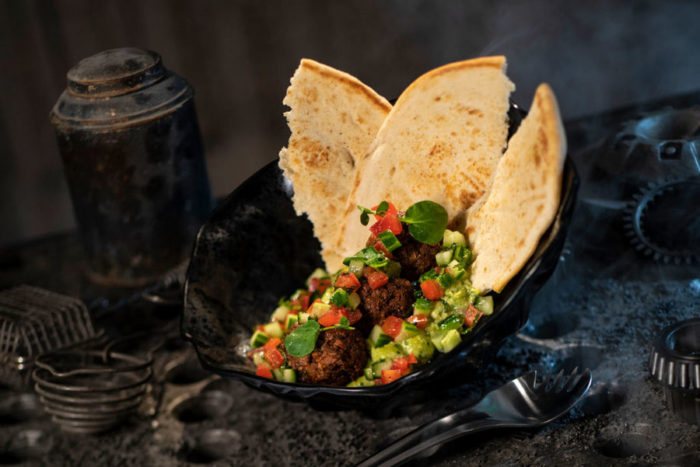 This location will also offer a couple kids meals for younglings turned off by the idea of eating fried large, flightless birds or ewoks (eh, one last shot…):

And there will be a couple non-alcoholic specialty drinks offered here as well – Phattro and Moof Juice. And I don’t know what they are, but here is what they look like. See? Colors. I do know that in the films, phattro is alcoholic. So already, I am less than enthused with the remake.

And for dessert, you can opt for the raspberry crème puff or chocolate cake. 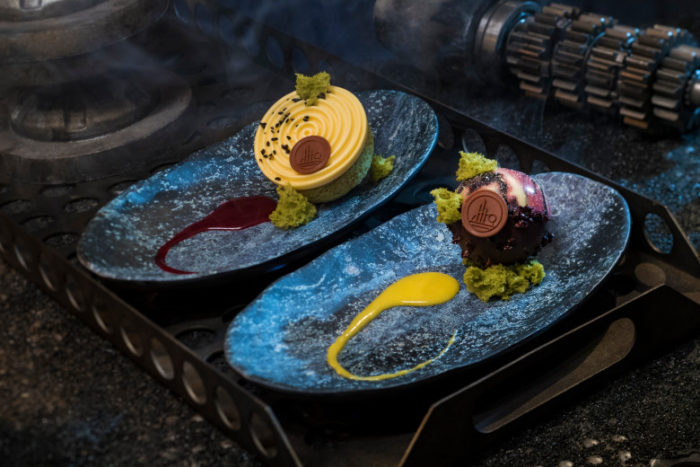 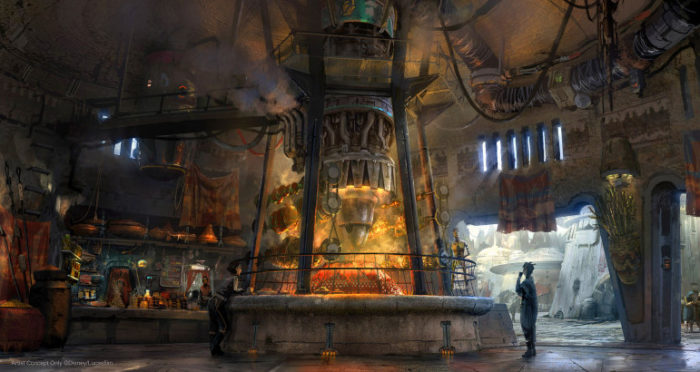 Ronto Roasters is an open-air “meat on a spit” type place run by Bakkar and his droid 8D-J8. Being a huge podracing fan, this place is decked out with podracing paraphernalia and Bakkar has even fashioned an old podracing engine into a meat roaster. The meat being roasted? Ronto, of course. Ronto are a huge herbivore species native to Tatooine. You can see them throughout the films, most notably as an add in the new edition of New Hope.

This is a place to grab something quick to eat, so offerings are minimal but nonetheless look pretty good: 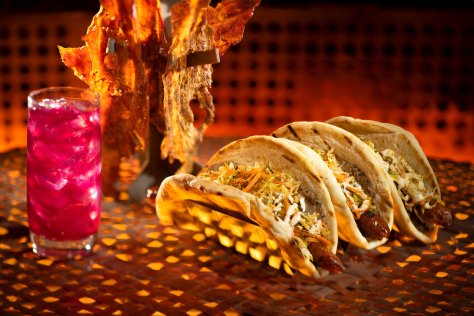 And a few specialty non-alcoholic beverages will be offered as well:

Kat Sakas will be fashioned as a grain stall in the marketplace at the outpost, where the proprietor sells Outpost Mix (sweet and salty popcorn with a bit of spice.)

This is where people will be going to get their blue (or green) milk fix. Unlike the blue milk used in the Blue Bantha at Oga’s Cantina, these beverages are frozen and frothy, direct from Bubo Wamba Farms.

According to early descriptions, these will be like milkshakes in texture and rather than being based on actual dairy milk, these will be plant-based milks. So even if you have no patience for lactose, you can enjoy them.

And yes, the green milk is…ewww….this…

But, for what it’s worth, I hear it has a nice tropical flavor. Ew.

Great. But how ELSE can I spend my money (AKA what about the merchandise?)

I mean, OF COURSE there are gift shops. It’s Disney. But in keeping with the whole theme of Star Wars immersion, these are like hella-gift shops: 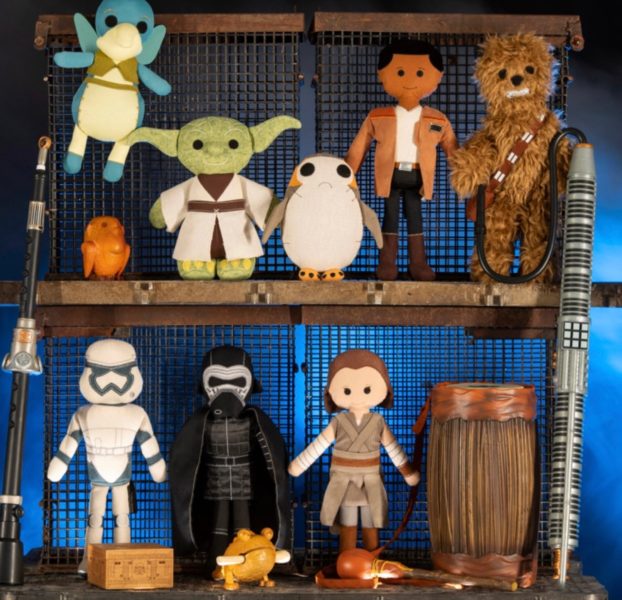 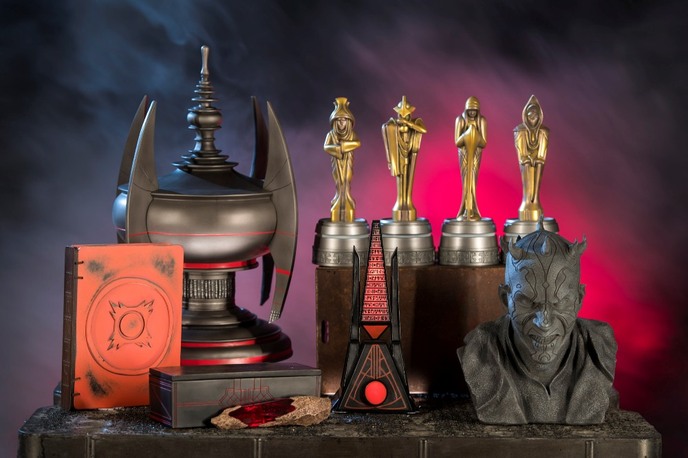 And there will of course be places to buy apparel, like Black Spire Outpost Fashion, where you can buy First Order and Resistance outfits, pins, water bottles, etc.

Anything else I need to know?

Yeah, of course. One of the big components of what has everyone excited about Galaxy’s Edge is the level of immersion that’s expected. You will legit be surrounded by Star Wars, from technology you can access via your smartphone (check out this article on the Disney Food blog for more information) to a brand new John Williams composed (!!!) score for the land…

..it’s gonna be bananas. You are really going to feel like you’ve landed on a whole new planet.

You will interact with cast members in a brand new way, too. Each cast member in the land will be fully outfitted in some pretty sweet costumes.

And they will be schooled in being able to converse completely in-character. From roaming cast members to the ones manning the registers at shops and dining locations, reports say they will be trained not only in their job duties, but also in improv so they can carry on a conversation with anyone willing to ask a question. Plus, they will know who you are and how you have been interacting with the land. For example, they will know how you fared on Smuggler’s Run, as alluded to in my first post.