I know it feels like we JUST did this, but it’s time for yet another FUN NIGHT. Fun Night? Eh, that one was less inspiring.

But yeah, we have about 9 weeks left until our trip and (after this one) 12 more movies to get through until we hit 40. Impossible? NEVER!

Well I don’t know…maybe it’s impossible. But we are gonna give it the old college try. Which is an expression I just don’t get. On account of I hardly tried in college.

But you guys. Eh, plural? I don’t know…you guy? Are in for a treat. Because this is another Disney night we combined with a holiday. Yerp…a special Valentine’s edition of “Watch my family have more fun than yours.”

For this special day in which we may or may not be celebrating a beheading, we decided to watch one of my favorite princess movies – Beauty and the Beast.

Yeah I have a favorite princess movie. No…YOU’RE lame.

Being that this was Valentine’s Day, we had sort of a combo food/activity for this one. The four of us went out for a nice V-Day dinner at one of our favorite little bistros – Stearns and Hill in Melrose. There was no gray stuff, but still…a nice dinner.

Owen had a croque monsier. OK, fine…he just had a regular grilled cheese. But it did come with French fries. So ya know…French.

And Myles had some cheeseburger sliders. Sorry…hamburger au fromage…um…sliders. And also French fries.

They also both excused themselves to go oui oui while we were there….French.

And then we walked over to the bakery across the street to get some eclairs.

But M&O were much more into the Oreo cupcake. So that happened for them…Nickie and I stuck with the theme.

The message at the core of Beauty and the Beast is one we have all heard time and time again. Beauty is only skin deep. Or perhaps it’s in the eye of the beholder. Or don’t worry. You’ll grow into your looks and then they’ll all be sorry and wish they could travel back in time to right the wrongs they so often bestowed upon you. Have fun at camp. Love, mom.

Hrm, maybe I was the only one that heard that last one.

But the point is – the movie (and it’s source material) is based on something we have all heard before. But this doesn’t make the movie any less effective. In fact, it’s quite an extraordinary film. The supporting cast is great – Lumiere, Cogsworth, Mrs. Potts. Though what’s the deal with Mrs. Potts? We know she has other children yet she really only pays attention to Chip. Hrm, maybe it’s because she is so old she forgets about the others? I mean, seriously…did she have Chip when she was 75?

Where was I? Oh right. And Gaston is a great villain. All at once funny and deplorable like a good Disney villain should be. And Belle and Beast are great main characters as well. Belle is probably my favorite Disney princess because she is so much more than just a pretty face. And she uses words like “provincial.” And Beast really does personify the entire message of this movie. He remains a beast for pretty much 99% of the movie and his looks remain the same, yet we grow just as fond of him as Belle does.

OK, not just as fond…but I like him. Just not like that. Besides, even though she loves him she still calls him “Beast” even at the end as he faces death. I mean…he has a name.

As I mentioned above, the message of this movie is one we have all heard countless times. And yet, that doesn’t make the message any less true, right? Because regardless of how many times we have all heard it, we still live in a world where beauty is valued above most else. And no matter how often we all say we look beyond beauty, this is largely and unfortunately untrue. I am much more concerned with shedding a few pounds than, say, adding a few IQ points. And I mean, this isn’t something I want to be thinking. And it certainly isn’t the type of example I would like to set for my children. It’s just so easy to judge others and ourselves on beauty, isn’t it? It takes a lot more work to look deeper sometimes. But we need to…if we only judge on beauty, we are living a life on the surface. There is so much to this world that lives below the easily seen. So even though we all have heard it, it’s good to be reminded once in a while because it’s a lesson very easily forgotten. 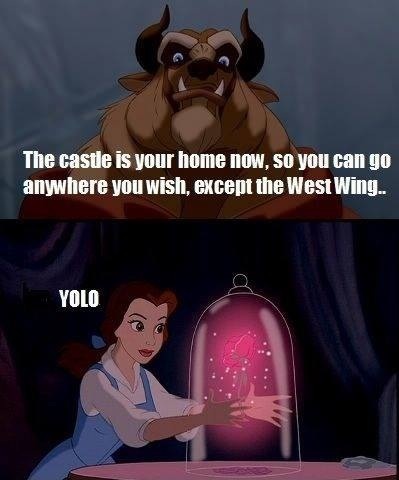