So today was another long driving day but we did still manage to squeeze in a ton o fun. You know. Like we do.

A bit of a disclaimer though. While yesterday was a day where we didn’t care about time, today we really wanted to leave some room to explore our destination so we had to sacrifice some spots we were planning on seeing. No Blue Hole and no Glenrio is what I mean.

Also another disclaimer. I am super duper tired right now. It’s been a lot of driving today and we hit another time change so I may start to ramble and not make much sense as I write and say things that I say when I write things that are what I want to say to you.

We woke up pretty early today because we wanted to make sure we could still do a good amount of roadside stuff and get into Albequerque at a reasonable time.

So we packed things up and walked down to our FREE BREAKFAST at the hotel. I had a veggie omelette snd turkey sausage but eh I didn’t take any pics because it’s just not that exciting and it was also early so. But they did have one of those cool pancake machines

We then hit the road and drove for about an hour to get out of Oklahoma.

And we drove for a little bit more until we hit the town of Shamrock, TX. Pretty cool little town but this was the main reason we stopped in…

The U-Drop Inn. Once a functioning gas station, this place now stands as a piece of cool architecture and there is a gift shop there as well (but it wasnt open yet on account of us being so up  and at them.)

More imortantly to us though, this place served as the inspiration for Ramone’s in Cars.

And we took more fun pics…

Then we drove another hour to Groom, TX. Groom boasts not one but two iconic route 66 atteactions. The first is this leaning water tower.

And the second is the largest cross in the western hemisphere.

Now Nickie and I actually visited this on our honeymoon trip fourteen years ago but back then it was really just the cross. Now they have all kinds of stuff built around it…

As you can see from this picture, they have the stations of the Cross set up around it…

A statue of the last supper…

And even a recreation of the tomb where Jesus rose. And an opportunity to take a really weird fun pic…

After the cross we drove a bit down the road towards Amarillo and saw this dude..

Heh the second amendment cowboy. He used to stand outside a restaurant but now he stands for bear arms. Odd cause but you go cowboy!

Oh we also had to stop at a Home Depot to pick up some spray paint because we were heading to the Cadillac Ranch. 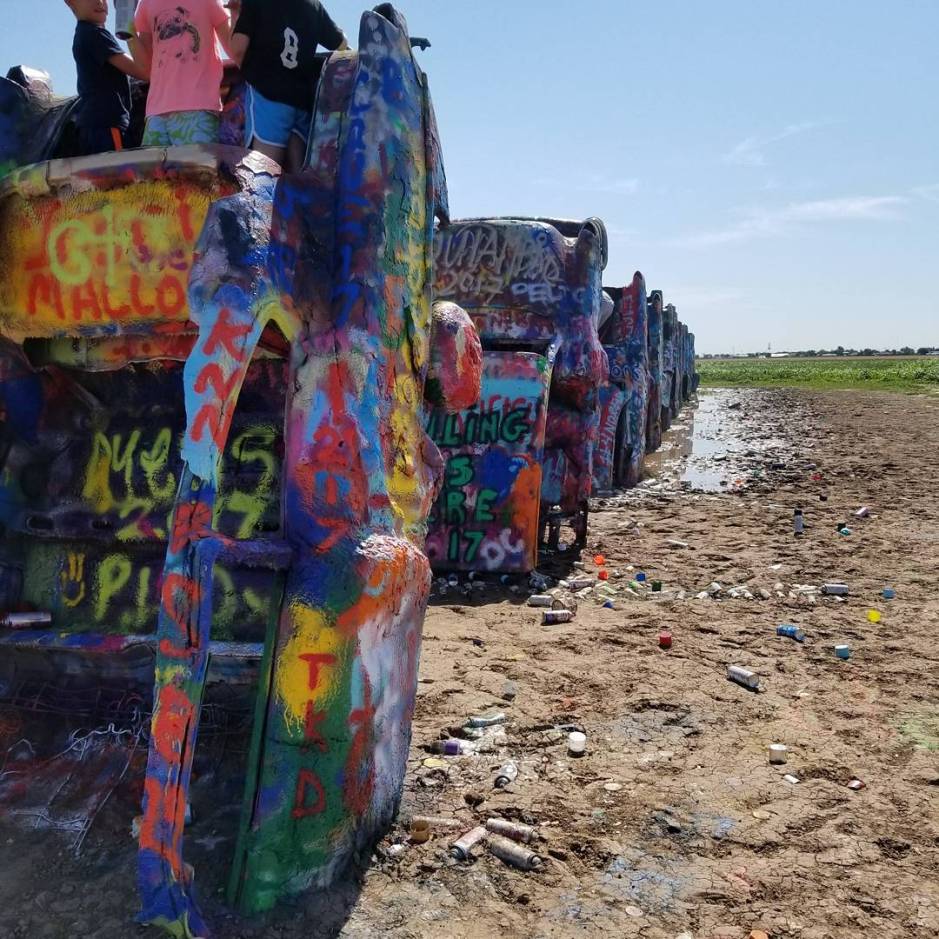 And with spray paint we did play.. 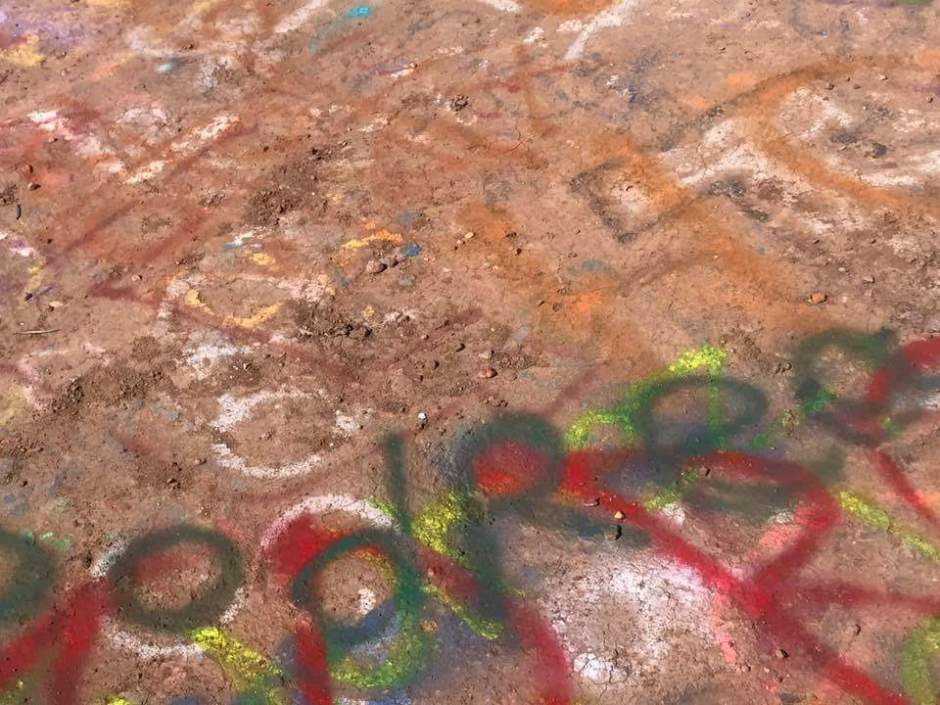 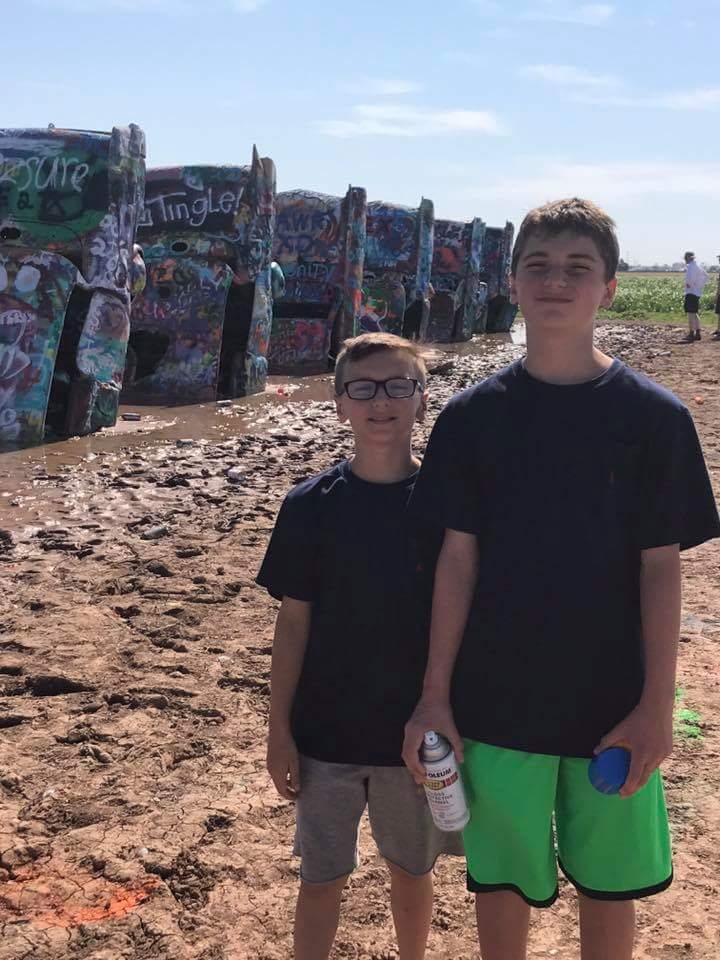 After Cadillac Ranch we decided it was time for lunch and we knew of a spot we wanted to try about an hour down old Route 66.

This place not only offered us sustenance for the long road ahead but it also signals the exact midpoint of Route 66. 1139 miles to Chicago and 1139 miles to Santa Monica. Cool. And I don’t know. It felt like a pretty big accomplishment.

But I mean we can’t just sit around and take pictures all day. Let’s eat.

The Midpoint Cafe is a cool little place and get this – the old owner was the inspiration for Flo. Yes from Cars. Keep up.

This place had a ton of character…

And the food? Yummy.

I got the fried bologna sandwich to atone for not getting the spam sandwich for dinner last night.

Nickie and Myles both got a burger. Nickie said it was the best burger of the trip so far.

Owen got the grilled cheese. 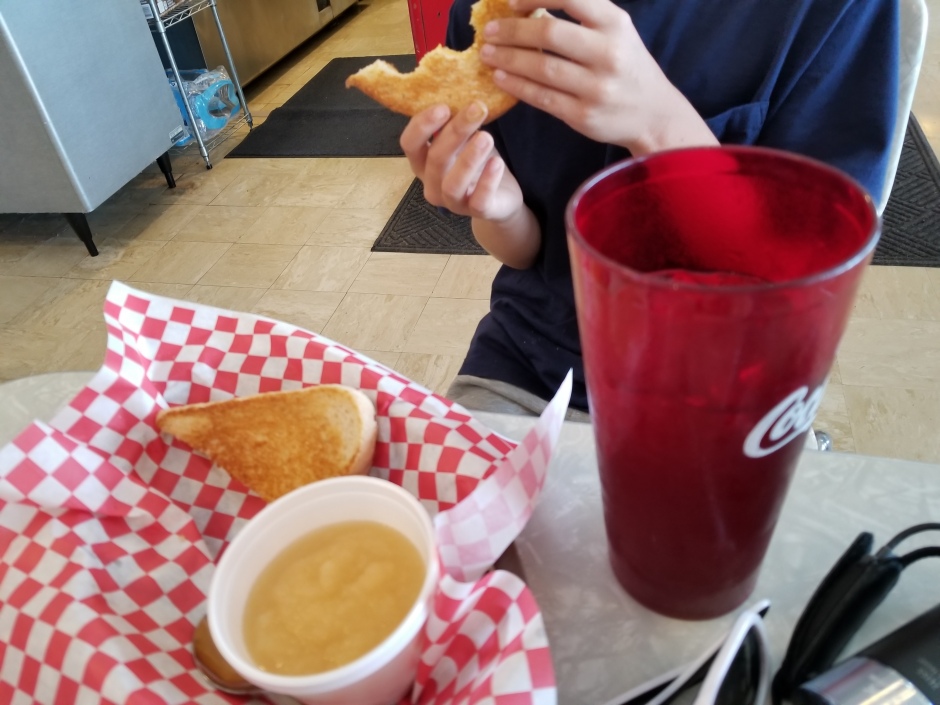 The plan was to be healthy today. But this place is known for its ‘ugly’ pies. So I mean we had to get some pie. Plus I already ate a fried bologna sandwich so.

It was hard deciding which pie to get so we got three slices and split them. Well we were gonna only get two but I had to try that strawberry rhubarb vanilla. Yeah.

We got the aforementioned strawberry rhubarb vanilla, chocolate cream pie and apple.

And then we paid up and we’re back on the road. Well I should mention the people that worked here were super worried about me backing into the pole in the parking lot. I guess a few people have in the past week. They must have mentioned it like five times when I was in the restaurant and then the guy came out to remind me again. And then we saw them all watching from the window as I was backing up. I appreciated the concern but I made it just fine

So here was where we had to make some cuts. We decided to drive the next three hours unhindered but roadside frivolity because we wanted to make it to Albuquerque by 3:30

We did see some awesome scenery as we did it though. 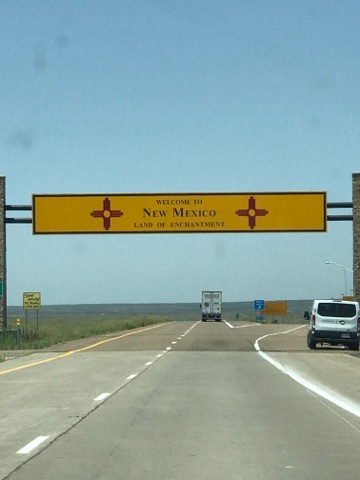 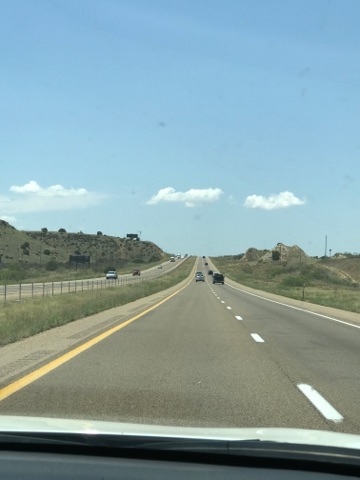 Check this shot out. This was from a gravelly part of 66. Literally no cars behind me.

When we got into Albuquerque, we were definitely ready to check into our room at the Monterey Non-Smokers Motel. But when I walked up to the front desk, the woman said she didn’t have my reservation. I showed her the confirmation from Expedia and she said she was a new owner and stuff has been falling through the cracks. But unfortunately they were all booked for the night.

So I called Expedia and told them of my situation ready to fight for placement in a new room somewhere else. As I was waiting for the woman on the line to figure out the issue o saw that the reservation was for July 8th.

It was not July 8th this day. It was in fact July 7th. I had made the reservation for the wrong night. 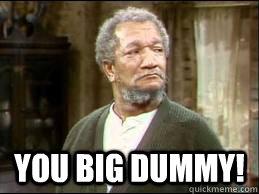 So I apologized profusely and checked my Expedia app for another room elsewhere. Thankfully they had rooms available at the Best Western Rio Grande and it looked nice from the road. And it was closer to Old Town. So we booked it and were on our way.

As we were checking in, Nickie suggested I take the boys to the reason we wanted to be in Albuquerque so early while she brought up the bags and hit the pool. Did I mention it was 99 degrees?

So yeah I took the boys and walked down to the Rattlesnake Museum in Old Town. About a ten minute walk and completely worth it. This place was AWESOME. 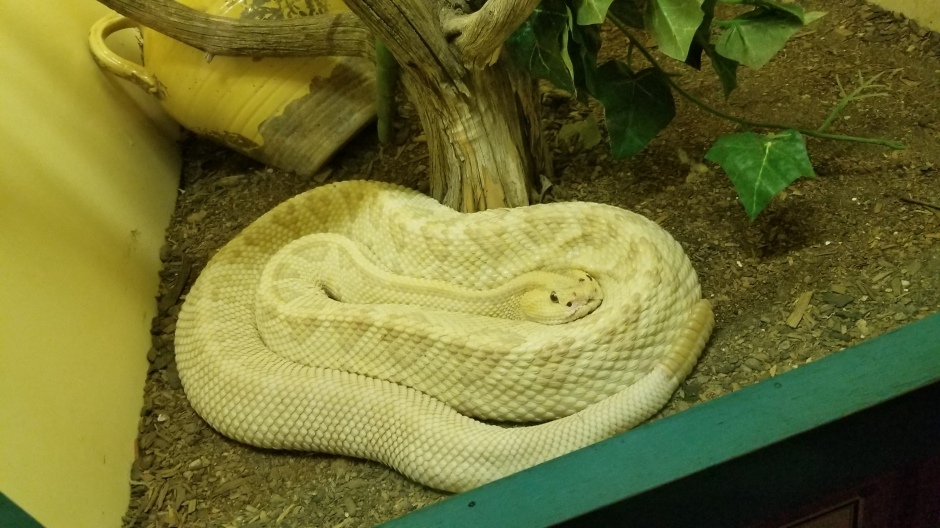 Seriously we loved it. Afterwards we got some snow cones to beat the heat… 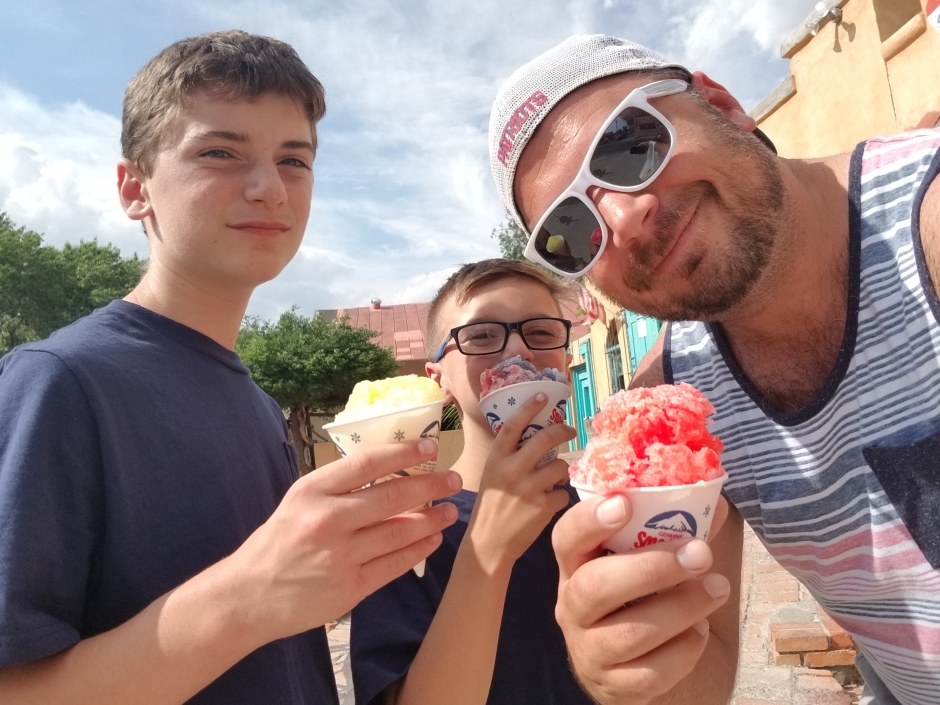 Then it was back to the hotel for some pool time.

After the pool, we all got ready for dinner.

We took the hotel shuttle into Old Town for dinner and as we got off, we saw a familiar site. The fountain we saw was the same fountain where we took our picture fourteen years ago. Check it out….

So awesome and it kind of made us step back and think about how far we have come in life since then. Then, a stranger took that picture for us. Now, our thirteen year old did it. We really have built quite a life.

Based on the recommendation of the woman that worked at the hotel, we tried this place called Church St. Cafe. I should also note she was new to town and had only apparently eaten at one restaurant. But hey, better than no recommendation I suppose.

The place was super kewt.

Nickie and I got a pitcher of sangria and both got the enchiladas. 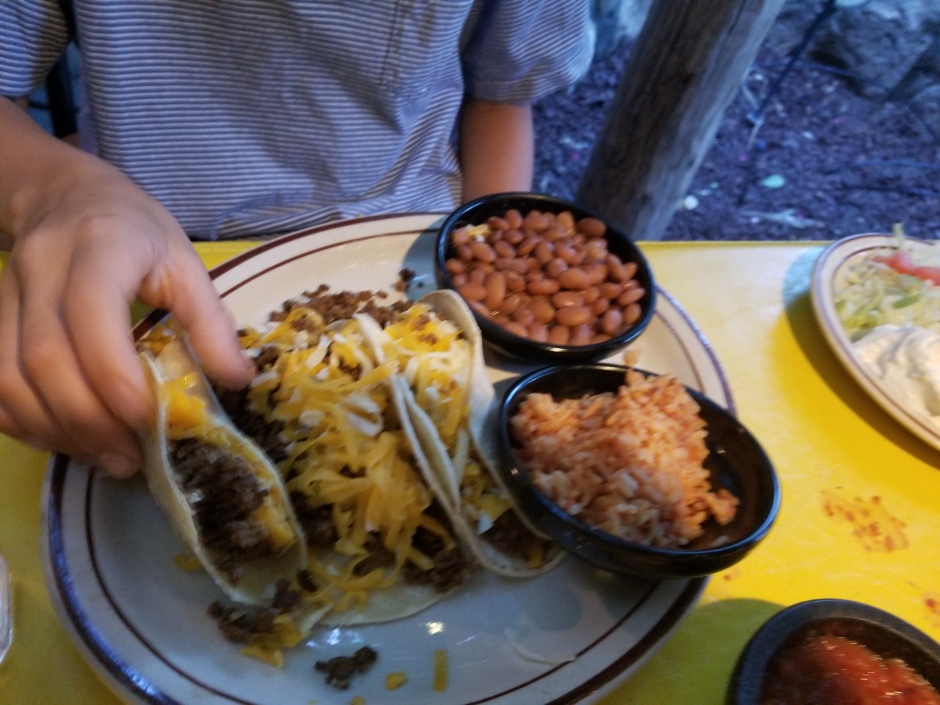 Myles got the fajitas.

The food was good but the service…eh. it was a bit slow. Like to the point where we were worried he forgot us. But yeah the food was very good I thought.

So now as I get ready to go to bed, I am looking back on this day and this trip and just can’t believe we are where we are. We have made it so far and have so much fun to go…stay tuned. We see a giant hole tomorrow.