So this morning I did wake up with Nickie to see the sunrise. I swear I did but the kids did not want to make it down. They wuz sleepy. So I stayed in the room with them and fell back asleep while Nickie went off and saw the sunset. I’m obviously parent of the year.

Thankfully, Nickie took some awesome pics for us .. 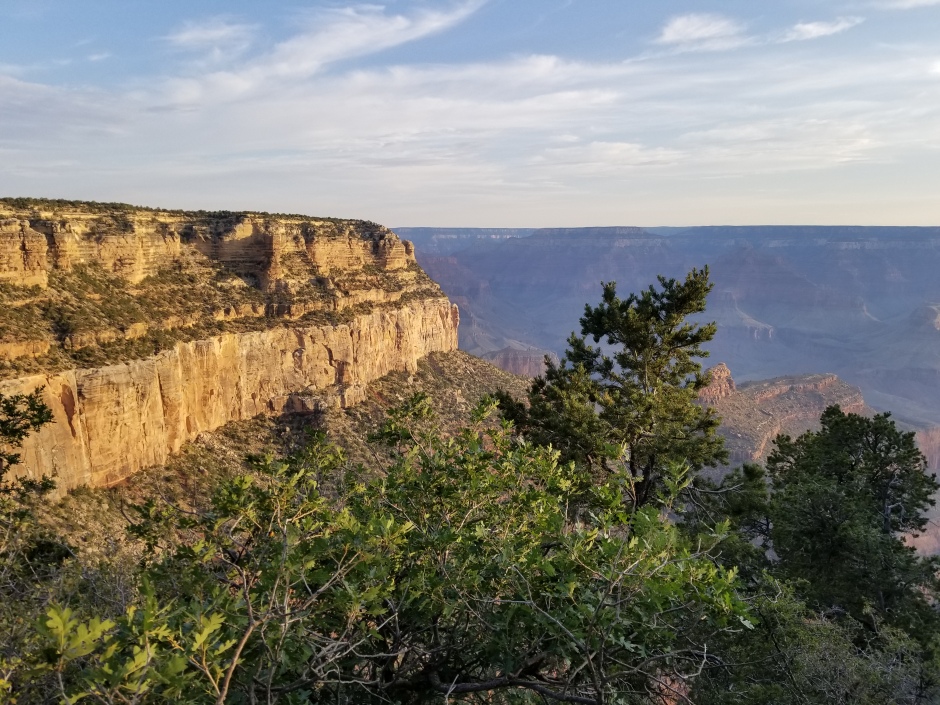 So while I slept…and parented…Nickie went down and took some sunrise pics. Then when she came back, we packed up and got some pics of our own before hitting the road. 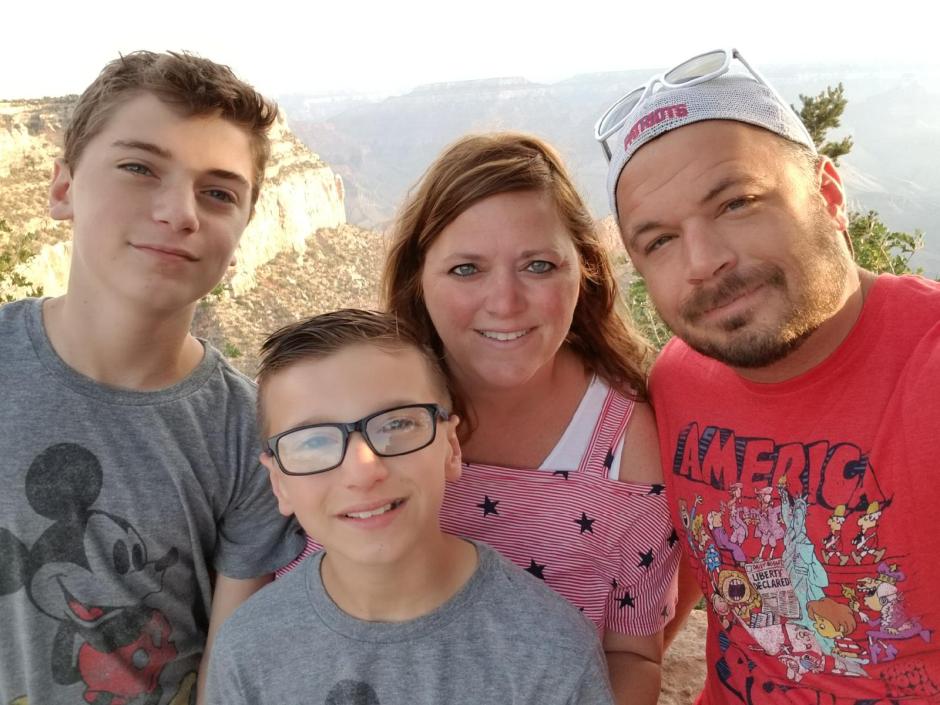 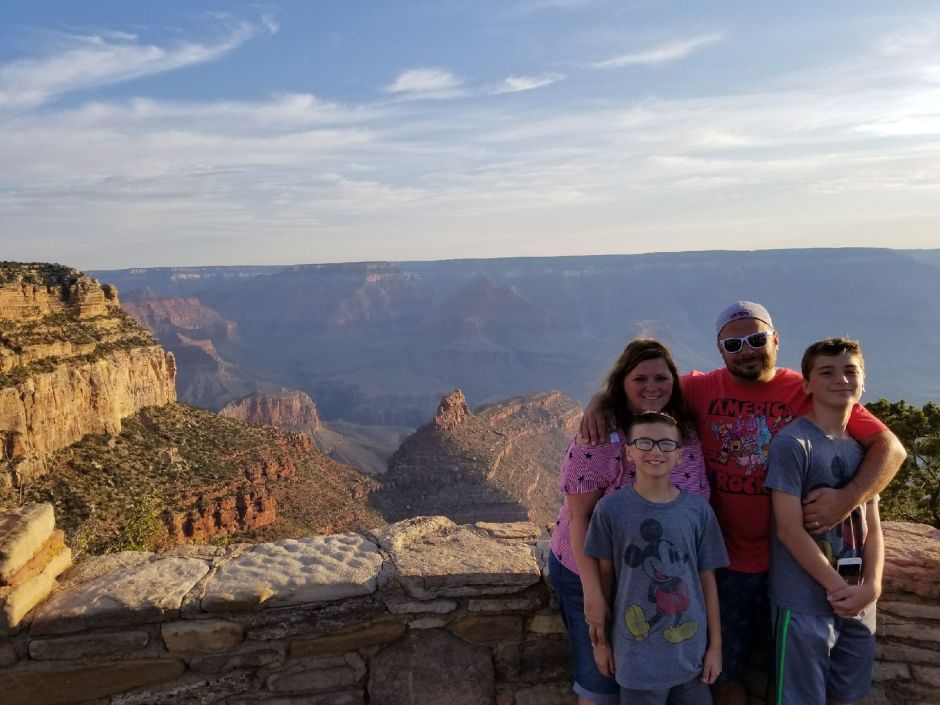 The drive today took us through so many different landscapes. We went from desert to forests to mountains and back to desert. Sometimes the mountains felt so big, we thought we would be swallowed whole.

The pics don’t even come close to doing it justice. 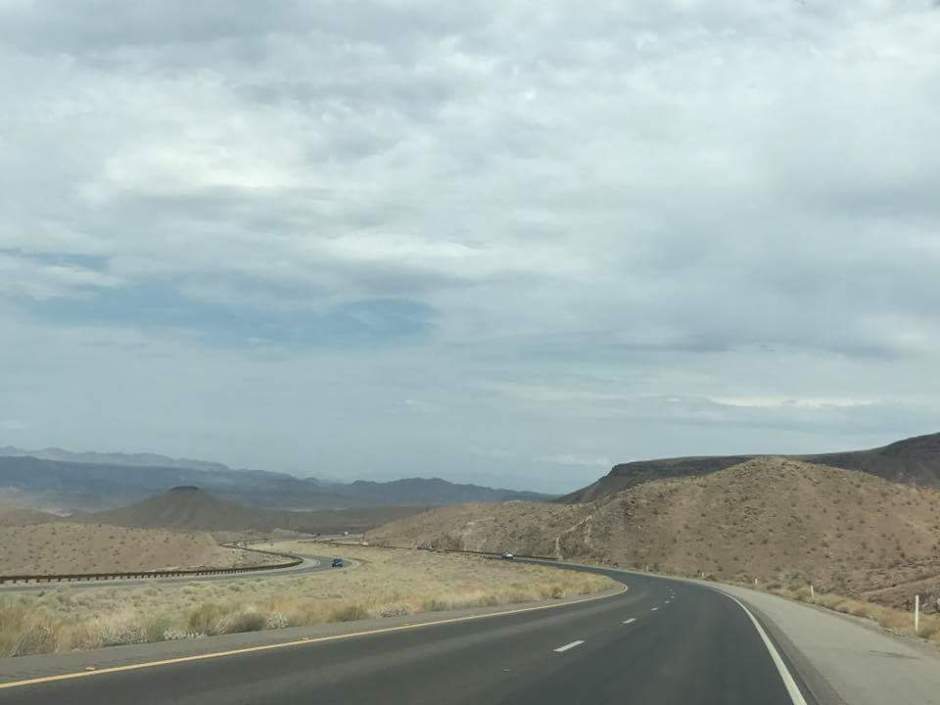 We had about a four and a half hour drive today and definitely wanted to get to Vegas but we had to make at least one stop on the way in Seligman, AZ.

And I know what you’re thinking. You’re thinking,” Seligman? What the crap is Seligman?” And to that I say, “watch your mouth. And also I will tell you.”

John Lasseter has claimed that this town, which was once a bustling stop on route 66 until the interstate came along, was a direct inspiration for Radiator Springs. Conversations with the barber in town, Angel Delgadillo, led to much of what became Cars. 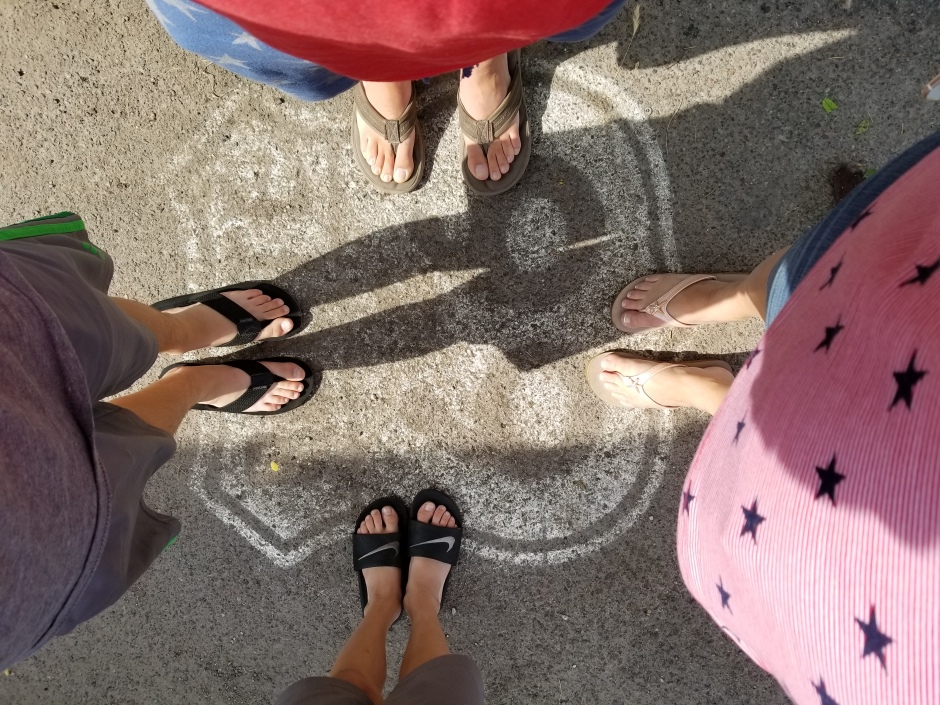 Angel is still a barber in town and his brother once owned the Snow Cap, which is a Route 66 icon. This restaurant is full of gags and what not but we could only view it from the outside since it wasn’t open yet. 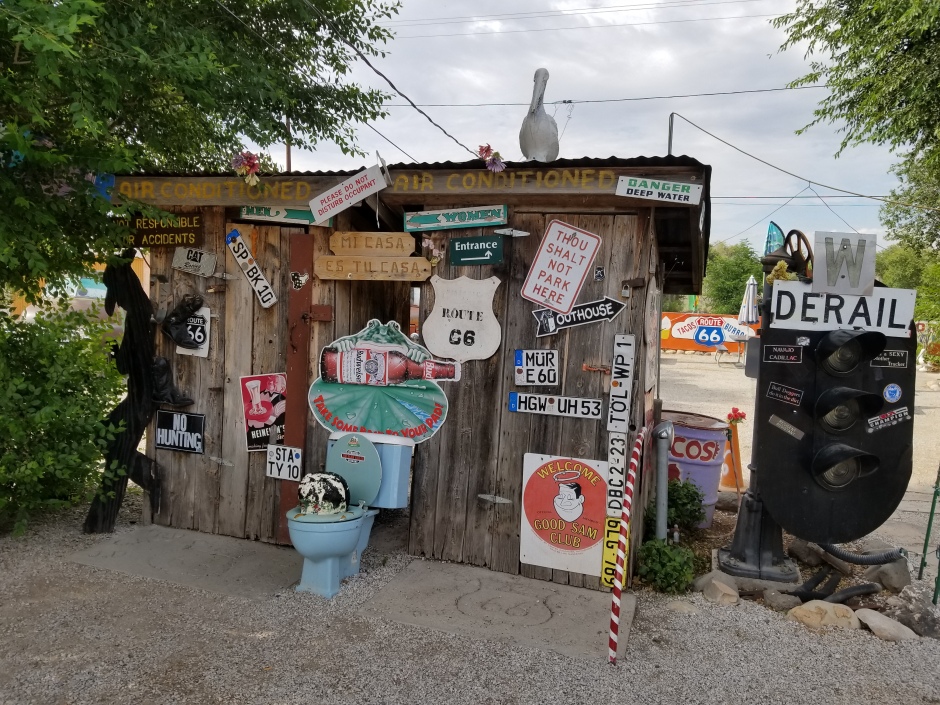 Angel was playing a band gig (he’s in his 90’s by the way) so he wasn’t around but we still saw his barber chair and visited his gift shop in town.

This was parked right outside.

And inside was pretty awesome as well.

After Seligman we hit the road and pretty much drove the whole way to Vegas. We did drive over the Hoover Dam but the road into the Dam was too Dam long so we skipped the whole Dam thing.

Then we arrived in Vegas and checked into our amazing room at the Palazzo. 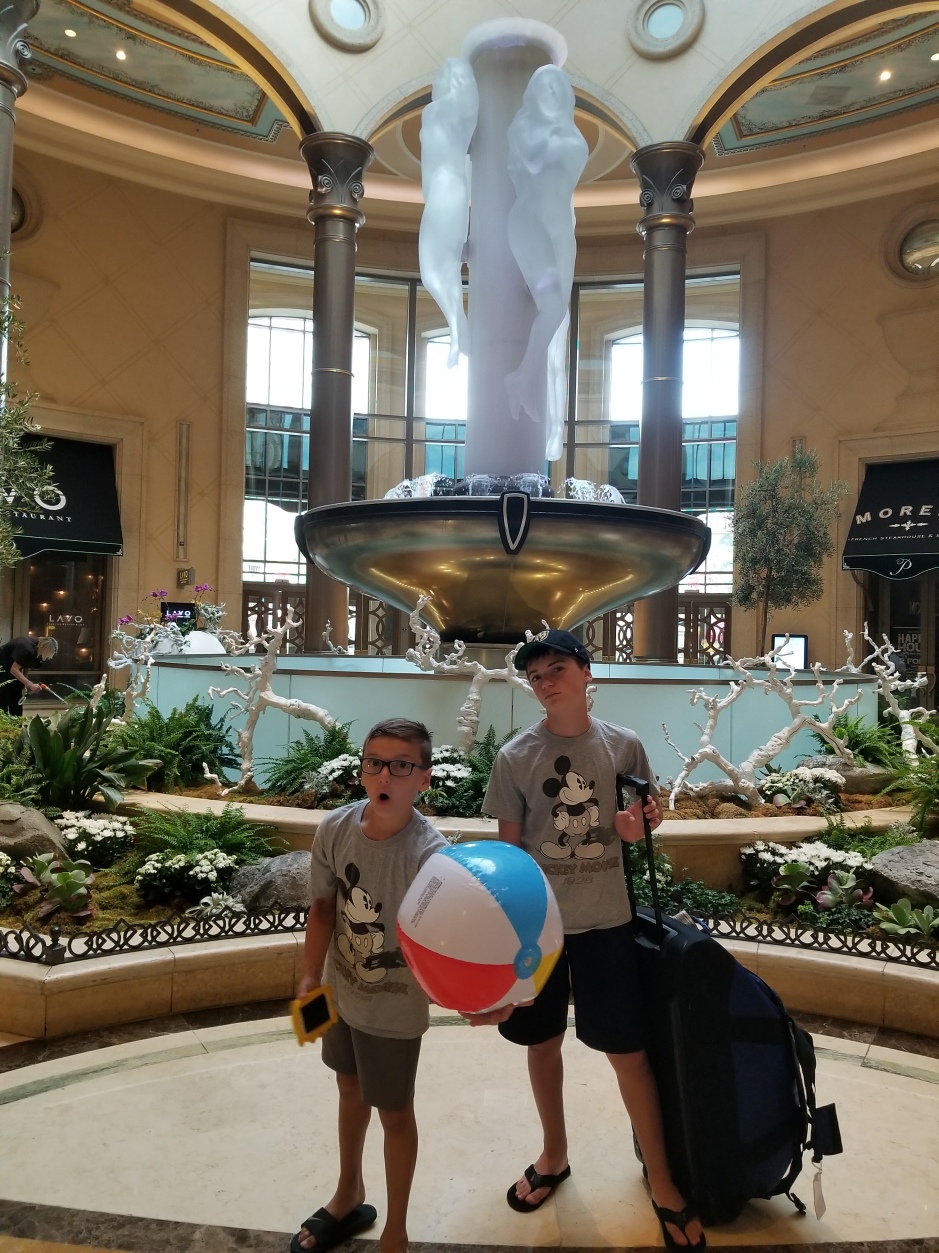 They upgraded us twice because of my Expedia status and gave us a beverage credit. Which works out well. Because we love beverages. 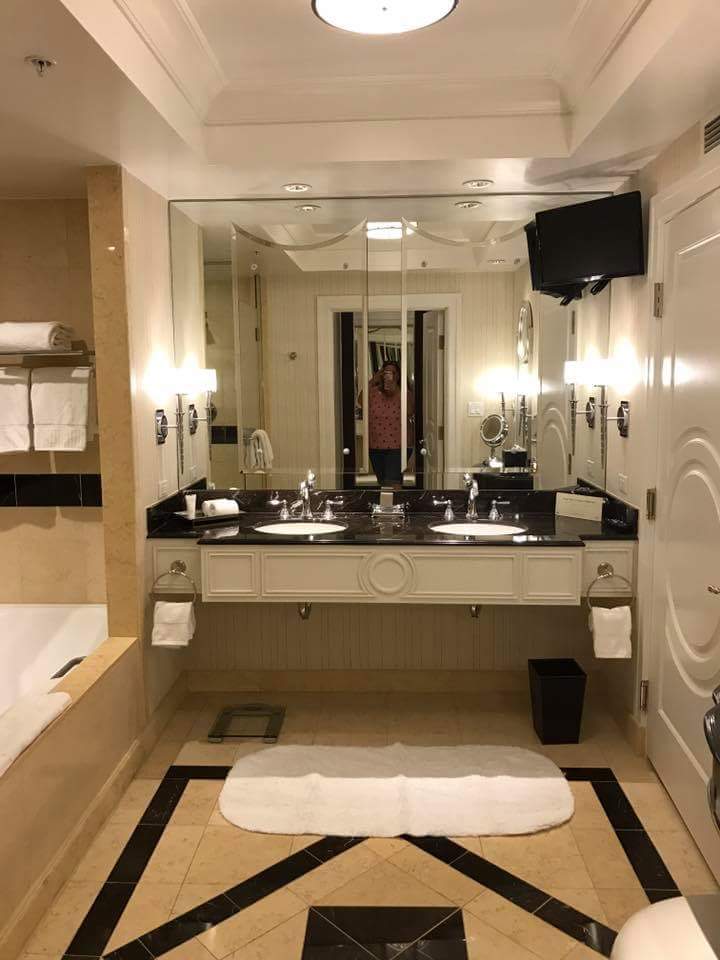 We quickly changed into our suits and headed right down to the pool for some swimming, lunch and cocktails. Nickie and I split a turkey sandwich and some chips and guac. Oh and we got some mai tais.

The kids split a pizza but they hardly noticed it because of POOL.

Then we went back up to the room, got changed and hit the town. Which was hot. Like death hot. Like 113 degrees. Holy hotness.

We first made our way through the Venetian. We considered a gondola ride but every time I consider paying thirty bucks a person for such a thing I then quickly reconsider it. 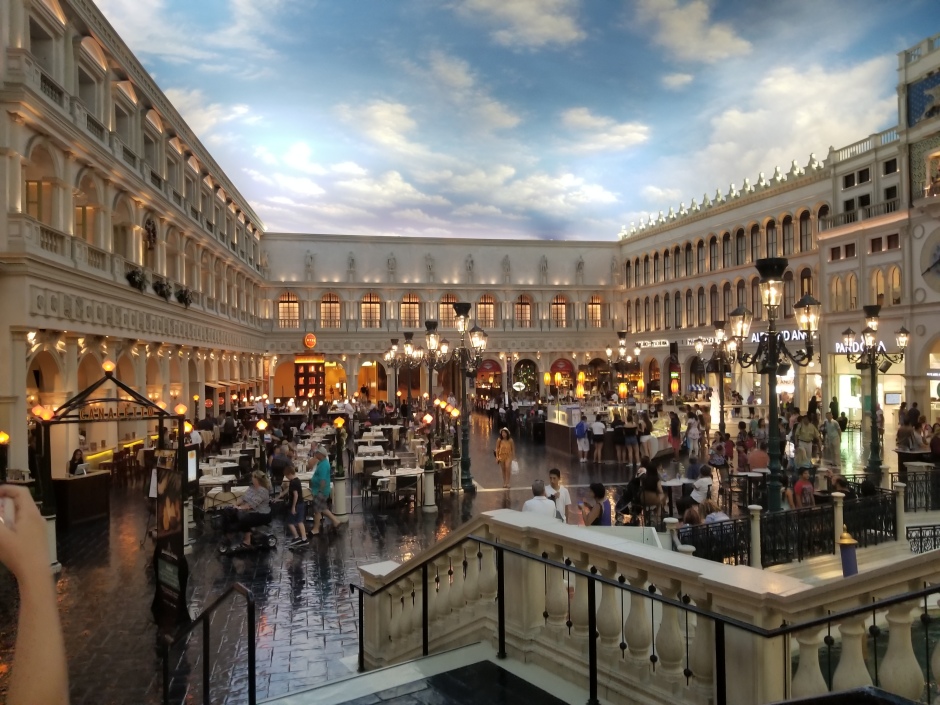 Then we made our way outside and walked over to the Mirage across the street with the intention of seeing the white tigers. But again the cost just didn’t seem worth it.

So we checked in at the box office to see if Terry Fator was doing a show. But unfortunately he wasn’t.

We walked over to Caesars with the intent of hitting the Bacchanal Buffet but the wait was 90 minutes.

So just to see, I called Vegas.com to see if there were any shows that weren’t too expensive and good for the family.

The super helpful woman on the phone suggested Matt Franco at the Linq. Which worked out since we are all huge America’s Got Talent fans.

I bought the tickets and we walked over to the box office to pick them up. While there, the guy suggested we hit the buffet at Harrah’s.

My first plate had some sushi, shrimp, mac and cheese and prime rib. Notice I said first. I also had a whole fried chicken dinner at one point.

They also had a deal for $15 that added unlimited beer and wine so we of course did that and they brought us each a bottle. So I mean….we obviously got our money’s worth. They even gave us a to-go cup to fill.

And of course we got dessert. Hello ice cream

I thought it was a really good buffet. Not too pricey by Vegas standards and while not fancy, it was legit good food.

Then it was time for the show!

And it was soooooo good. Such a good first Vegas show for the kids. Funny, great magic and no toplessness. We can save that for their second show.

After the show we grabbed a couple of beers and took the kids around the strip.

We missed the last volcano show at the Mirage but we caught a couple good fountain shows at the Bellagio, including “Uptown Funk” which the kids loved. 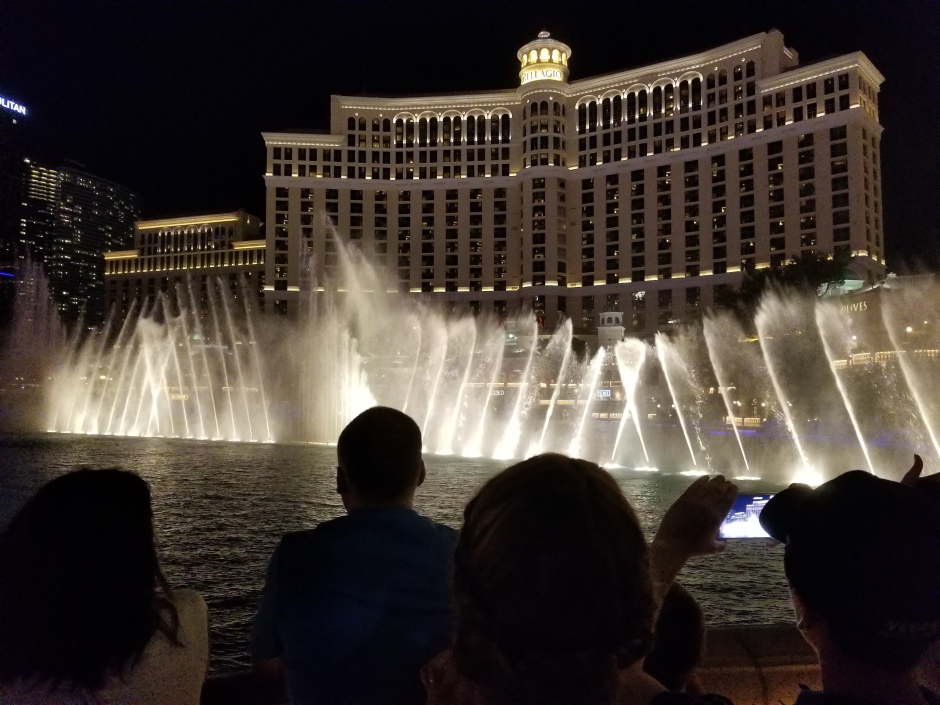 We walked back to the room and ordered the kids a movie – Lego Batman – to watch while Nickie and I walked downstairs to play a little blackjack.

Now this was kind of a big deal. We left Myles in charge and he did a great job as babysitter. Man that kid is getting so old.

So yeah, we played some blackjack for a couple hours. And we were prepared to lose 400 total. And since we only lost 100, I’m considering that a win. Right?

So such a MONEY day in Vegas. Owen has declared it was his favorite day of the trip so far. Myles was less impressed.

And it was an incredible way to end phase 2 of the trip. Onto California!!!