Hey everyone. Welcome to our first post detailing our super awesome terrific vacation at Beaches Turks and Caicos! I know. It’s not Disney. But I mean there are still characters. And alcohol. So. Kind of the same thing.

And unlike some of my other travel posts, this won’t be a live blog from the trip. We heard the WiFi would be spotty at Beaches and unlike our other trips (Disney, the road trip), this was really supposed to be a relaxing vacation. Well, relaxing for us – we still had a bunch of stuff planned. But being that type of vacation, I didn’t want to be making notes on my phone all day and staying up writing all night. I really wanted to take a break.

So this is a post-trip report. But I will still post each day to give you the illusion of real-time. It’s like I am lying to you. It’ll be fun!

Anyways, this first post, like most of my first posts, is kind of a cheat post since it’s really like a detail of the day before the actual trip. So kind of like…Day 0. Which is sort of a thing on this blog. So welcome. To Day 0.

Oh wait. Actually. Please now take a trip with me back a few days. To Day -3.

Yeah. Actually, this trip started like well before Day 0.

Pfft. Whatever. My blog. My rules.

So those who have read my posts in the past know that Nickie and I give the boys and each other what we call airport bags. Usually bags or some sort of container that, well, contain, a bunch of little presents to celebrate the trip.

But yeah, 15 years. So I wanted to get Nickie something special in her airport bag. And on Tuesday it came. So I just couldn’t wait to give her the whole bag. So I gave it to her on Tuesday. And then she gave me mine. We aren’t good at the whole patience thing.

She gave me a bunch of awesome stuff – candy, gum, pretzel rods, a Star Wars cup, some whiskey nips (for the plane) and the new James Comey book. And an amazing Rose Gold Flamingo float. Like this thing is hella-amazing. And the kids put a new Bruins hat in there. So lots of good stuff. That Flamingo float is bomb. Plus look at that bag. Doughnuts. 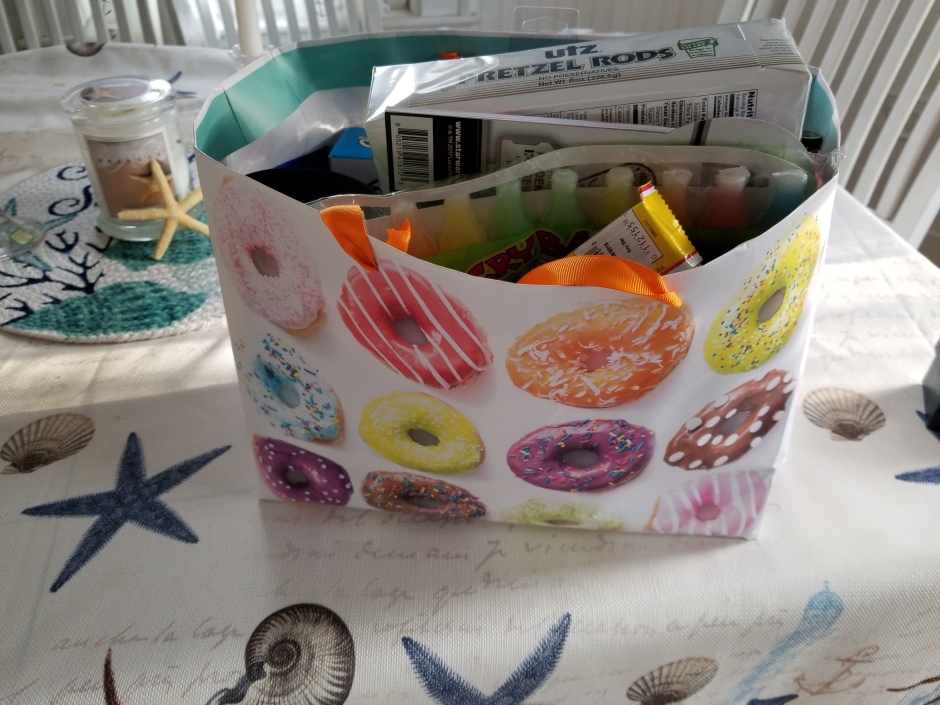 Nickie’s bag in itself was super cool – shaped like a lemon wedge with little Mickeys all over it, it’s a cooler for us to take beers to the beach. Inside was some candy, lotion, a candle for our room, a new book, a magazine, lip balm, a Stitch wallet, a Lilo and Stitch headband, a Moana towel, and these super cool Little Mermaid beer koozies. And of course she got a float. A giant unicorn float.  These are in addition to the two pizza floats the kids got from the Easter Bunny.

We were legit planning on taking over the pool.

But none of that was what I picked up on Tuesday. I got her the Enchanted Belle Rose Gold ring from Zales’ Enchanted Disney collection. She had mentioned a little bit ago how much she liked it so I was super psyched to surprise her with it.

Ok so fast forward…To Day 0. Yerp. Still not getting to the actual Turks & Caicos part yet.

nd still had to send the kids to school. Womp for them. Nickie and I, however, had the day off. So non-womp for us.

This place is SO GOOD. Seriously. And they have the best mugs…

OK so Nickie and I have been doing Weight Watchers for the past 3 months but decided to take a break for vacation. Well. That break? It starts now.

I got the chocolate chip pancakes, bacon, sausage and home fries. Nickie got a grilled blueberry muffin, home fries and scrambled eggs

After breakfast, Nickie and I had to pick up some last-minute things at Wal-Mart. We needed some travel size Febreeze (because I am really concerned with smelling like food) and had heard we should pick up some insulated tumblers. So we went with some Ozark Trail 30 oz. ones. I know. Yetis are better. But they also cost like 4 times as much. This was really what brought me to Wal-Mart. Typically, I think Wal-Mart is where dreams die but they are the only place that sells these things other than Amazon which ain’t nobody got time for. And I mean, I need my frozen drinks to stay frozen. I’m not made of stone, you know.

Oh, I also bought a beach towel that looks like a giant pizza. I NEEDED IT.

Then we went home, cleaned the house a little bit and got things in order for our dog/house sitter, Amanda. And we cleaned out the DVR. Got to watch a little Riverdale, some Jersey Shore. Oh, did I say I was a 5 year-old mentally? I meant I was a 14 year-old girl.

The plan for the night was to stay at the Comfort Inn near the airport. This was a change of pace for us as we typically stay at the Hilton. But eh, we wanted something different this time around. Also, none of this is necessary since we live like 10 minutes from the airport. But we sort of have a problem with waiting to vacation.

So we said a sad goodbye to this cutie…

Drove to the Comfort Inn, checked in, and got our bags into the room. 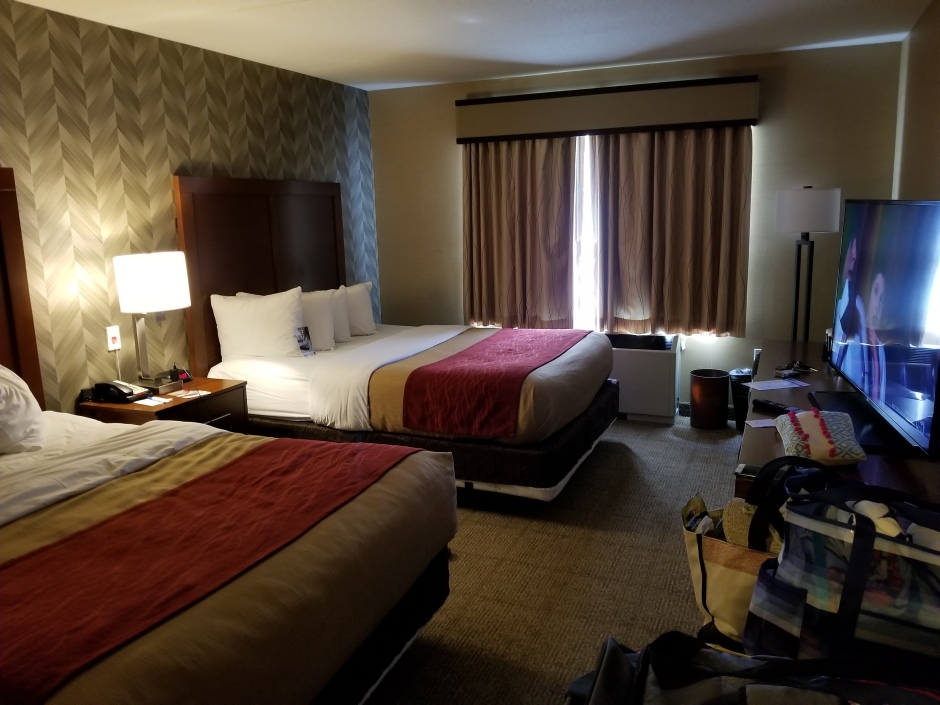 Then we headed downstairs to grab a cup of coffee and have some chocolate covered pretzels. Oh and played with some filters.

And then Nickie said she would go back and get the kids so I could relax. On account of it was almost my birthday. This was literally the best present I received.

Not only did I get to relax. But look at what was on TV….

So I watched the rest of New Hope and some of the beginning of Empire and then decided to pour myself a whiskey, head to the outdoor patio, and read a little of my new book. 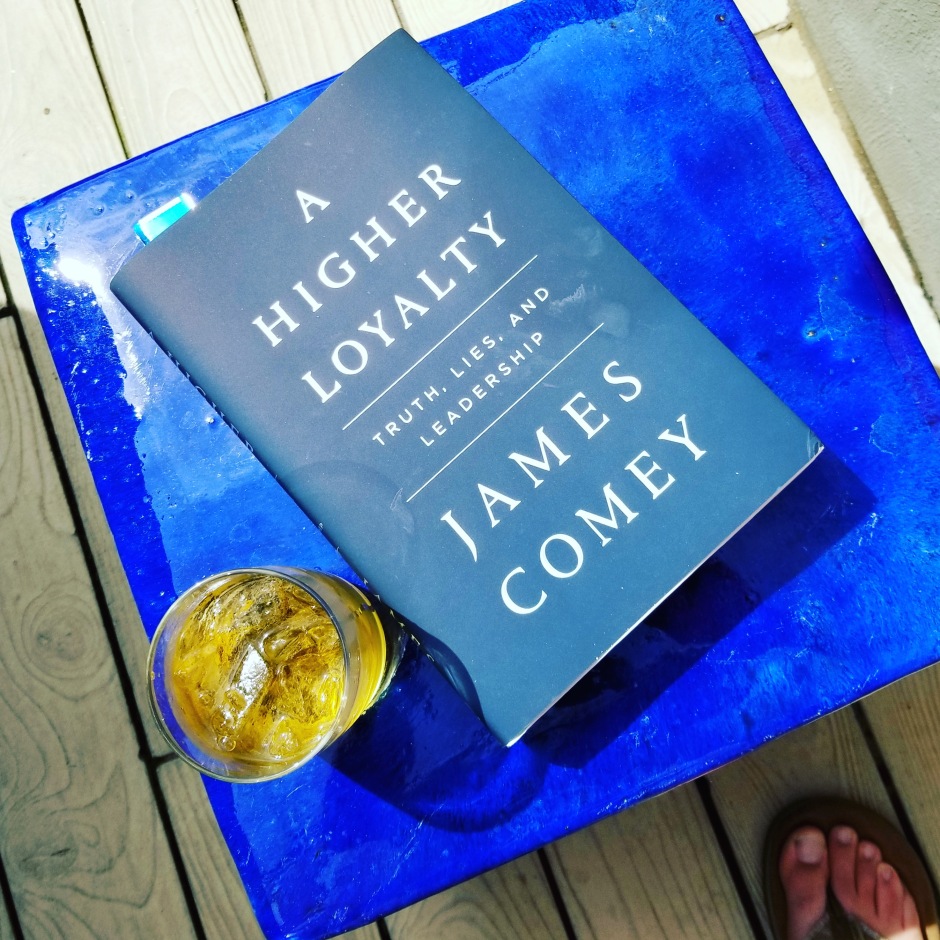 The day was sunny and hot and really felt like the beginning of vacation. Which was odd. Since we were in Revere, Massachusetts. Which really NEVER feels like a vacation.  Although oddly, Revere was also where we started our epic road trip too.

Nickie texted shortly thereafter saying she and the boys were in an Uber on the way over and to order her a drink on the patio. But, come to find out, there really is nowhere to do that. The restaurant on-site is not technically part of the hotel so they wouldn’t let me bring anything out. And with her wanting wine, I didn’t want to open any of the bottles we brought since we figured they were all well-packed (though….well, we will get to that in the next post.)

So being the alcoholic MacGyver that I am, I downloaded the Drizly app on my phone and ordered two bottles of Malbec to be delivered to the patio. I know. I am a pretty amazing husband. 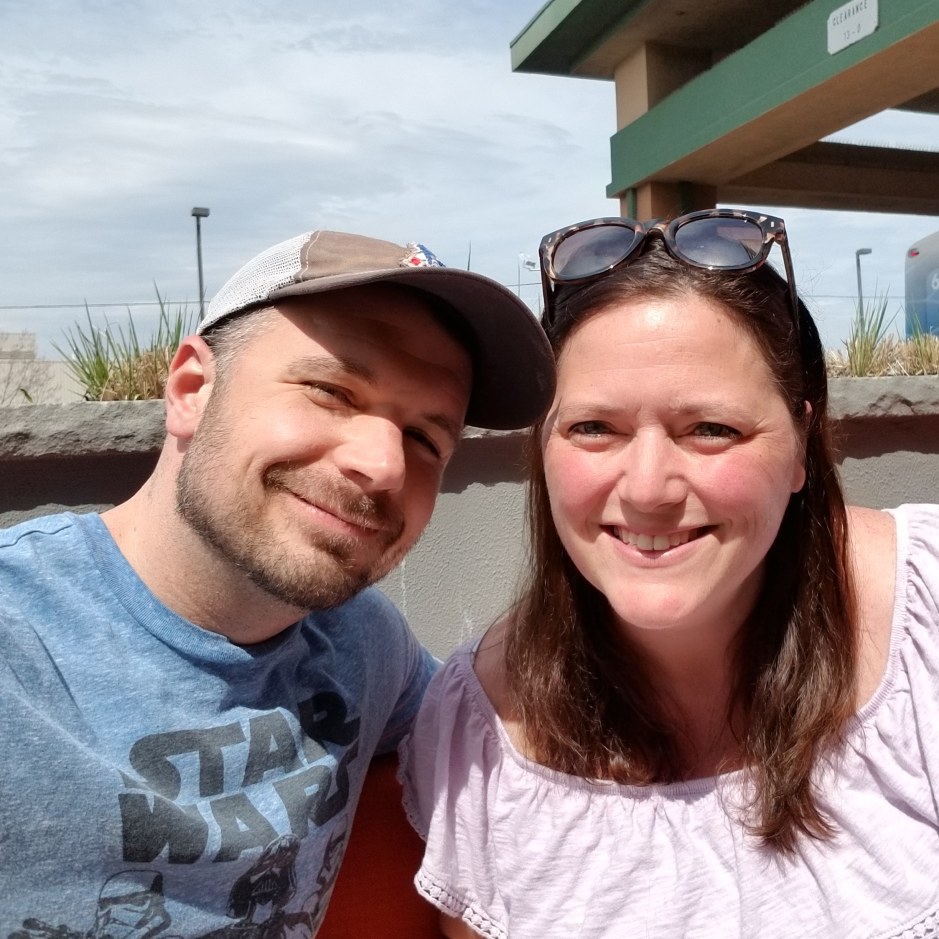 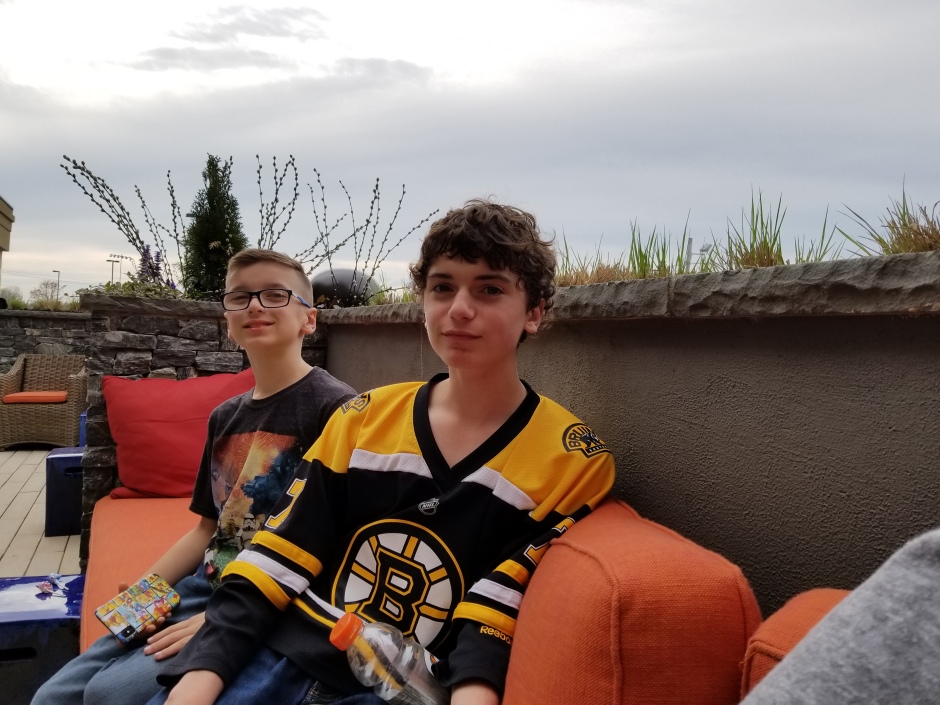 The hotel had also put out some soft (well, eh….kind of hard by this point) pretzels and mustard and Nickie got some chips and hummus (and Gatorade for the boys) from the pantry and we had a little cocktail hour outside.

We then walked back up to the room so the boys could open their airport bags. Well airport pails I guess.

We then headed down to the Margarita’s in the hotel for dinner. 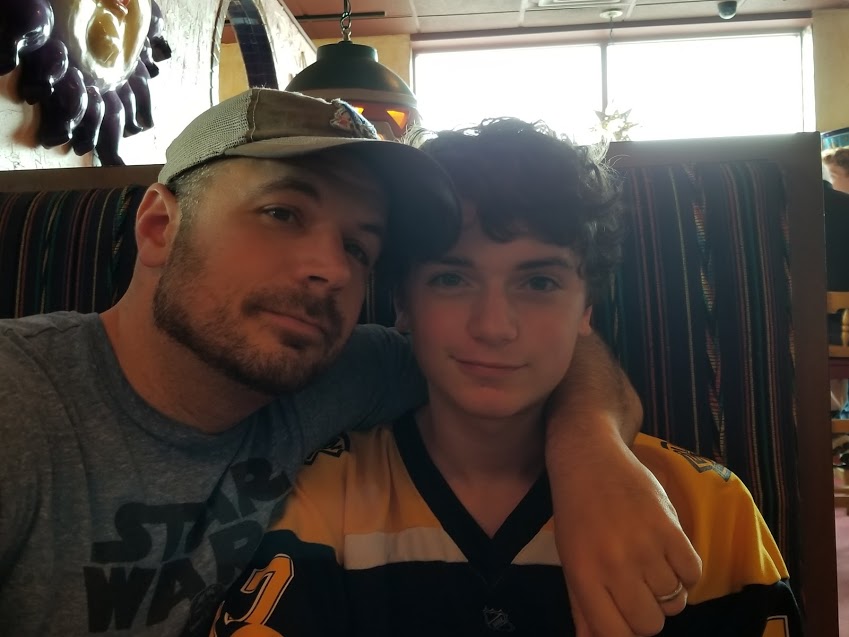 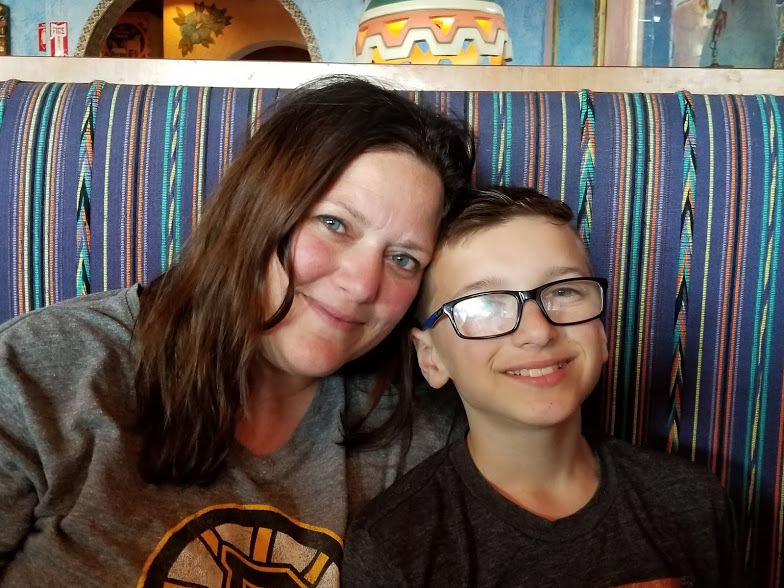 Did I mention we were officially off Weight Watchers? Because well, we definitely were at this point.

I started with a margarita flight…

And for dinner, the boys both got fajitas while Nickie and I split a bunch of apps (chips and guac, chimichangas, nachos, Mexican street corn.)

The boys put some money in the jukebox. Myles of course played only Vampire Weekend while Owen played some OneRepublic. But, this was one of those jukeboxes that allows people to like cut in line. So they each got like one song off before we were treated to an onslaught of death metal, Fat Joe, and Nicki Minaj. Now, I love Nicki Minaj as much as the next 14 year old girl trapped in a man’s body but this was A LOT of Nicki Minaj.

Well, not really. We just sort of cowered in our booth and ate our pain.

We did get to watch the Bruins for a bit but they ended up losing and gave Tampa Bay a 3-1 lead in the series. That wasn’t great.

This day, though, was a really nice start to the trip. For a low-priced hotel near the airport, the Comfort Inn was really fun. The room was clean and comfortable (I mean, it is the Comfort Inn I guess), the nice little touches like the outdoor patio and snacks, and the on-site restaurant were really all we needed. Plus it got us closer to the airport. Which was good. As we had a VERY early start the next day. Like, VERY early. But I will save that for my next post. Which is actually a Turks & Caicos post. Get excited.

I mean. Or don’t get excited. I am still gonna write it.