Yup, another Healthy Disney night. And I have been a bit lax as this one happened like over a week ago. But to be completely honest? I just stopped crying from watching it.

I am still a little weepy.

But yeah, we are continuing on our Healthy Disney Nights to shed those pounds we put on drinking Miami Vices and eating jerk chicken. Which is like real chicken, but way more snarky.

And of course we are doing this in prep for the November Disney trip mostly. I mean, we are OF COURSE going to be eating our faces off then. Oh, and that reminds me. Remember that post where I talked all about our dining reservations and some of our plans for November? Yeah, so much of that has changed. I will have to post an update but we have a little hotel switcheroo, some new places to eat, some new experiences planned, and even some pretty major transportation changes that have extended the total vacation time to nearly two weeks. Yeah.

Actually, I will save it all for the Pre-Trip report since I AM SURE there will still be all kinds of changes going on.

It’s like we make plans…just to break em. Don’t even get me started on next summer’s road trip. COMPLETELY different.

But that’s a post-no-one-will-read for another time.

Like I said, this was close to a week ago, when we were this many days away from our upcoming trip…

And I don’t know. I know it’s triple digits still but we are way excited for this trip. Like, we have the Cape coming up. And the road trip we have to plan for next year. Plus like work and school and life. But seriously, we are like all Disney all the time these days. It’s gonna be a rough forever amount of days.

Ugh this movie. I am in love with Inside Out. I actually wrote about it when it first came out here and pretty much all still rings true.

This one still kills me. Pixar is pretty much the king of making grown men cry but this one hits me super hard. Like Toy Story 3 hard.

And I didn’t think it possible, but I feel like subsequent viewings have made me even more of a mess. Not only do I cry when (spoiler alert) Bing Bong has to sacrifice himself or when Riley returns from running away, but I actually well up at other parts leading up to these key moments. Because I know what’s coming.

I am so invested in these characters that I get sad knowing what’s coming for them. When I see Riley starting to struggle with leaving childhood behind, I feel it. That scene when she cries in class has now become a pivotal “watch Dad cry” scene for the whole family. It’s good times all around.

Fine. Make fun of me. But I can’t imagine anyone who has ever been a kid not getting complete feels when watching this movie. And if you’re a parent and you don’t get choked up watching this? Well, I just assume you don’t love your kids as much as I do.

Being the father of a now-14 year old that has already sort of had to make this transition and an 10 year old gearing up to do the same, this movie has actually helped me. Whenever Myles has had times where I knew his emotions were getting the better of him, I thought back to the chaos in Riley’s head and tried to remember what it was like for me going through that age. It’s helped to create a sense of empathy that I think may not always come on its own when you’re dealing with a moody pre-teen. And I swear, this movie has made me take a step back and try to put myself in his shoes whenever he…erm…has outwardly struggled. That’s a special kind of movie.

First off, we had company again for this one. And once again, it was my mom. Aw my mom.

And Nickie like totez handled the decorating. She got a bright red tablecloth and some rainbow plates. Which worked out since the next weekend was PRIDE weekend. Much love.

Anyways, yeah so the room was all bright colors and what not. It felt very much like a 12 year old’s birthday party. And by “a 12 year old’s” I mean “my.”

So a big part of Inside Out is how all the emotions try to save Riley’s memories.  At least I think that’s what it was about. I kinda forget.

Because I said “memories.”

And then I said “I kinda forget.”

Anyways. Yeah, memories. So we printed up these “favorite” sheets off the Interwebz. 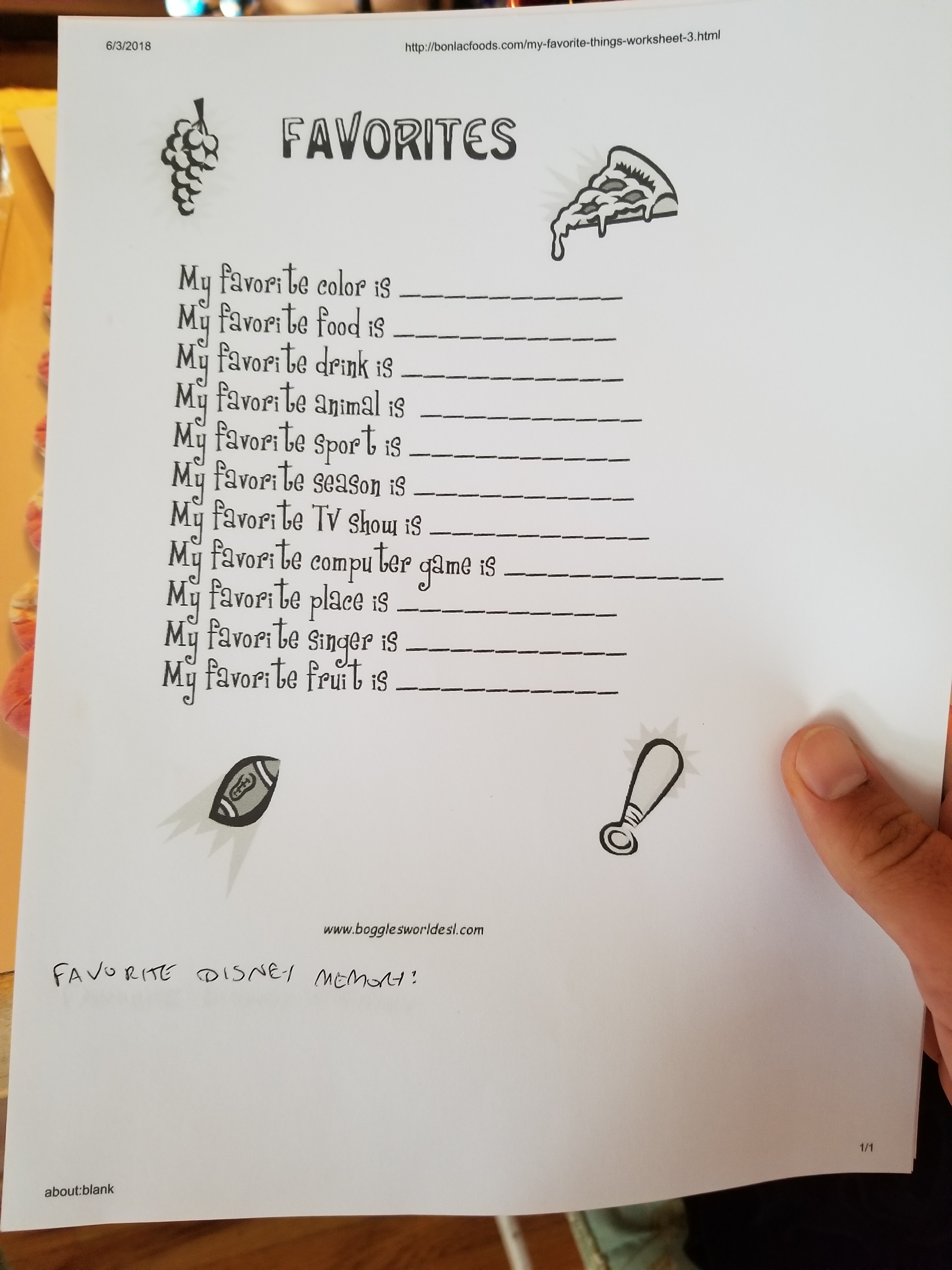 We filled them out…

…and then we all tried to guess what everyone else’s favorite things were. It actually turned out to be really fun.

Then we put them in a memory box/old Star Wars shoebox.

And I know what you’re saying. You’re probably saying, “Oh but wait. These sheets are about favorite things. Not memories.’

And do you know what I’m saying? I’m saying, “SHUT UP SHUT YOUR MOUTH.” Look, if you want to do something more appropriate, YOU write a blog. Ok? OK? 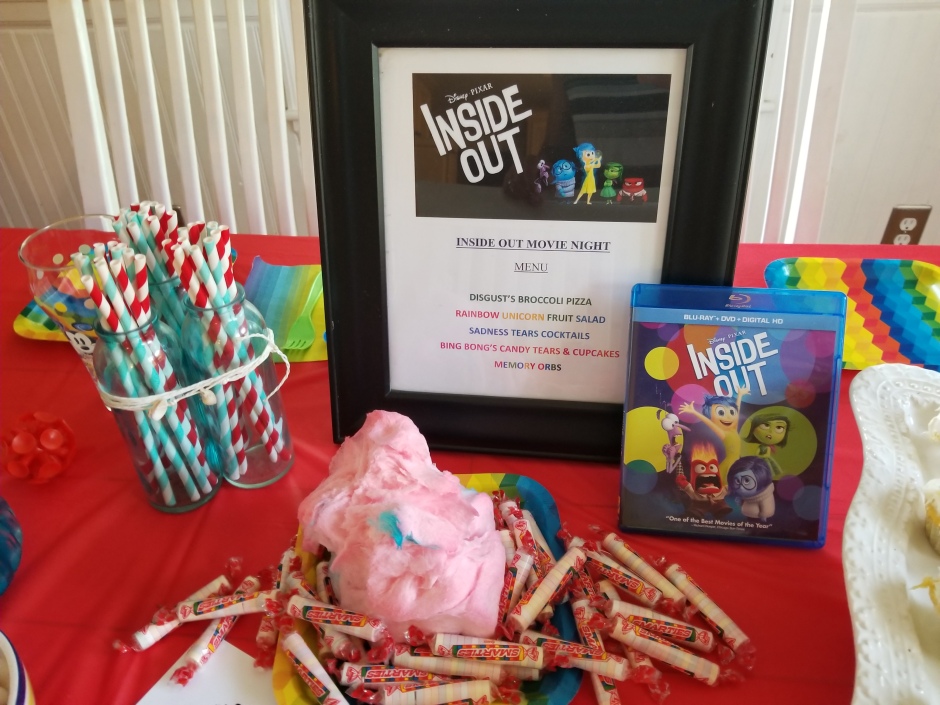 There was A LOT of food here. And full disclosure, not alllll of it is healthy. We had some kid food here too. And really, there is no way to make AirHead Bites healthy. Believe me, my team and I have been working on it for years.

In case you can’t read the menu, here is what we had:

So yeah, lots of food. We also made regular non-healthy pizza for the boys. It had pepperoni on it. And if you are looking to lose weight, don’t be like my kids. They are often a good example of what not to do.

But there WAS also fruit. I swear. 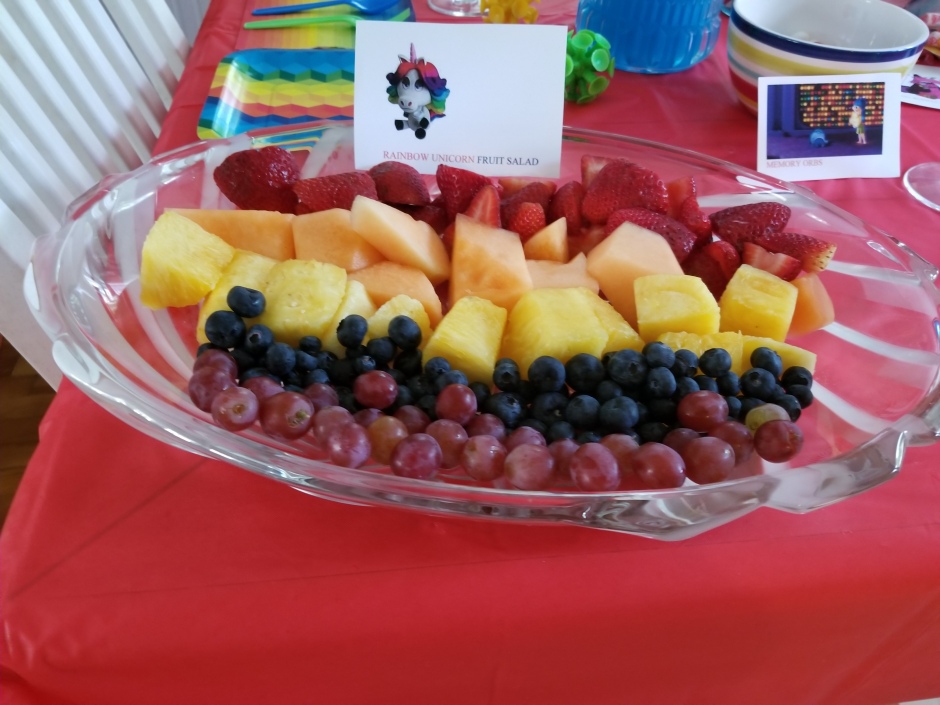 As mentioned, we used the 2-ingredient dough recipe that’s like all the rage these days. Honestly, there are tons of recipes on the web for it, like here and here But I would rather you be like in forever gratitude to me for providing it to you, so here you go…. 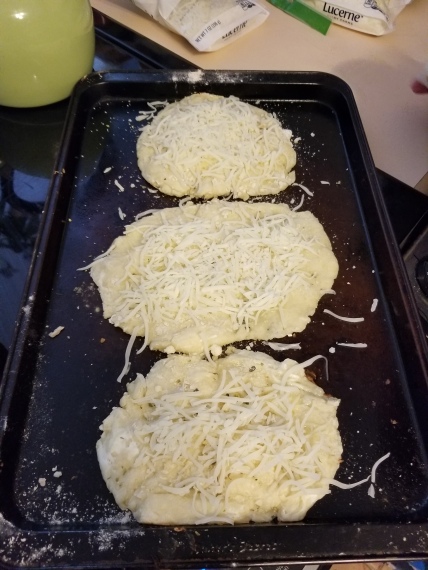 Like I said, we made these into mini cupcakes. For regular sized cupcakes, this makes about 15 and we ended up making like 45 or so mini ones.

So, if regular size cupcakes, these are 5 WW points each. However, for the minis we estimated about 1 point. 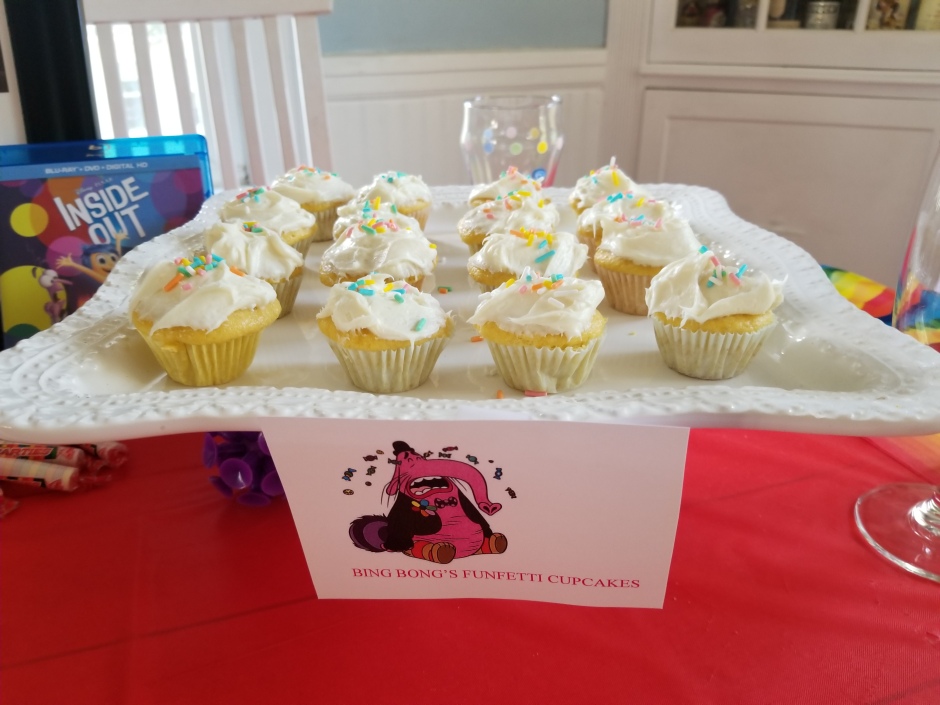