Day 7 has some comings and goings of people, which is both happy and sad. On account of coming AND going. Just getting you prepped. As always, if you wanna catch up, you can check out Day 6 here.

So Day 7 is officially Star Wars Day on our trip. What does that mean? Well we plan on the later part of the day being awesome. Then we are going to write up a story for the morning that is super convoluted with forced dialogue, overly self-referential nods to what will happen in the afternoon and this jerk: 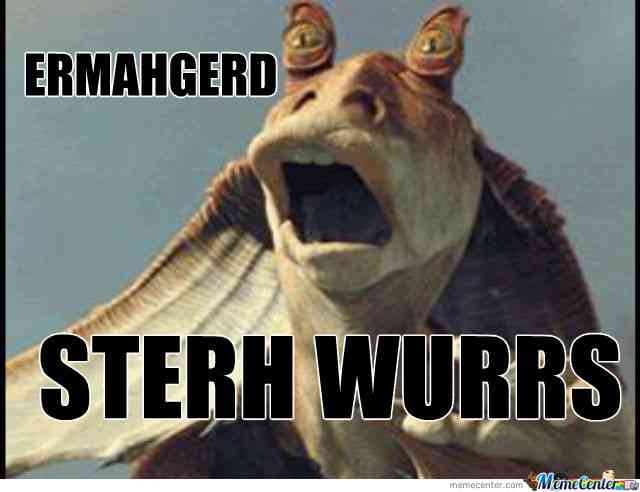 So Nickie made these shirts for us all to wear today. You guys have probably already seen it as the thumbnail for these posts, but here is a closer look:

Including…duh duh duh…our next door neighbors, the Changons!! Yeah…George, Stephanie, Courtney and Emily will be meeting us after breakfast today and spending the day with us…YAYYY!

Ok..so let’s back up. We will wake up. Hopefully. Then we will take an early bus to Hollywood Studios. We have an 8AM breakfast at Hollywood and Vine. The food here always gets some mixed reviews but I have always enjoyed it. Standard stuff but I mean there is biscuits and gravy and Mickey waffles. So I’m all set.

AND there are characters – it’s a Disney Junior theme so we have Sofia the First, Doc McStuffins, Handy Manny and Jake. This works out well because the boys LOVE Sofia the First. ..

Also…before breakfast we have heard that you can actually sign your kids up for Jedi Training: Trials of the Temple. Which makes things much easier…if it’s true. On account of not having to rush over and wait in line to just get them signed up. Jedi Training is pretty cool as the kids may get to fight  either Darth Vader or the Seventh Sister (whom they have never seen here before…)

After breakfast, a bunch of us are going to rush over to Rock N’ Roller Coaster and try to get right on without a fastpass. Owen is FINALLY tall enough to ride this so he is super psyched. And if we can after this ride, we may jump on Tower of Terror as well (my favorite ride in all of WDW.) But if not, no big as we have fastpasses for it later. We also have a smattering of FPs throughout as some people will be doing different stuff. We have some Toy Story Mania, Disney Junior Live, Star Tours, Indiana Jones and Frozen Sing-A-Longs. Yeah, ALLLLLL over the place. And we definitely want to check out Star Wars Launch Bay to meet best ever Chewbacca. He really is best ever.

They have also added new Star Wars elements to this park in the Galaxy Far Far Away show and the march of Captain Phasma through the park. Super excited to see those!!! Ugh sorry. Three exclamation points. I just nerded out there.

Speaking of nerds. By the time lunch rolls around, we will have to say goodbye to the Nerdys. Which sucks. I am sure by now they will have gotten sick of us, but I doubt we will have an easy time letting them go. Bah. The good news is that Matt has a really hard time leaving places so he potentially may stick around…even whilst those around him get more and more angry because they might miss their flight out of Vegas….

Sorry, story for another time. Anyways, we will miss you Nerdys…but I am sure we will have made some pretty awesome memories.

We then have a lunch reservation at Sci-Fi Dine-In Theater. If you haven’ eaten here before…it’s pretty cool. It is designed to make you feel like you are at a drive-in movie theater under the stars. You eat in cars and there is a movie screen that loops old clips and B-movie trailers.

To eat, I think Nickie and I are gonna split the appetizer sampler (wings, onion rings and fried pickles with dipping sauces.) And for my entree, I am going to have to see what the specialty burger is this time around. Last time I was there I had a burger with a hot dog on top of it. So. I bet Nickie gets the Reuben….but can’t be too sure. The kids will most likely get burgers as well.

The shakes are also hella-good here. So I sometimes get that in lieu of a dessert…though they also have peanut butter chocolate cake. Droooool. So who knows. Or maybe I will save my appetite and pick one of these up on my way out….

After lunch, we will grab a bus and go back to the resort for some relaxing by the pool time. And then we will get dressed and ready for…

DINNER AT THE YACHTSMAN STEAKHOUSE!!!!!

This is my favorite restaurant in all of Disney so I am super excited for it. Cuz meat.

ANNNND….my brother Scott will be coming in from Chicago by this time to join us for dinner. He’s literally coming for pretty much just this. It’s sort of like my birthday dinner…so I’m really happy he can make it.

Before the Yachtsman, I hope to stop by the Crew Cup lounge next door for a drink…Highly recommend this place! Always been empty whenever we have been there. Comfy chairs, snack mix and good drinks. Good palette cleanser. Before all the beef.

OK…so the Yachtsman. Located at the Yacht Club, this place is seriously bomb. To start, I am gonna get the charcuterie board. This thing has Iberica de Bellota, bison sausage, saucisson en brioche and rabbit. I don’t even know what half those things are but I am still goin to put them in my belly.

For dessert, I will most likely get the Chocolate-Peanut cake. Nickie…herm…not sure. The kids though…the kids love the dessert here. It’s this white chocolate Mickey puzzle that they can paint and then eat.

After dinner, we are going to take a nice walk back to Hollywood Studios so we can watch the Symphony in the Stars Star Wars fireworks. OMG I am so excited for these. Sort of feels special to see these because they are going away soon to make room for the more permanent Star Wars night show. This is literally a perfect end to this day.

So yeah, some hellos, some goodbyes unfortunately….but overall, should be a really fun day.

OTHER GETTING READY FOR DISNEY POSTS: