OK so yeah. I know the plan was for real-time updates from the trip. But this just became too tough as our nights became later and later towards the end of the trip. So now? Fake-time updates. I hope this is ok. You aren’t paying me to write these, so I figure I have a LOT of freedom here. 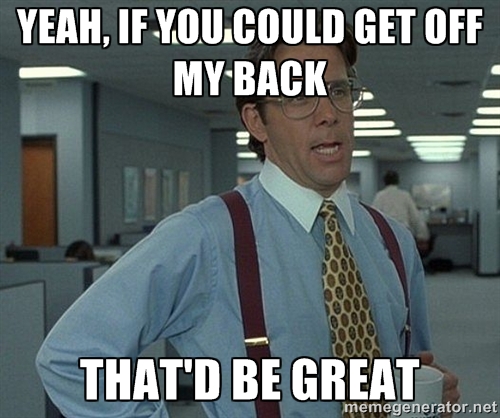 Also though…there was a little family drama that ended up transpiring starting around now so I debated actually writing these but people have contacted me and told me they want to hear about the rest of the trip. So I am just going to say that sometimes with a big group of people like this, drama happens right? I won’t go into the details or anything…but I will say the trip was still an overall success. And so many others have reached out to me telling me how much fun they had…so I want to continue to document it. I will just gloss over the not so magical parts. Deal?

Anyways –Day 7! The bad news was Shannon had to travel back to take her nursing exam so she couldn’t be there for this day. However, the good news is she passed her tests so YAY for her. And yay for school.

So Day 7 was like sort of kind of official ME day. Which is obviously my favorite kind of day. This was the day we were all going to wear our T-shirts that Nickie made us…You know…these…

And we were heading to Hollywood Studios for the day!!!! First stop was Play N’ Dine at Hollywood and Vine. Well, first stop was getting the kids signed up for Trials of the Temple (formerly Jedi Training). Super easy if you are doing an early breakfast – they take you right over to sign up. Much easier than it used to be.

Then it was Play N’ Dine time! This is where you get to have a buffet breakfast while dining with Disney Junior characters – Doc McStuffins, Handy Manny, Jake and Sofia the First. My plate was pretty epic here. On account of I ate ALL the food.

And while my kids and the Nerdy boys pretended to not care about meeting these guys, Mia and Connor were PSYCHED. Which was awesome. 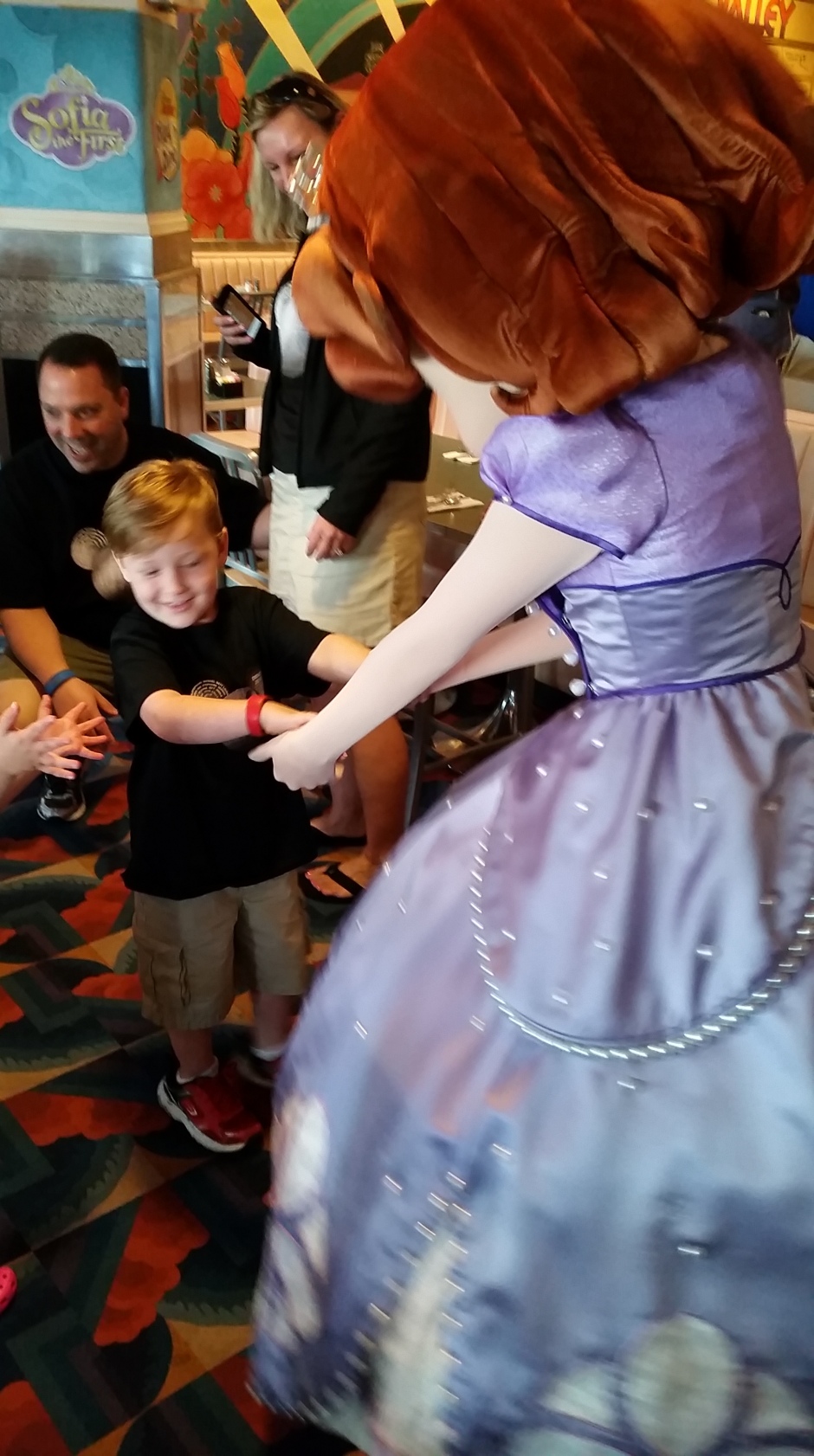 After breakfast, Matt, Stephanie, Mikey, Tony, Jeff, Evin, Owen and I crowded with the masses until 9:00 and then booked it down to Rock N’ Roller Coaster – Owen’s first time riding this. He is finally tall enough. He was soooo essited for this. And he LOVED it. See?

After that, we had fastpasses set for Star Tours, but Jeff and Evin did not so we walked over and saw that the standby line was only 10 minutes so I texted Jeff for him and Evin to come ride it with us. They came over, we rode it and then used our fastpass to ride it again. At this point, we also met up with our neighbors Stephanie, George, Emily and Courtney (the Chagnons)! Yay, more people I love.

We got Jakku twice and also visited Naboo and the Death Star. A pretty good set of missions. And both Will and Jack were the rebel spies….those scum.

After that, the boys decided that they didn’t want to do Trials of the Temple any more. I think Myles felt a little too old for it and Owen really wanted to make a double-sided light saber. While in line, we heard a mom talking to her son about how she couldn’t get him signed up for Trials and we turned around and gave Owen’s ticket to her. She said this was a miracle and ran over to get her kid robed-up. Good deeds. Yay.

Then Owen and Emily made lightsabers (Myles had already made his Kylo Ren one in Disney Springs). 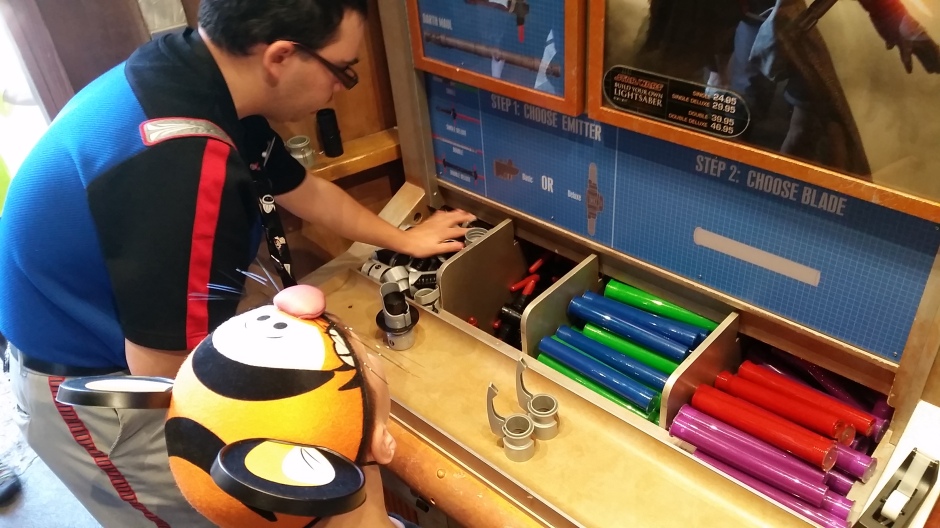 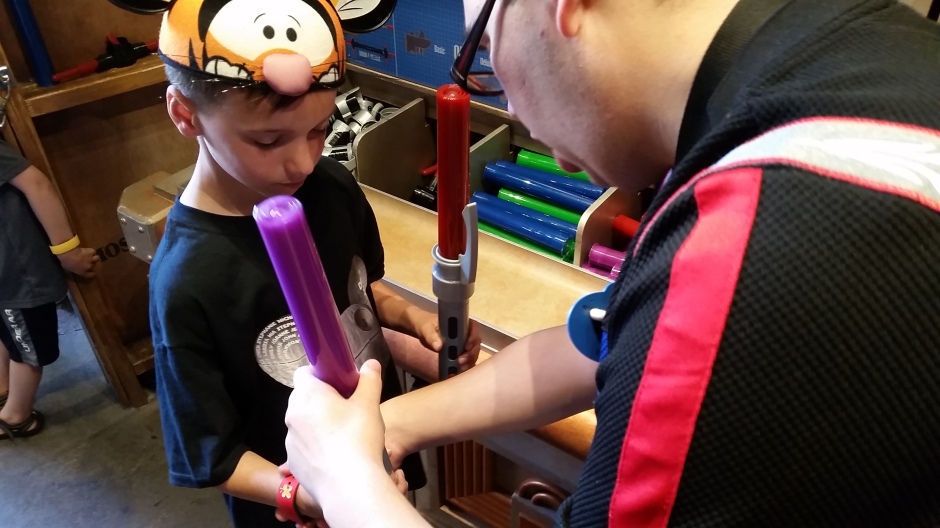 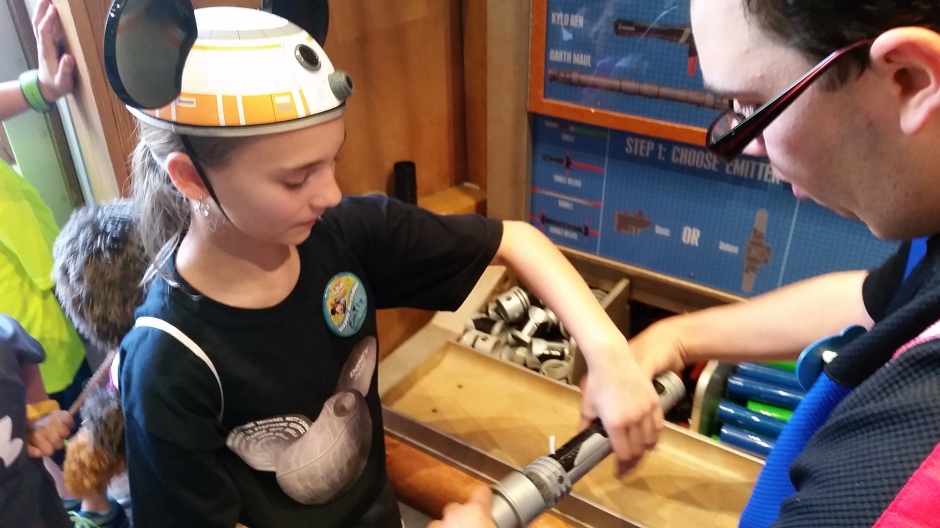 After that, we went to watch Connor do Trials of the Temple. While our boys weren’t doing it, we still wanted to go support Connor while he fought the Dark Side.

Then we went and rode Toy Story Mania…I got the high score NBD.

At this point, we had to say our first set of goodbyes. To the Nerdlers. Womp. We had SUCH a fun time with them so it was not fun seeing it come to an end. But we made such good memories with all of them. I am so glad they came. Even if Matt made fun of me a lot.

Then, after that, we checked out Star Wars Launch Bay to meet Chewbacca and hopefully Kylo Ren (if there was time before lunch). Well, while we were in line, the mom we gave Owen’s Trial of the Temple ticket to was in front of us. She said her son loved it and told us that she would go save us a place in line to meet Kylo Ren after we saw Chewbacca. Karma, man. They were both great but Chewy…man. He was awesome. Though he didn’t like my “Han Solo Frozen in Carbonite” popcorn bucket all that much. 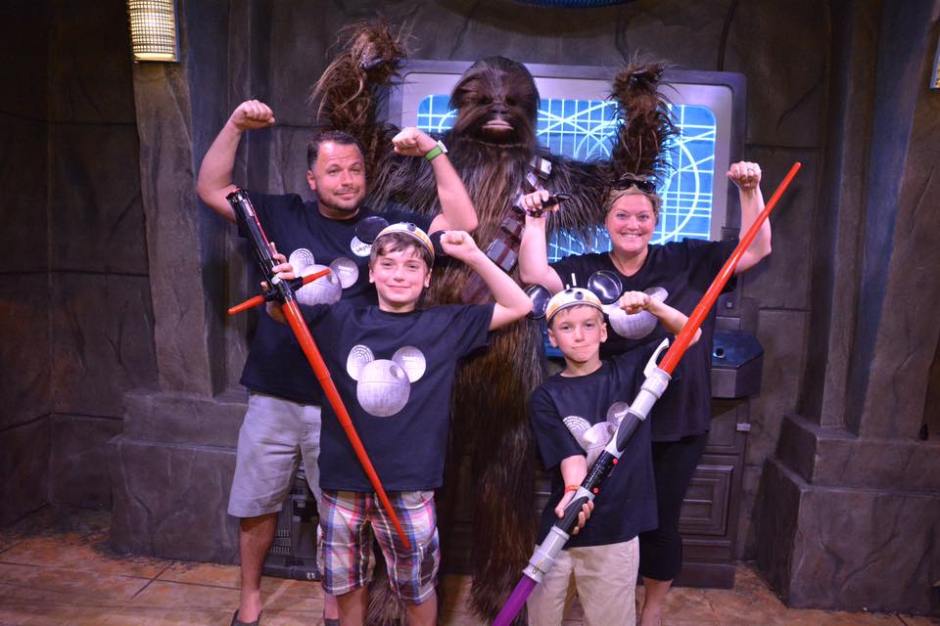 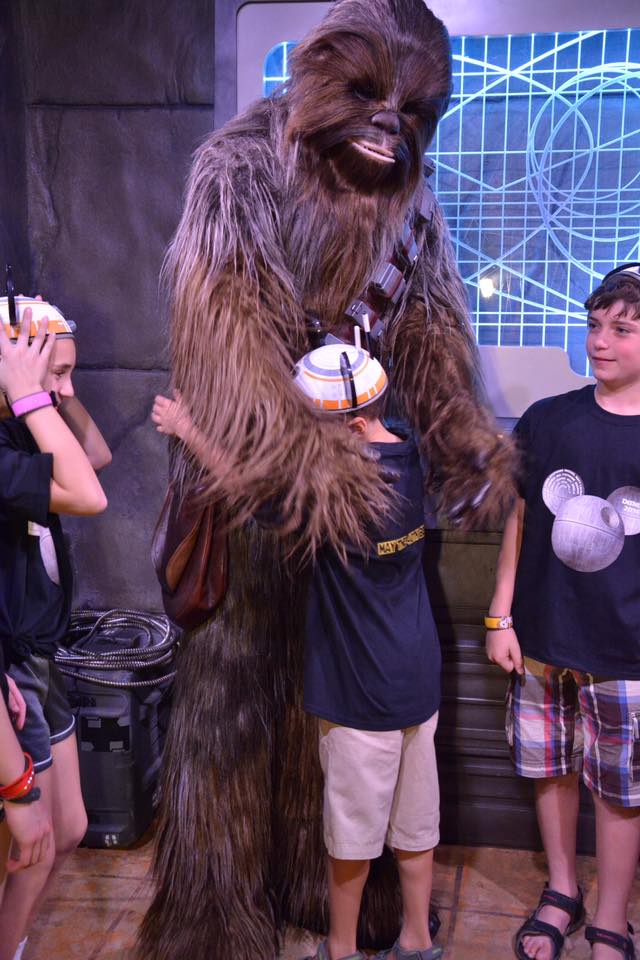 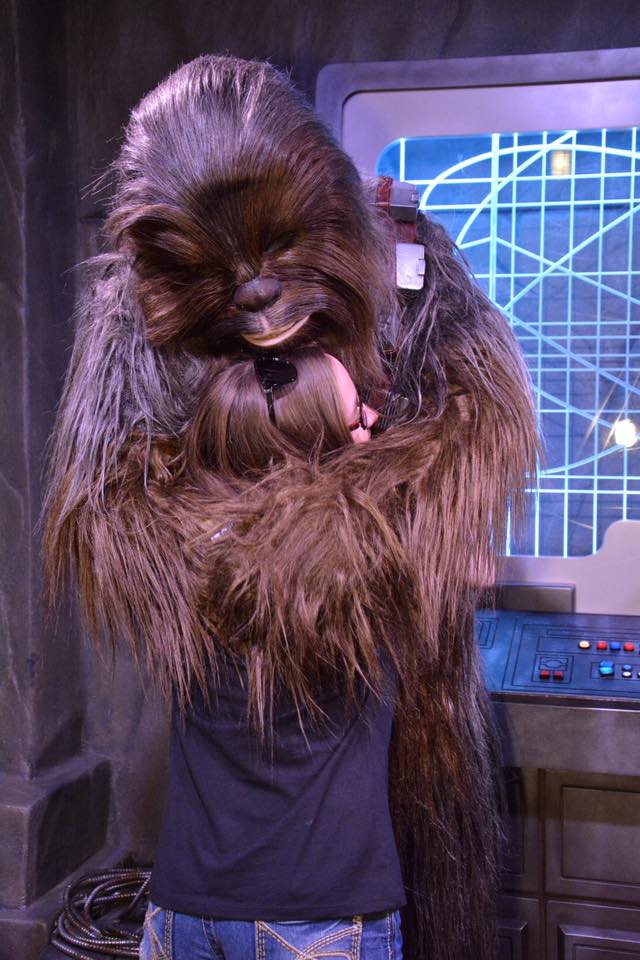 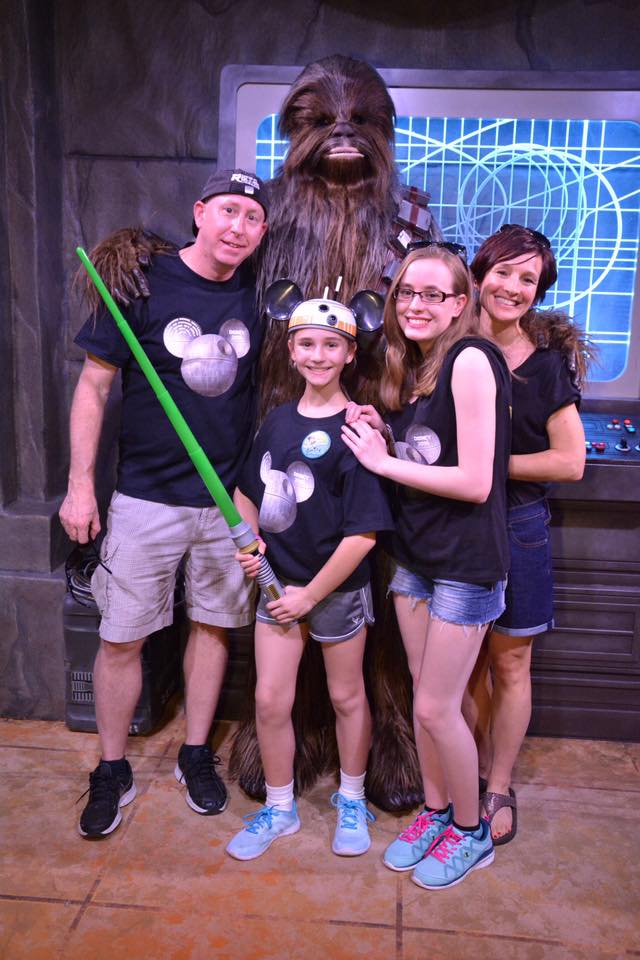 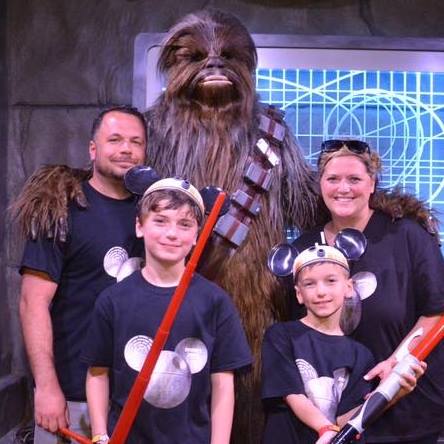 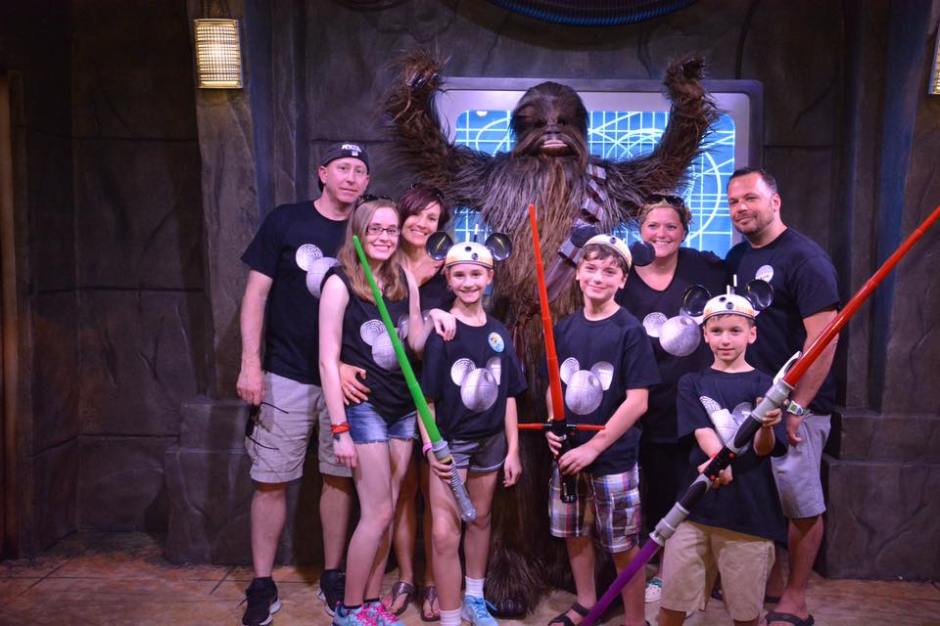 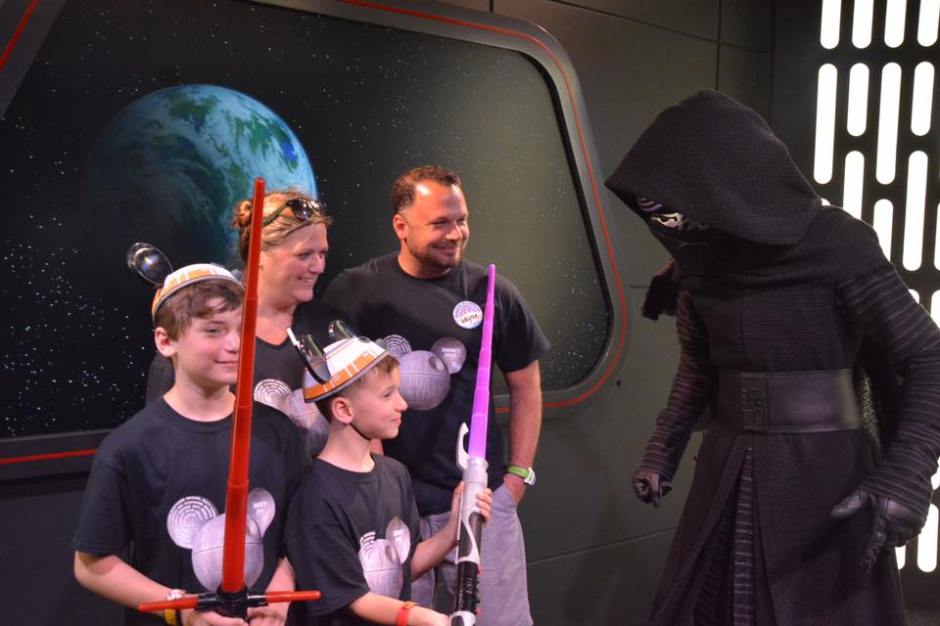 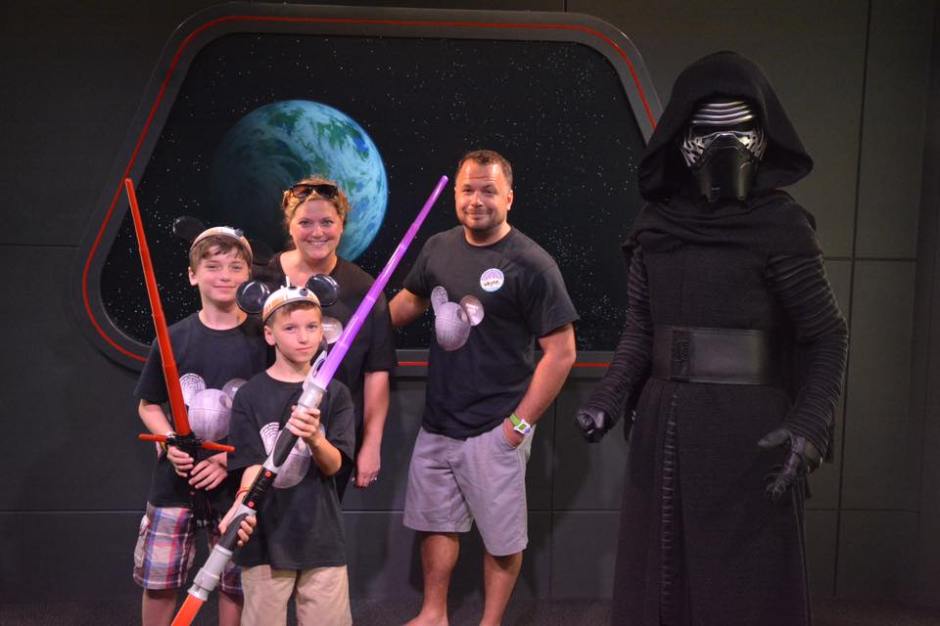 Then Nickie, Steph, Mikey, the boys, my mom and I had lunch at Sci-Fi. For those that don’t know, Sci-Fi is designed like a 50’s drive-in where you sit in cars and they play old clips up on the screen.

I had the onion rings and reuben and honestly cannot remember what everyone else had. We were insanely stuffed so I do know we all ate like half our lunch. But it was delicious.

After lunch, we headed back to the hotel. Nickie and the boys went down to the pool while I waited for my brother Scott to arrive. He was only coming for the night, but wanted to be there for my “birthday” dinner….

Scott arrived, we got him set up in our room and then headed down to the pool. Jeff and Steph were down there as well so we all got to hang out for a little. Then we had to go get ready for dinner. AT THE YACHTSMAN. YES! For dinner, we had the four of us, Scott, my mom, Steph, Mikey and the Falzones. And dinner? It was amazing of course. Lots of steak, some lobster, tons of cheese and charcuterie. Oh and martinis and wine of course. 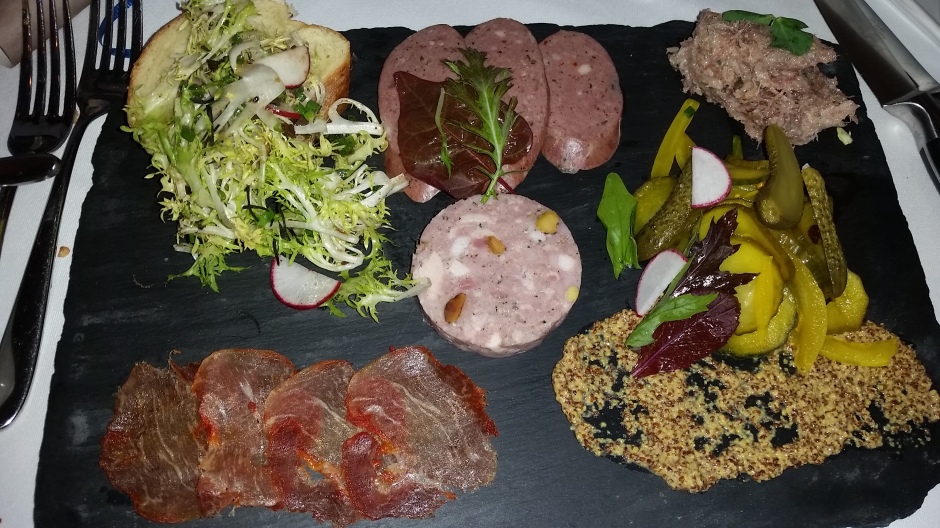 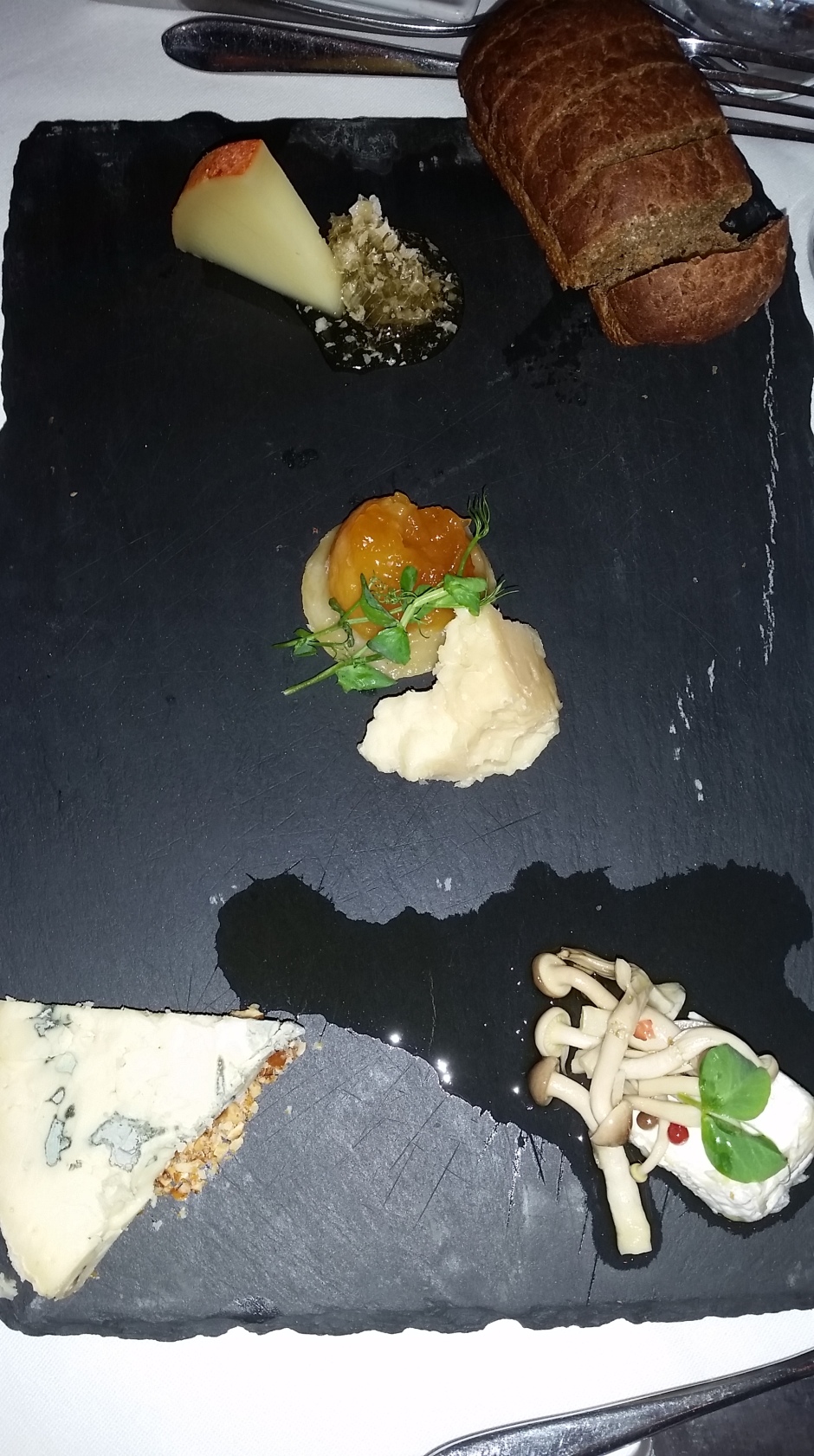 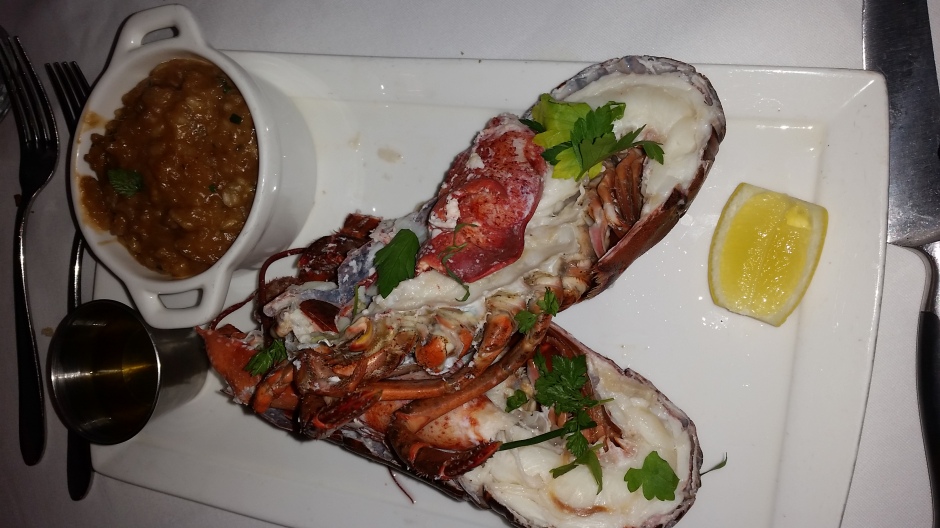 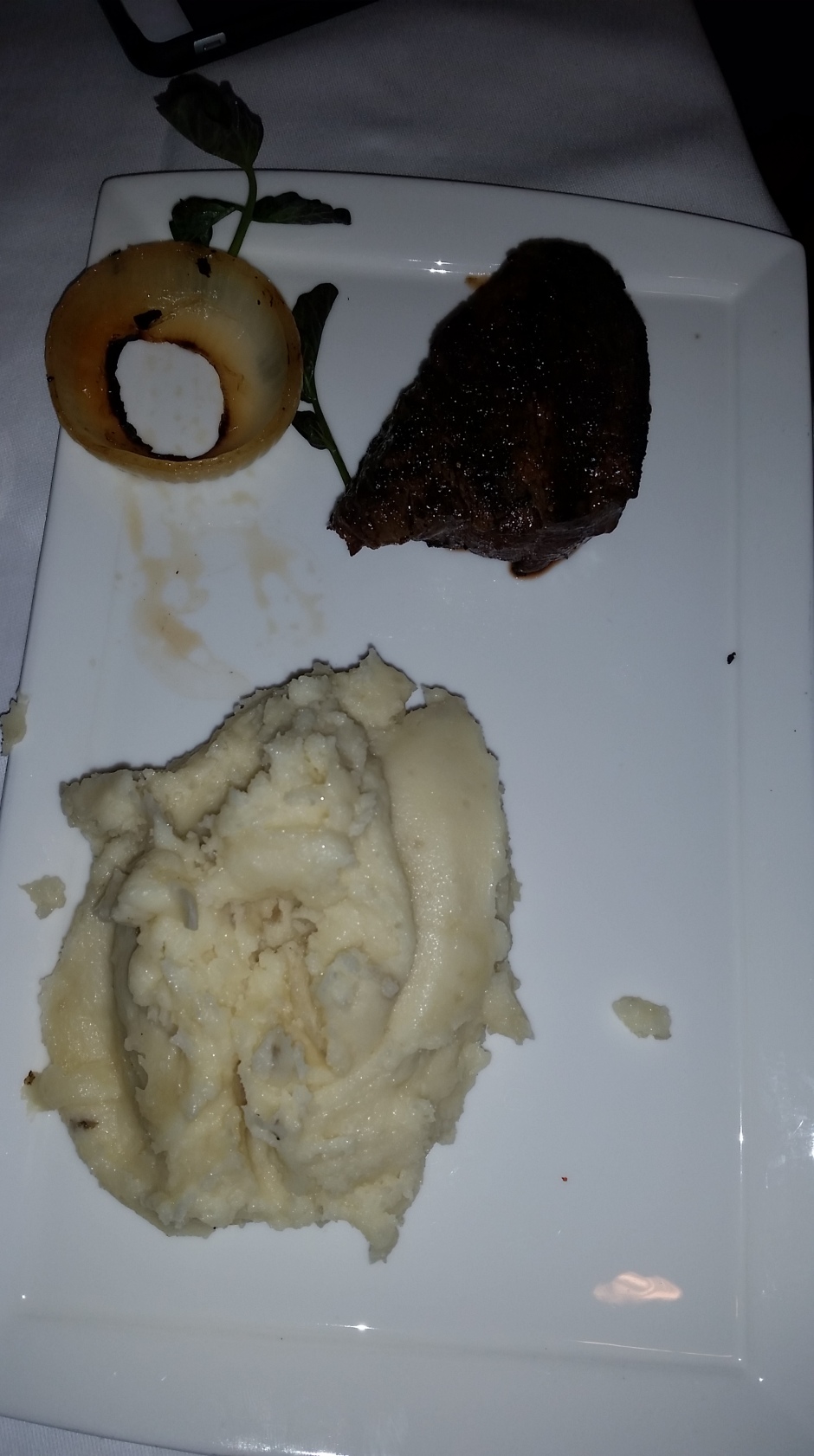 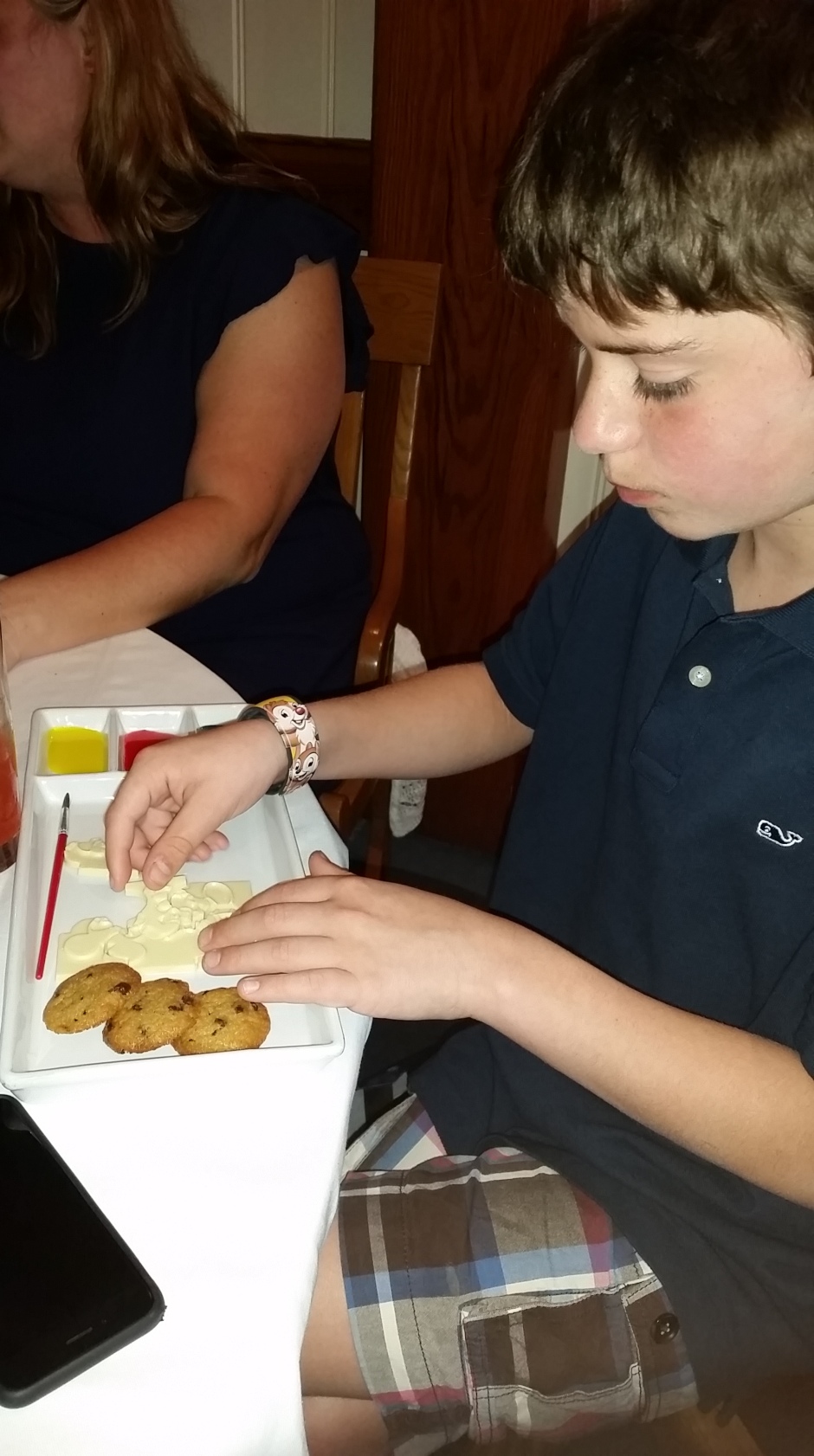 And at dinner, Steph…oh man, Steph. Steph got up and read a toast she had prepared. It was pretty amazing. She prepared this whole thing and got up in front of everyone and talked about how she loved me and how special our relationship is and how we are not only uncle/niece but also best friends. Needless to say, I cried. Obviously. It was so good in fact, that after dinner the guy at the table next to us came up to me and said, “you must be a really great uncle” because of her speech. I heart her. Srsly.

After dinner, we wanted to get over to Hollywood Studios quick for the Star Wars: Symphony in the Sky fireworks and we met up with the Chagnons over there as well. Man, these fireworks were amazeface. Seriously…chills. I love all Disney fireworks and Illuminations has always been a favorite but I think these have become a new favorite. I am glad we got to see them because I think they are changing them out soon.

After the fireworks, my mom (being the amazing person she is) took the kids for the night so we could have a night out. We hugged my mom and our boys and headed over to the boardwalk. The plan for the night? Karaoke. We went over to Kimono’s at the Swan and met Scott (he hung out while we watched the fireworks), Jeff, John and Evin. And we had SO. MUCH. FUN. I am legit obsessed with karaoke. Sang some Sir Mix-A-Lot, Backstreet Boys, Kid Rock and Sheryl Crow, Johnny Cash…and of course Prince. And of course “Purple Rain.”  Love me some Prince and was def saddened to hear he passed. Purple Rain was actually a song that someone (Steve, specifically) chose for the “soundtrack of my life” book Nickie made for me as a song that reminded me of them. So yeah….sad face.

Here are some pics from the night. There is video as well, but I made a lot of promises to keep those out of the public eye. 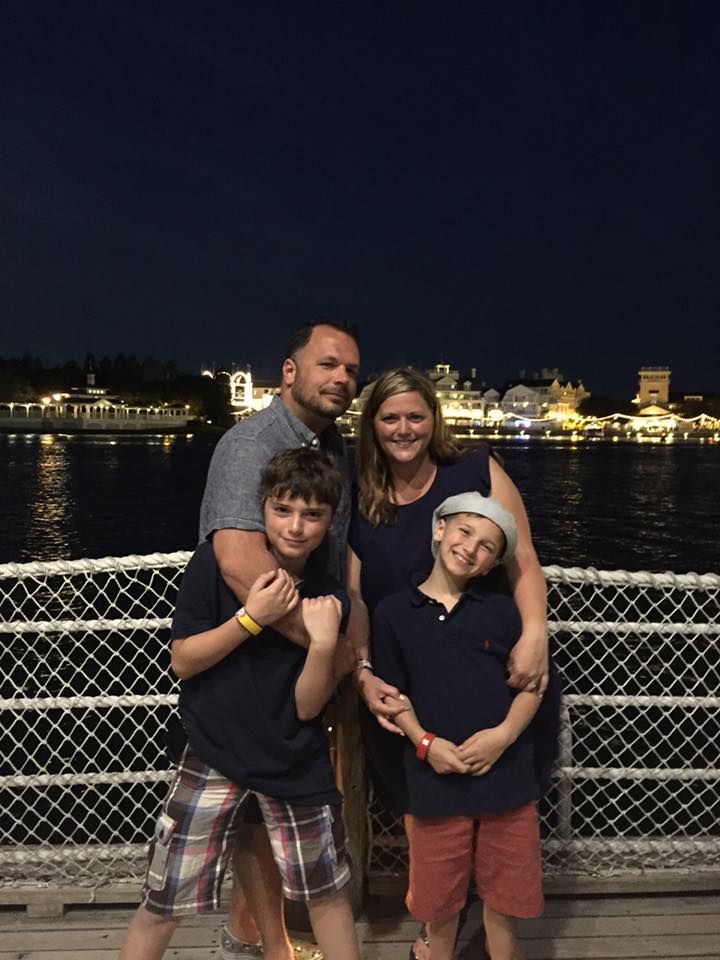 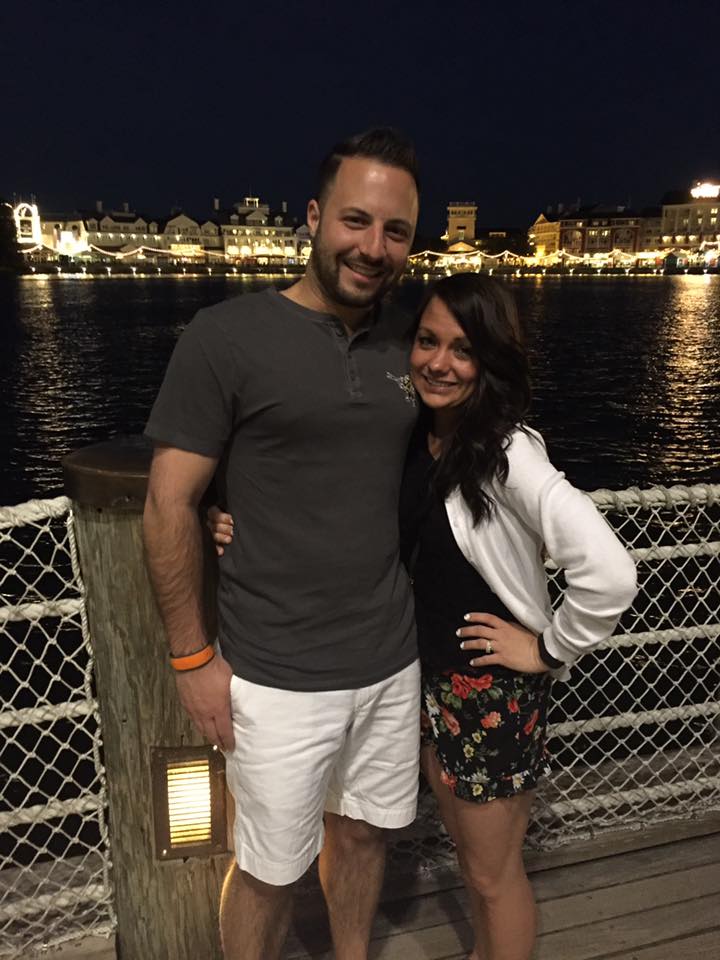 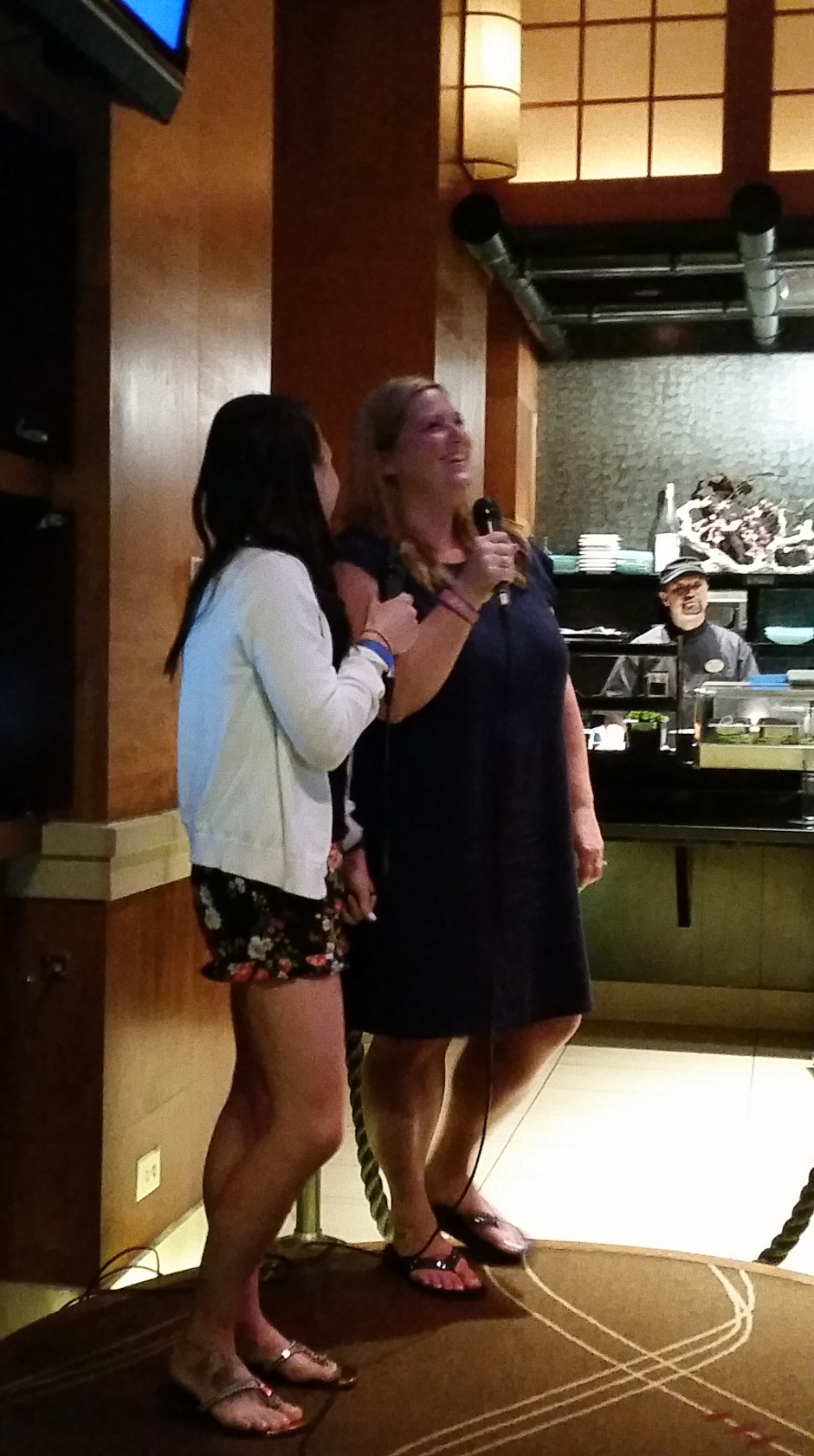 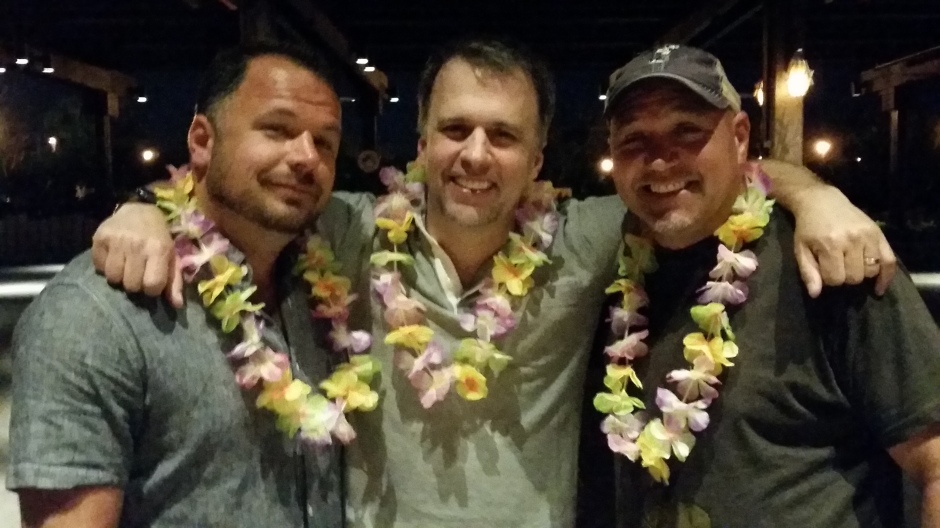 Overall, great great night though. Definitely appreciated everyone that celebrated with me and especially Scott who made the trip down from Chicago. I really do have some of the best people in the world in my life. Have I mentioned that I am lucky. Cuz I am.