And now we come to Day 8. Day 8 was our second EPCOT day (though a first EPCOT day for everyone else.) Also, I would like to take this moment to remind everyone that Day 7 was a LATE night. We didn’t get to bed until between 1:00 and 2:00 AM I think. AND we had to get up at 6:00AM for today’s breakfast. Please note this and take a moment to reflect on how amazing we are.

OK, also…Scott stayed in our room that night and had to get up today to catch an early flight. I woke up before everyone and ran out to get some coffee for us all. And then we had to say goodbye to Scott. Again, a super short time with him (too short!) but we had so much fun! I really am glad he came, even if it was for such a short time.

So after big hugs and stuff, we walked over to the TTC and headed off to EPCOT – Nickie, Steph, Mikey, Tony, Larissa, Mia and I. Remember, no kids at this point….we were meeting them and my mom at EPCOT. One last chance for debauchery. But eh, nothing.

We got to EPCOT and gave the boys (and my mom) big hugs. And ugh…Owen bought us presents.  He bought me and Nickie mugs with the money we gave him to buy something at the gift shop at the Wilderness Lodge (where my mom was staying). They say “Mom” and “Dad” on the handles and have all kinds of Disney World imagery all over them. Seriously. Tears.

SO at EPCOT we had a nice pre-park-opening breakfast scheduled at Akershus. Not only do we get to have a great family-style breakfast AND get into the park before opening, but I also get to see Belle…..Erm…I mean, the kids also get to see the princesses. Yes, covered that up nicely. But seriously, I do love this breakfast. Not to mention that Mia LOVED them. 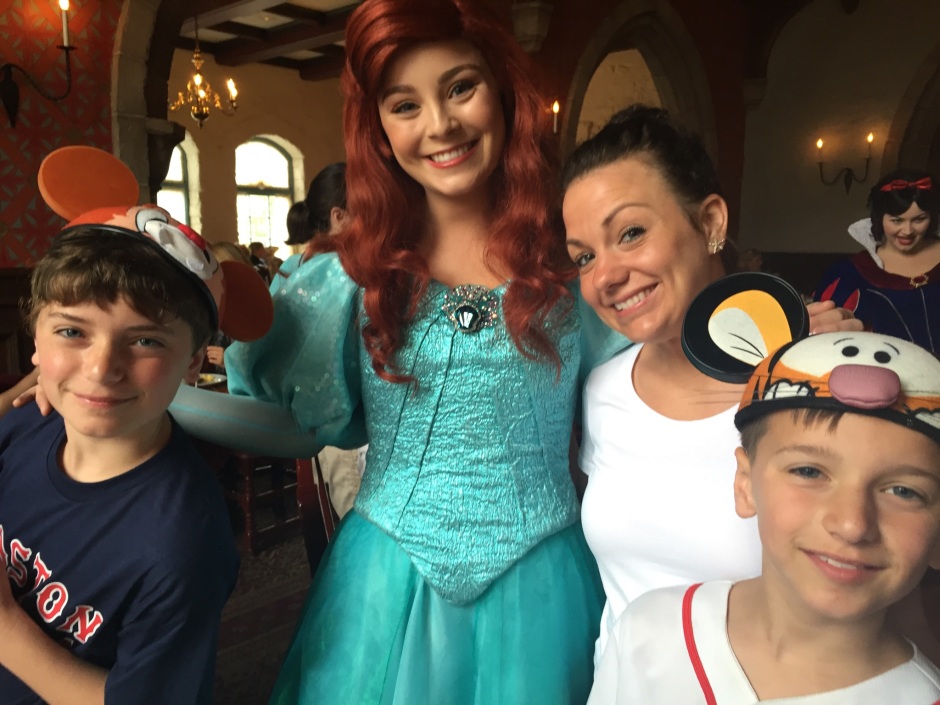 After breakfast, it was right to Test Track. We met the Chagnons there and then rode it. WITH MY MOM. I gotta hand it to her, she handled it nicely. Only one swear the whole ride. And at the end of the ride, after saying she was going to be sick, she commented, “that wasn’t that bad.” So.

Then, we took a walk over to Journey Into Imagination, but on the way we went through the butterfly garden. And I don’t know whenever, I say “butterfly,” I legit say it like Bambi. EVERY. TIME.

So we spent a little time with Figment and then I really wanted to see that new Pixar short thing where Captain EO used to be.  But some people saw Mary Poppins and Belle hanging out so they decided to get some pics taken.

And eh, it was all for nothing anyways because the next Pixar show was in like 20 minutes and I mean…I have already seen all these so.

But then we had some more decisions to make. The World Showcase opened at 11AM and we had a fastpass for Nemo at 11:15. We also had lunch at around 1:00. Which would mean if we did the Nemo pass AND wanted to head back to the Poly after lunch, we would have at best like an hour, maybe an hour 15 in the countries. AND George had already made it clear that touring the countries….and by “touring” I mean “drinking”…was something he really was looking forward to. Myles was also very much looking forward to eating around the countries as well. Before lunch. Ugh, Disney. So we had to move on to the World Showcase and bypass Nemo.

We waited outside Journey for Jeff and his fam squad to get off so we could tell them though…since they were potentially riding it with us. We waited, let them know and then Nickie, the boys, Steph, Mikey, George and I went off to Mexico to start. Well we actually made one stop for one of these beforehand:

THEN it was off to Mexico. Myles and Owen picked up some Duffy Kidcot thingamajigs so they could have the cast members sign them at each country. Then, Nickie took the boys on the Gran Fiesta Tour while the rest of us hit the Cava del Tequila. Mikey and Steph opted for a classic margarita while George and I got the avocado (one each):

Myles was gonna get a churro, but the line was long and he was already getting one at dinner later so he kept on moving to Norway. Nickie and Owen hung back in Mexico because Owen needed a little rest. We got some Carlsbergs and school bread:

Downed that quick. Like, real quick. And it was then we went to China. We were determined to squeeze as much as possible into our small pre-lunch window. So we got two Tipsy Ducks in Love to split. And of course some egg rolls. And Nickie and Owen met up with us again.

At this point, due to the rapidity with which we were imbibing, I was already feeling it. But we pressed on to Germany (I mean, the Outpost is ok…but we had stuff to do.) In Germany, Mikey and Steph got a grapefruit beer and George bought him and I a Jaeger shot. We saw this as the best call since we had to get things done quickly. Shots made the most sense. Don’t they always?

And Mikey got a pretzel for us to share as well.

So, I mean, this happened…

And then came Italy. I went all class and got a Prosecco. On account of it seemed the quickest thing to get and also shhhhh….I actually like Prosecco.

After Italy, came Americuh. So of course we got the Red Stag lemonade. Doy. And Owen got a funnel cake. He had literally been asking for fried dough for like 2 days straight and finally…he got his wish.

We also paused here for a bit to enjoy the acapella group on stage. We were obvs dancing. Like, a lot. They sang the Black Eyed Peas so I mean…hurr durr. Also, Mikey? LOVES a capella. Pitch Perfect is like probably in his top ten movies of all-time. The other 9? Well I think 8 of them are Fast and the Furious movies. And then I think Arthur. Yeah, Mikey.

Then it was getting very close to lunch so we had to start making our way over to the UK. Thank goodness they have alcohol at the Rose and Crown. Black and Tans baby.

And then it was lunch time. For apps, I got the scotch egg and convinced Mikey to do the same. I also got the bangers and mash for lunch. And erm…I really don’t remember what everyone else ate. On account of prior activities. But we definitely got one of these for dessert.

As always, lunch at the Rose and Crown was awesome but we needed to get back to the hotel. Or we would never see dinner. So no more drinking….OK, wait, one more drink. Ohai France.

We went back to the hotel, took a very quick dip in the pool and got ready for dinner. We then met up with the Falzones at the resort (as well as Steph and Mikey of course) and headed back to EPCOT.

While we were on the monorail, it started pouring. So when we got to the entrance we made the decision to jump on Spaceship Earth to wait out the storm. No wait, got right on. And when we got out? Rain had slowed down dramatically.

So we walked over to La Hacienda and met the Florida Goodys and my mom. So I gotta be honest. I love La Hacienda. The empanadas. The taquiza. But I was FEELING the day. Hardcore. So I had a tough time getting it all down. Oh, I also had another avocado marg. Yeah, I don’t understand me either.

Before dinner, Owen said he wanted to make a toast. This kid. So, I guess he told Steph that morning that he wanted to say something about me at dinner like she did the night before. And they worked on their toast all day when I wasn’t looking. I know this is a shock, but I was crying. He said SUCH nice things and even made some musical references. He’s awesome.

AND they sat us right by the window. Which meant we had an AWESOME seat for Illumniations. This was our view.

Ah. May. Zing. I know. After dinner, we hit Mouseworks for some souvenirs and then took this:

Another super duper day for sure but it ended with a few goodbyes. We had to say goodbye to Steph, Mikey AND my mom tonight. Ugh. Sucktown. But again, the memories we all made on this trip will be something we can look back on for years to come.