Oh this? It’s just the last post in our WATCHING OUR WAY ACROSS AMERICA series. Pfft, what? It’s no big deal. I mean. They’re just posts. It’s not like I even care all that much about them.

I’ll just get this one written and then, eh…its just another day.

Just another stepping stone in life’s…

OK Wayne. Pull it together. You can get through this.

And while the rest of the movies have had really no rhyme or reason to their order other than simply being in Owen’s top ten, this movie IS his number one movie. So we thought it made sense to save this one until the end. This kid loves Pooh. Always has. Legit ten years of non-stop Pooh. Pooh on his bed. Pooh all over his clothes. Kid eats, sleeps and breathes Pooh. When I think Owen, I think Pooh.

I know Owen is going to get into his reasons for loving The Many Adventures of Winnie the Pooh at the end here but I have to say Pooh Bear always ALWAYS will have a special place in the Goodreau house. Not only is he Owen’s favorite (seriously, the kid has at least twenty stuffed Winnie The Poohs) but at least since we have been together, he has been one of Nickie’s favorites too. I remember drawing pictures of Winnie for her when we were dating. And Myles has always always loved Tigger. I don’t think the image of him as a young boy jumping around with Tigger at Crystal Palace will ever leave my brain. So for me, Winnie The Pooh associates strongly with like three of my favorite people. And I mean, Eeyore is like in my top 2 Disney characters. So really four favorite people. Natch.

The Hundred Acre Wood is alive and well in the Goody house.

And I have said it before, but this movie (and so many other Disney movies) mean so much to me and my family. Watching movies like this is such a personal experience for us. I mean, we like it just because it’s a really good movie full of wonderful stories and characters, sure. But it’s so much more than that to us.

I have talked about this countless times but eh…its my blog. So I am gonna do it again. I know some think it silly for people to love something like Disney as much as we do. But because we have loved Disney for so long and let it into every corner of our lives, it now echoes so much for us. And having that has enabled us to always go back to cherished memories and times in our life with really no effort at all. We can listen to Disney music or watch a Disney film and instantly be transported back to something we all shared.

So when we watch these movies, we enjoy them all on their surface but they can also send us back to so much that has seemingly gone by in an instant. I know as we make memories on this road trip over the next few weeks, they will live alongside so much Disney. The music we listen to in the car. Our first visit to Disneyland. The spots along Route 66 that inspired Cars.  It’s fitting that this leads into the start of this epic road trip. Disney has created so many guideposts for us that enable us to find our way to those memories as time marches on and covers our tracks.

Call us Disney freaks or obsessed or whatever, but I think we are pretty lucky to have found something all four of us enjoy and can share together.

But eh, I am pretty glad it did. Now, on with the post.

Bah, I almost don’t want to write about this. For one, it’s the end of the trip. Which I mean. Ugh, right? But for second, I really don’t know what to say since this whole day is relatively up in the air. As I noted in my last post, this is Owen’s day so he gets to pick whatever we do for the day.

So I assuming we will eat lunch….somewhere. And we will do….something. Ep. Ic.

And then after that? We will head back to the hotel, grab our stuff and call an Uber for the airport. We are taking a red-eye back that night, arriving back home the next morning. I am sure we will be sad. And tired. But hey, at least we get to see Daisy.

And like I have been saying, I am sure we will walk away from this trip with some insane memories. Once in a lifetime trip here and I know we will never forget this one. Nickie and I have said to each other that we know it’s not always going to be perfect or go according to plan. But if, at the end, we can all legitimately say we had a good time, then it will all be worth it. Nickie and I STILL talk about our cross-country trip 14 years ago. And not every day was perfect then either. But it’s us making it through the bumps in the road as well as enjoying the good times that make us the family we are. Because through it all, we are in this thing together.

So for this theme night, it was another weeknight (two days before the trip!!!!) and it was just the four of us. We obviously decorated the house. Pooh everywhere. All that was missing was a “Mr. Sanders” sign.

For the activity, we did a couple things. Well, we did one thing and I am planning on doing another. As you can see, we had a picnic on the living room floor. That does TOO count as an activity.

And for bedtime tonight, I am going to read from our Winnie-The-Pooh storybook. The kids and I have read through this thing multiple times already but they are pretty great stories.

Obviously, everything was HUNNY-based. We had Teddy Grahams again…..this time, honey type.

And for our entrée, we had honey-barbecue chicken, honey-glazed carrots and Grands Honey Butter biscuits.

As always, here is my take on The Many Adventures of Winnie-The-Pooh.

But we all came here for some Owen. Sooooooooo take it away Owen….

I love The Many Adventures of Winnie the Pooh for many reasons. For one, I love the story of Pooh Bear and all his friends. Winnie the Pooh is my favorite character in all of Disney. He’s funny and caring and sweet. I like the part in the movie when Pooh is trying to get the honey and he pretends he’s a rain cloud. I like that part because he thinks he will trick the bees and then he gets chased by bees. I also like the part when they are celebrating Pooh and Piglet at the hero party because Pooh saved Piglet and Piglet gave Owl his house.

Take it back, Daddy…

And that’s it for our MOVIES ACROSS AMERICA project. It’s been fun…and different. Being able to combine Disney with non-Disney movies and introduce Nickie and the boys to some movies they haven’t seen before (or haven’t seen for a long time) has been a really cool experience.

Now onto the trip. I really hope you will follow along as we make our way to Disneyland.

Adventure is out there! #GoodReaudTrip 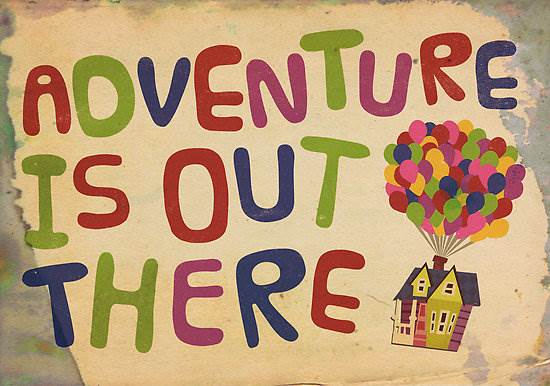