And we have come to Day 10.  Can you believe we are at Day 10 and we still have more vacation to go? That’s kind of an insane thought. I will let you in on a little secret about me and vacations. At about two weeks or so before the trip, I typically already start getting a little bummed the vacation is almost over. I know, it’s kooky dukes. But it’s true. With us, we spend so much time planning and talking about our vacations leading up to the actual trip, that sort of becomes part of the whole thing. And so, in relation to the full time we spend planning and what not, by the time the trip happens its almost all over.

Yeah, I know. But it’s the way it is. However, with this trip being so much longer than our typical Disney trip, I feel like I won’t be feeling that way as much. So all I am saying is this trip is an enabler. Huzzah.

Day 10 – Brunch in the morning, Christmas at night

The plan, according to the spreadsheet, is for Nickie and I to wake up and go exercise a bit before getting the kids up. Since today isn’t technically a “park day,” we can wake up at 7ish or so and head down to the Boardwalk for a run. The Boardwalk early in the morning is one of my favorite places to run in all of Disney. I usually do a few laps and add in a run to and from Hollywood Studios.

To be honest, I hope to get more runs in throughout the trip but we shall see. We. Shall. See. But today, for sure, we need to get a run in. Because I plan on eating ALL. THE. FOOD.

First though. We have to get the kids.

Yeah, we have to get the kids.

So we will wake them up after our run and we will all get changed. Probably kind of fancy-like. Because we have a fancy-like brunch planned. At the California Grill!. We are INSANELY excited about this brunch. Like, this excited…

It. Looks. Amazing. That review spells it out in detail. But it’s got like all the best things. It’s a buffet. And you can get plated entrees. It’s got bottomless mimosas included. And there is a Bloody Mary bar (that counts as my alcoholic drink on the dining plan.) It’s got sushi. It’s got deviled eggs. It’s got charcuterie. It’s got live musicians playing instrumental Disney music. It’s got steak. It’s got lobster benedict. It’s got pressed pot. And it all takes place in the California Grill – the restaurant with quite possibly the best view in all of Walt Disney World.

It’s an expensive brunch (in fact, prices just went up  to $95/person) so the use of 2 dining credits seems a good use here, especially given the fact I can partake in the Bloody Mary bar. They have shrimp AND bacon available as garnish. And a nice selection of vodkas, hot sauces, etc.

Full credit to the Disney Food Blog for all these pics.

And I mean, the plan is to eat. And drink. I hear they greet you at the elevator with your first Mimosa and then they just sort of keep coming. But yeah, to eat. I plan on taking full advantage of the buffet. The charcuterie looks legit and I have always really liked the sushi at California Grill. And I mean, deviled eggs.

For the entrée, word on the street is that you can get more than one. Which seems excessive.

So I’ll probably do it.

But honestly, even narrowing it down to two would be tough. The lobster benedict, hangar steak, shrimp and grits, and blueberry pancakes are all at the top of the list. So It’s gonna have to be a gametime decision. The steak and lobster benedict might end up being the call. And also a couple bites of the blueberry pancakes I am sure Nickie will get. It will be a glorious day.

There will come a day I will be Cindy Brady. But today is not that day.

I fully expect this to be a multi-hour brunch. I mean, I didn’t even mention dessert, which I hear most people end up taking to go. But there are macarons. Macarons, Jerry. Macarons.

After our what-I-expect-to-be-amazing meal, I hope we take a little time to hang on the observation deck and take it all in before heading back to the resort. I feel like a nap at the pool might be in order.

Dinner is gonna be relatively low-key. Most likely, we will have something in the room – either picking up something at Hurricane Hanna’s, The Marketplace, or ordering some pizza in. I can’t imagine we will be all that hungry after what we all expect will be a disgusting display at lunch. And we have quite a night in store so

Because that night? We are heading to Mickey’s Very Merry Christmas Party! I know, this day is INSANE-town. And I also know that, yes, we said last year we probably wouldn’t do the party this year. But then, as plans started forming we just couldn’t resist.

Although the party starts officially at 7PM, we can get in the park at 4PM. So, I think we are planning on probably getting to the park sometime close to 5PM. I won’t get into every single detail of the party (I will save that for the actual post after we attend) but I will give a quick rundown of what I am looking forward to most:

The parade – Oh, Mickey’s Once Upon a Christmastime Parade. It’s pretty much THE BEST parade at Walt Disney World. Look, I love me some Festival of Fantasy. And we enjoyed the Boo To You Halloween parade. But there is just something about this parade. The music. The snow falling. The smells. Santa. It’s so good. And I am not even a parade guy. Hrm, I feel like I would not enjoy being known as a parade guy. Like, “Oh look there’s Wayne. He is SO into parades.” No one wants to be that guy. But anyways, yeah…the parade. Awesome. 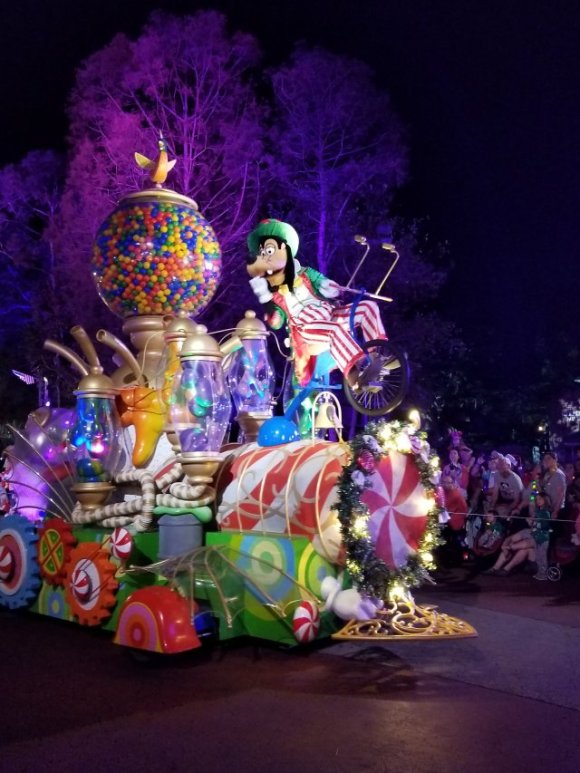 The treats – Honestly, treats at the Christmas party fall into two categories – free and non-free. Though, honestly, by “free” I mean we just paid a ton of money to attend this party and now they are giving me a Santa-shaped cookie. But whatever. It’s all about the optics. And credit to Disney – they have really upped their “free” treat game over the past couple years. No longer is it the same snickerdoodle cookie and cocoa at every Christmas treat stop. Now, they have cookies, snowman-shaped pretzels, sno-cones, cocoa, chocolate, and more cookies. And beyond that, the non-free treats are even great. I am kind of fully expecting them to step up their treat game even more this year, based on what we saw at the Halloween party. Fingers crossed. Stretchy pants at the ready.

The characters – During the parties, there are a number of “special” characters that come out. For past parties, we have seen Jack Skellington (Sandy Claws), Uncle Scrooge, and Nick Wilde and Judy Hopps. I think we may try to do Snow White and the Seven Dwarfs this year. Maybe. The line for it is hella-long but we may use our pre-party time in the park to get lined up and see them early, before we get started on the rest of the party.

The attractions – In the past for us, the attractions have actually taken a back seat. We have spent more time with characters, seeing shows, fireworks, etc. But this year, the kids really wanna take advantage of the shorter lines and get on some more Magic Kingdom attractions. I am kind of on board with this in 2018. I mean, I loved seeing Mickey’s Most Merriest Celebration last year and Holiday Wishes is nice as well but parking for so long in the Hub had us feeling like we were missing so much from last year. I am more looking forward to hitting some treat stops, riding some attractions, and walking around taking in all the Christmas this year. Did I mention hitting the treat stops? Right. Ok.

But Day 11 has a ton more awesomeness in store. Especially being that it’s Nickie’s birthday. Stay tuned.