Hi everyone! We are back from our epic 17-day California road trip. And you know what that means…

Well, I mean. Kinda? But not exactly.

What? I literally said we JUST GOT BACK from vacation.

That doesn’t make any sense.

Now you are just being ridiculous.

Fine, yes. It’s showtime. Let’s just get on with it.

Over the course of the next series of posts, I will cover every day of this trip to give you some insight into what we did and hopefully help anyone who may be thinking about a similar trip. Before I get into the actual days though, maybe we should start with the basics.

The 2019 California Road Trip: Stats and What Not

Who: in total, there were 15 of us on this trip. We had the four of us, obviously. The Nerneys (Matt, Laura, Will, and Jack) were there for all overnight stops. The Falzones (Tony, Larissa, and Mia) met us in Monterey and were there through Universal. The Chagnons (George, Stephanie, Courtney, and Emily) ended up meeting us in Universal and flying home with us from San Diego, which ended up being a little different from what was originally planned due to some travel issues. But, we will get to that later.

How: I think the “how” will become evident, but we basically flew into San Francisco and rented a car (well, multiple cars were rented across all the fam squads) to make the drive down to San Diego

Why: We love road trips! Our cross-country road trip we took two years ago turned out to be one of those types of vacations we come back from feeling more than just the post-vacation happies. Spending all that time together, exploring new places, finding our way together made us feel closer as a family than before we left. I mean, all vacations leave us feeling so thankful for each other, but there’s something about a road trip that strengthens that bond more than any other type of trip. At least for us.

OK, let’s get on with the trip.

Yes, Day 1 was a travel day. It was also the kids’ last day of school. And I was technically working. But that doesn’t mean we didn’t have fun. Of course we had fun. We’re the Goodys.

For their last-day-of-school breakfast, we made the boys waffles on our new Mickey waffle maker we got a couple days prior. We had been waiting FOREVER for shopdisney to get these in as we had heard they make the closest approximation to actual Disney waffles. 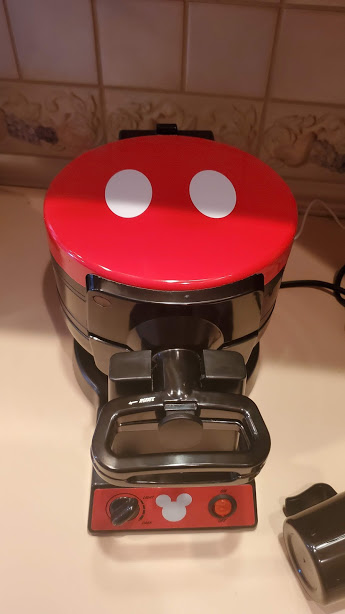 We had also purchased a bag of the same waffle mix Disney uses – Golden Malted – to really nail the whole thing.

And you know what? They came out pretty great. Both the boys agreed they tasted just like Disney waffles. Which I mean. It’s high praise.

After breakfast, the boys got ready and we dropped them off at school for their last day. Nickie and I then headed out for what has become a trip-day tradition – breakfast at Nick’s Deli in Revere, MA.

As we sat down, we were both sort of in a state of excited disbelief that the day had actually come. We were going to California. See. Look at Nickie. Look how excited she was.

For breakfast, Nickie ordered a grilled blueberry muffin with eggs and a side of home fries. Oh, and a Diet Coke. On account of she is off coffee. Like some sort of crazy person.

I got the bacon, egg, and cheese breakfast sandwich on a grilled English muffin, also with a side of home fries. And coffee, of course. Because coffee.

It was a pretty perfect breakfast. We enjoyed the food immensely and we talked about the upcoming trip. Expectations, plans, etc. In that we expected the trip to be awesome and we planned on having an amazing time. We are big planners. And expecters.

We then went home so I could get my work situated and we could get the house all cleaned and ready for my Mom, who would be staying there while we were away. Watching the house and taking care of this little girl. 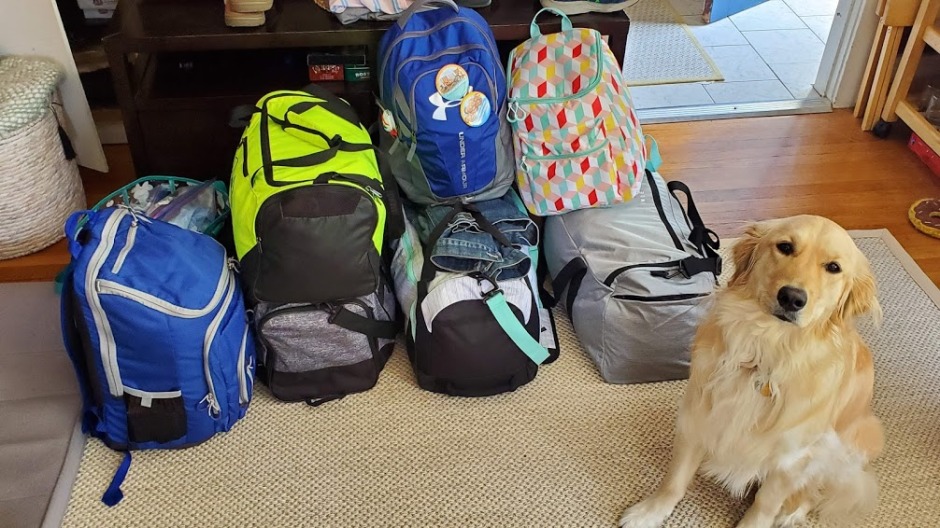 Ugh, Lilo. Look at that face. We were really gonna miss her but it was helpful knowing my mom would be there with her. She kinda loves my mom. Like, a lot.

At around noon (the kids had a half-day), Nickie drove down to get the boys so I could finish up my work. I didn’t even want to bring my laptop on the trip, so I had to make sure all loose ends were tied up.

They all were back within 20 minutes. We ordered up an Uber and were off within 40.

Our flight wasn’t for a few hours but we usually like to get to the airport a little early. To drink.

After making it through the relatively short security line at Logan, we walked over to our gate which happened to be near a spot we were interested in checking out  – the new Bruins Bar in Terminal A.

As big Bruins fans, we were really looking forward to this being the big kick-off to the trip. Well, most of us were. From the looks of this pic, it seems Myles was bored with the whole idea of it.

The place is super small so there was a bit of a wait to get a seat. We had to hover and wait for others to finish so we could grab a table. They probably should start letting people put their names in at least so as to avoid having to have people like us standing there watching you eat. Not a good start.

When we finally did get a place to sit at this counter, Nickie and I each ordered tall Bud Lights to start and the boys ordered a couple sodas. I got up to look around…

And then came back to the table. No beer yet. We waited probably like 10 minutes or so and then finally our waitress came over to tell us the Bud Light keg was kicked. Not a good start. There was one glass left, which Nickie had and I ordered some other thing they had on tap – I think it was a Sam’s Summer.

We also put in our food orders at this point. And then we waited.

And waited some more.

Finally, our food did end up coming. I, however, had still not received my beer. So as she was dishing out the food, I reminded the waitress of that fact and she said it should be coming shortly. Cray.

Provolone? More like “Provo-gone.” On account of it’s hardly there. But I guess maybe that’s the theme? Since they seemed to also be having some sort of steak shortage.

Myles got the giant pretzel and a bowl of clam chowder. 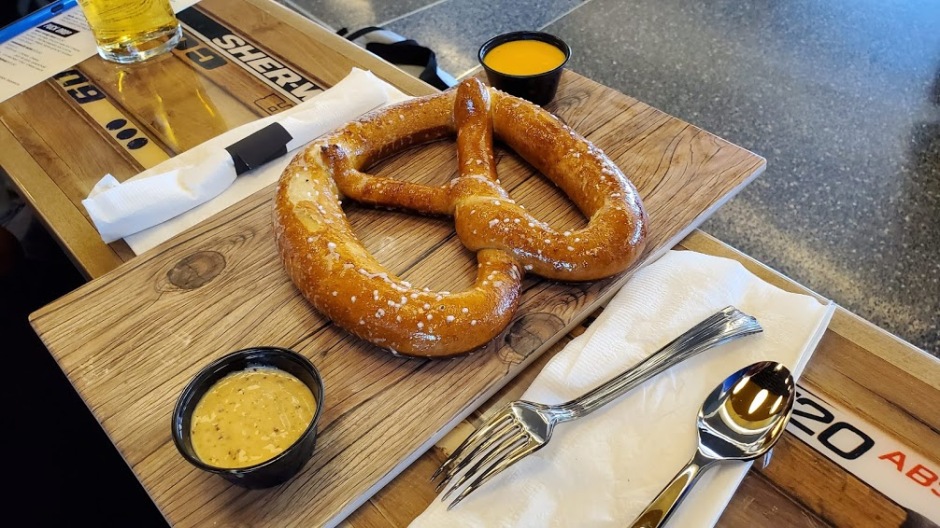 Both of which were pretty good, actually. He won lunch. Well, sort of.

Owen got a cheeseburger, but he hardly ate any of it because he was still suffering from a little PTSD from his choking incident I mentioned before.

So he actually ended up swapping his burger with Myles for his clam chowder. I also did finally get my beer. And immediately upon receiving it, I ordered another drink knowing it would most likely take a lifetime to receive it. I ordered a Bulleit Rye on the rocks. 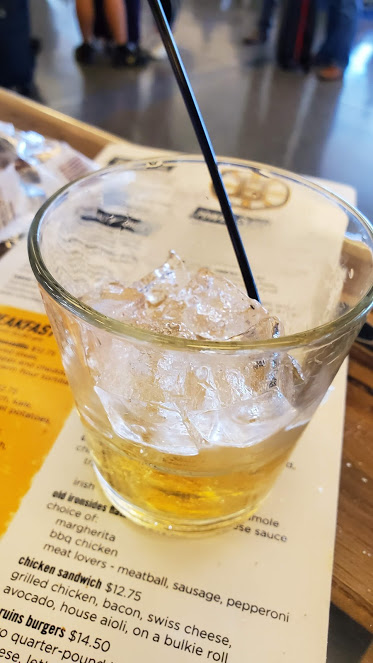 We then walked over to the gate. The kids wanted to have some phone time and Nickie and I were determined to have a more positive pre-flight experience so we walked over to Vino Volo to repair the situation. With wine.

They serve food here, but we were not here for food. Unless you consider wine “food.” Which I do. So I guess we were here for food. We both got flights of wine. I went with the California Kings flight while Nickie chose the Shades of White.

Now THIS is how you pre-fly. With a flight.

Nickie would probably prefer I leave this next part out of the blog. But thankfully, I control the blog, So here goes. As Nickie was telling me a story, she made a sweeping motion with her hand and knocked a half-full glass of wine off the bar, sending it to the floor, where it proceeded to shatter.

Thankfully, she was on her last glass so there wasn’t much wine lost. Also thankfully, it was her glass of wine and not mine. Because I had the reds. And also because it would have been my wine that spilled.

We cleaned up, apologized profusely, and made our way to the gate to meet back up with the kids AND collect our Parents of the Year award.

But we did make up for it. Nickie went and grabbed ice cream at Friendly’s for the boys. And we were back on top. 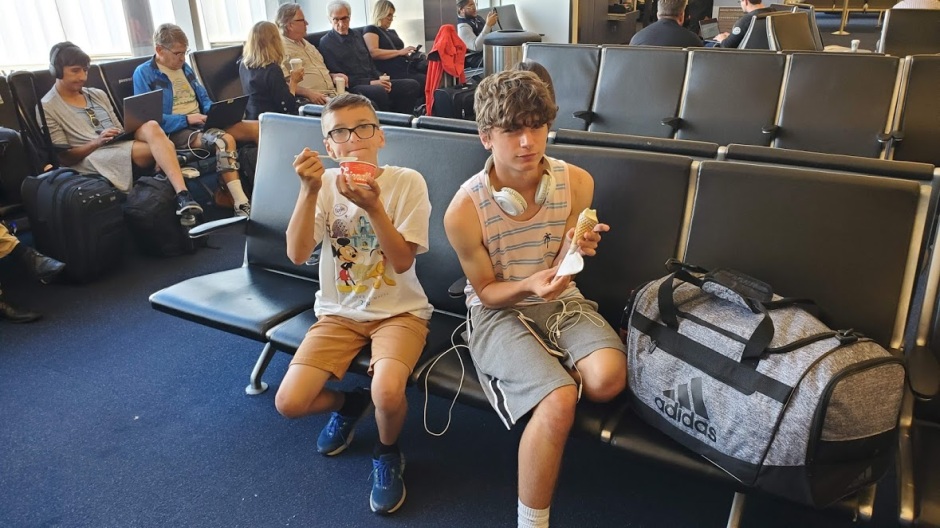 And soon enough by 5:30PM, we were on the plane. Which obvs means selfie time.

The flight from Boston to San Francisco was scheduled to last over 6 ½ hours. Which gave me plenty of time for both books and movies. I started with some reading first. Nickie bought me Dear Evan Hansen for Father’s Day, which I had yet to start.

I spent the first hour or so of the flight reading and hanging out with Myles. The book is great so far, by the way.

During the flight, I also watched Happy Death Day 2U. And I am embarrassed by how much I liked it. Don’t judge me.

Also, being that we flew Delta, we got our choice of three meals. I think there was a veggie wrap, some kind of noodle salad, and a cheese plate. I went with the cheese plate since we had already eaten. I also ordered a Dewar’s since I had only had one whiskey that day. So far. 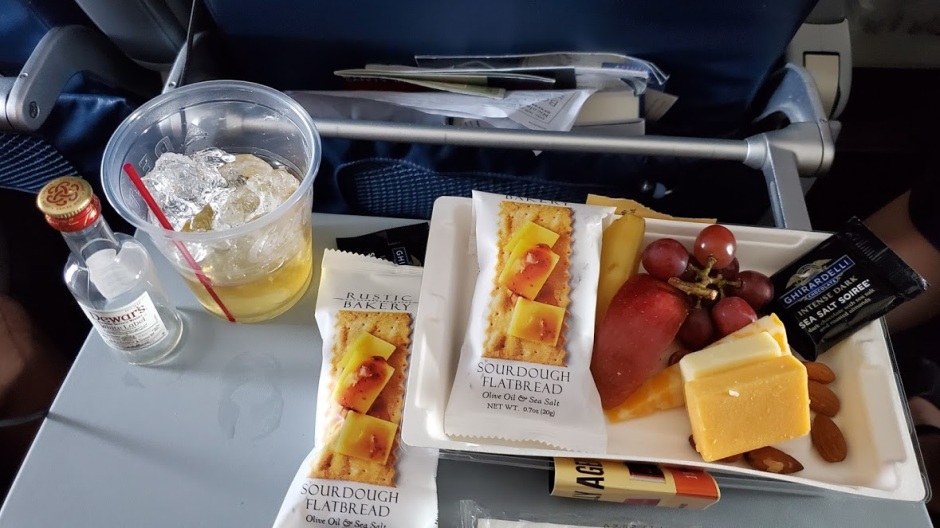 Nickie also got a cheese plate, Myles went for the noodle salad, and Owen opted for some Cheez-Its when the snack basket came by. Everyone seemed happy with their choices. Especially me. Because mine included Scotch. 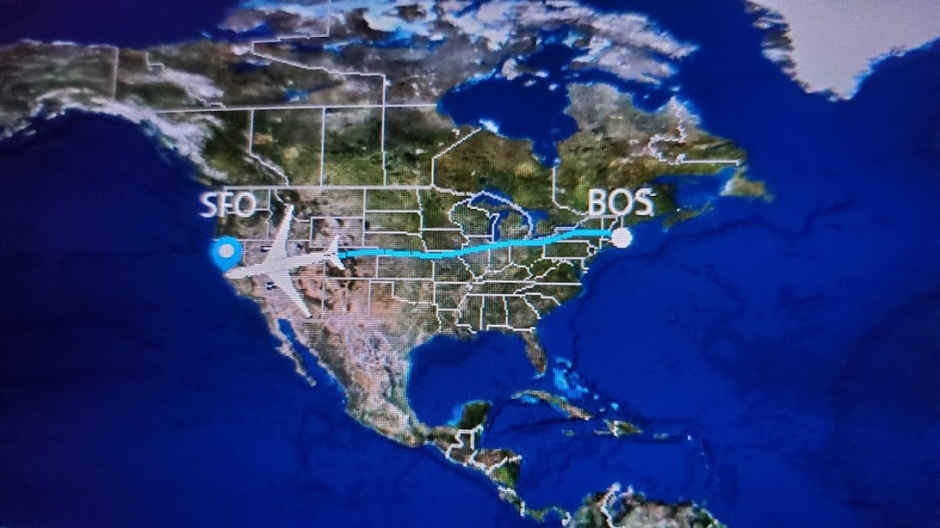 While there was still some shred of light outside on the west coast, it was around midnight our time, which left Owen a bit zombie-fied. 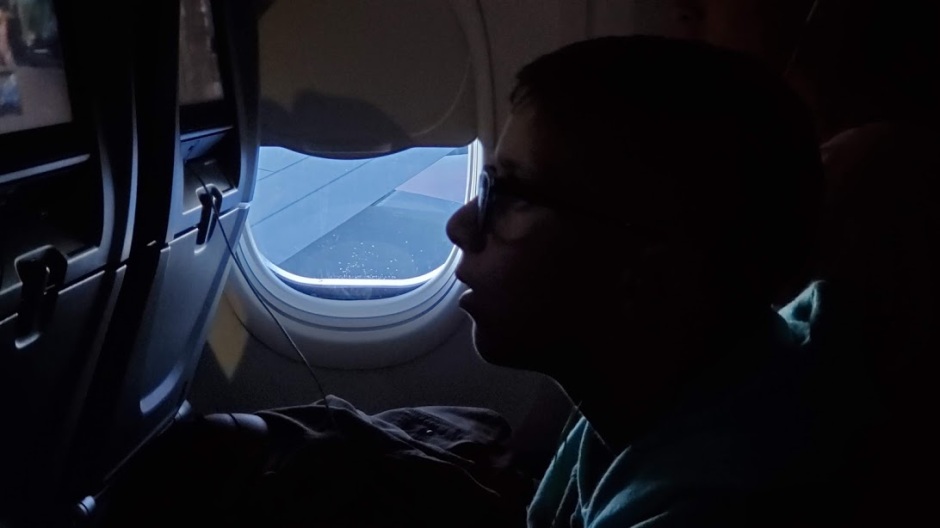 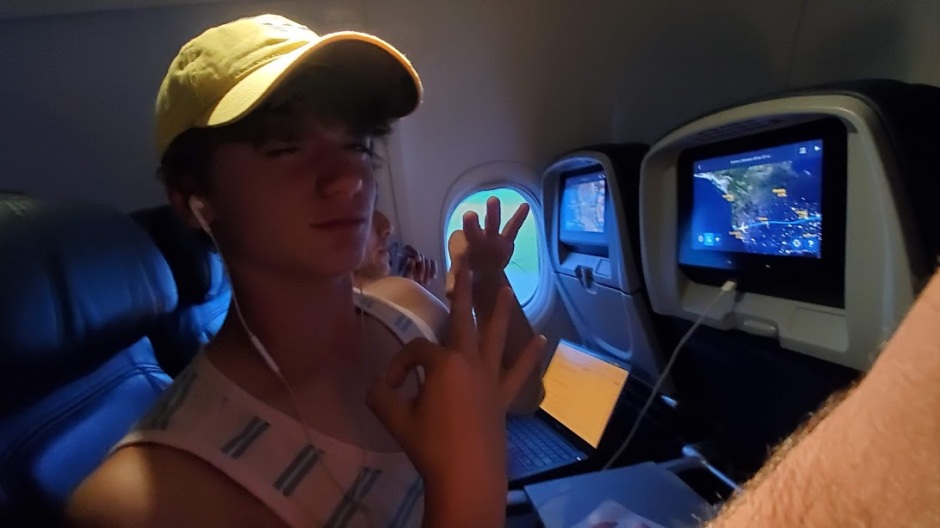 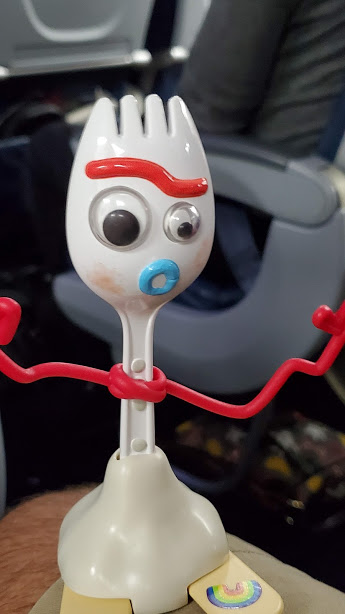 Once off the plane, we made our way to the hotel shuttles and grabbed one for the Hilton Garden Inn San Francisco Airport/Burlingame, our home for the night.

We stumbled into the lobby… 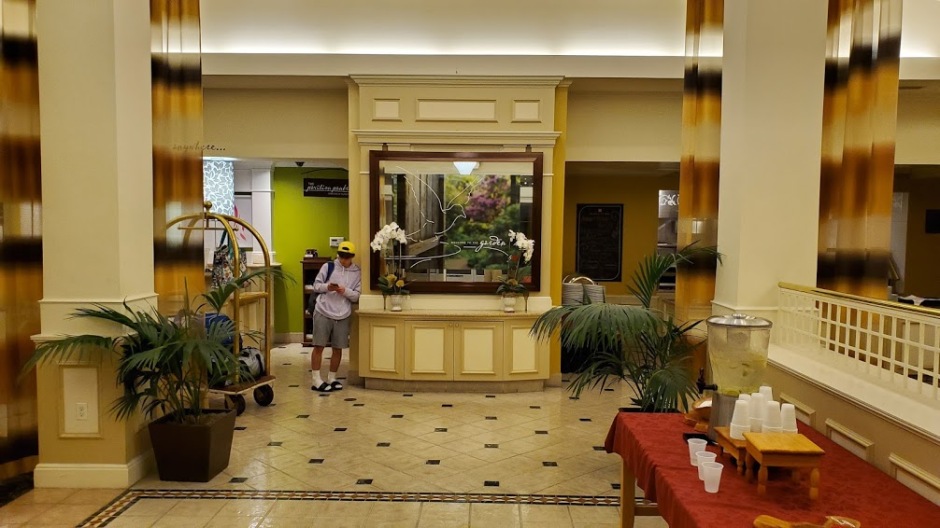 …and somehow found our beds. And once our heads hit the pillows, we were all OUT for the night.

Which is good since we had a pretty packed day planned the next day. But I will save that for the next post. But I will leave you guys there – in the darkness in San Francisco with 16 days of amazing laid out before us.