Good day and welcome to Day 4.

We left at around 7AM and walked from our room over to Jambo House for our 7:30 reservation at Boma – Flavors of Africa.

Suffice to say, this breakfast was great. And service was excellent.

After breakfast we headed to Animal Kingdom.

And the kids had one thing on their minds.

So we met back up with the Falzones and headed to Wind Traders in Pandora.

The kids are led to the banshees and are told how to train them, feed them and bathe them.

They then pick the one that most speaks to them and adopt them. 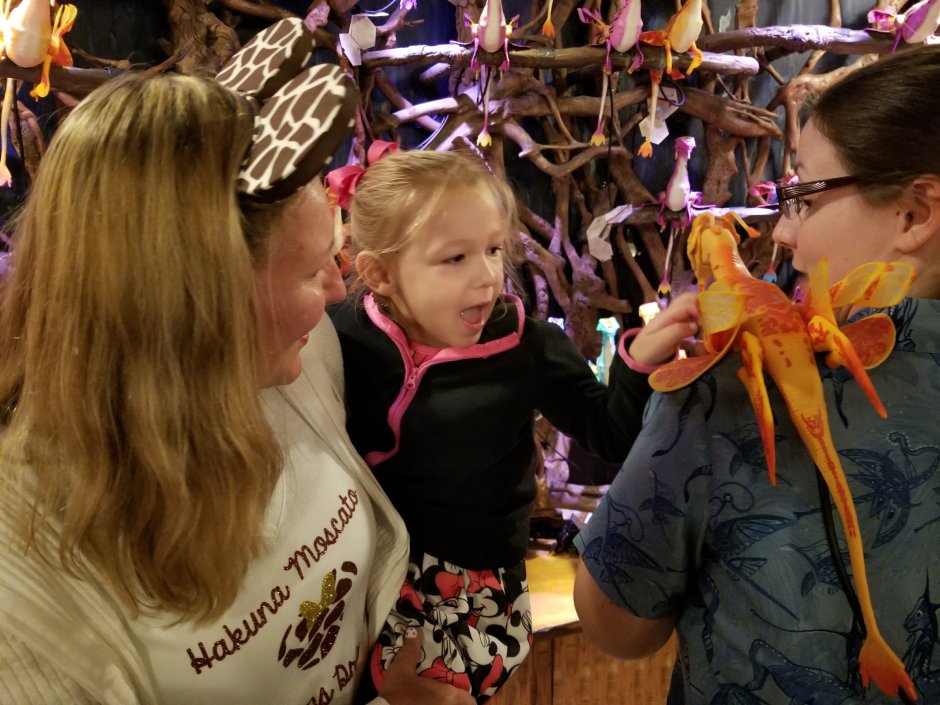 Then they have to take a pledge and we bring them home. Well I mean we have to pay for them. 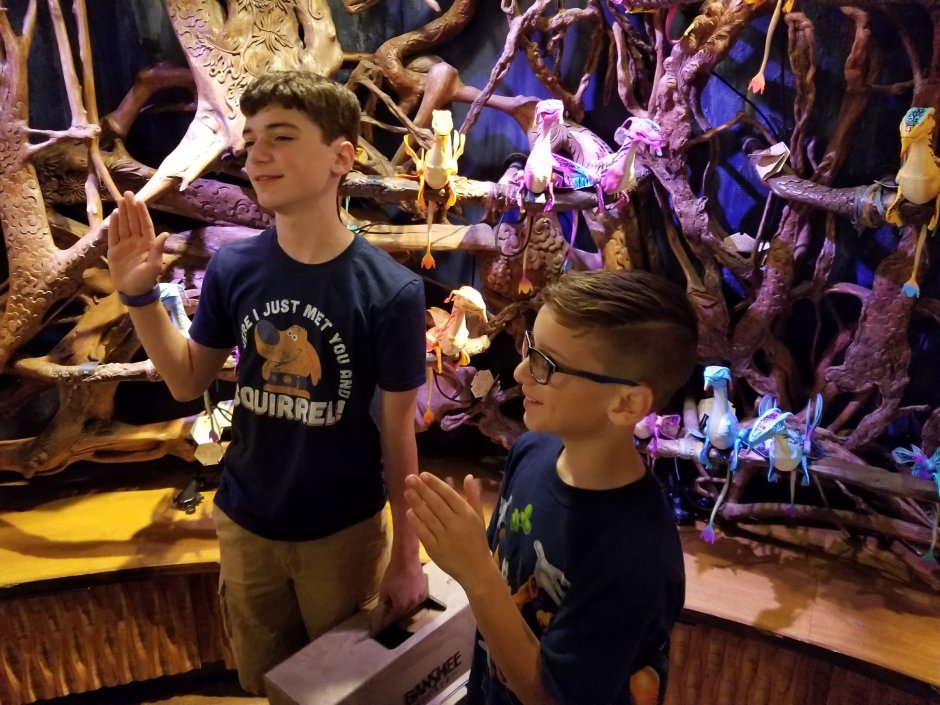 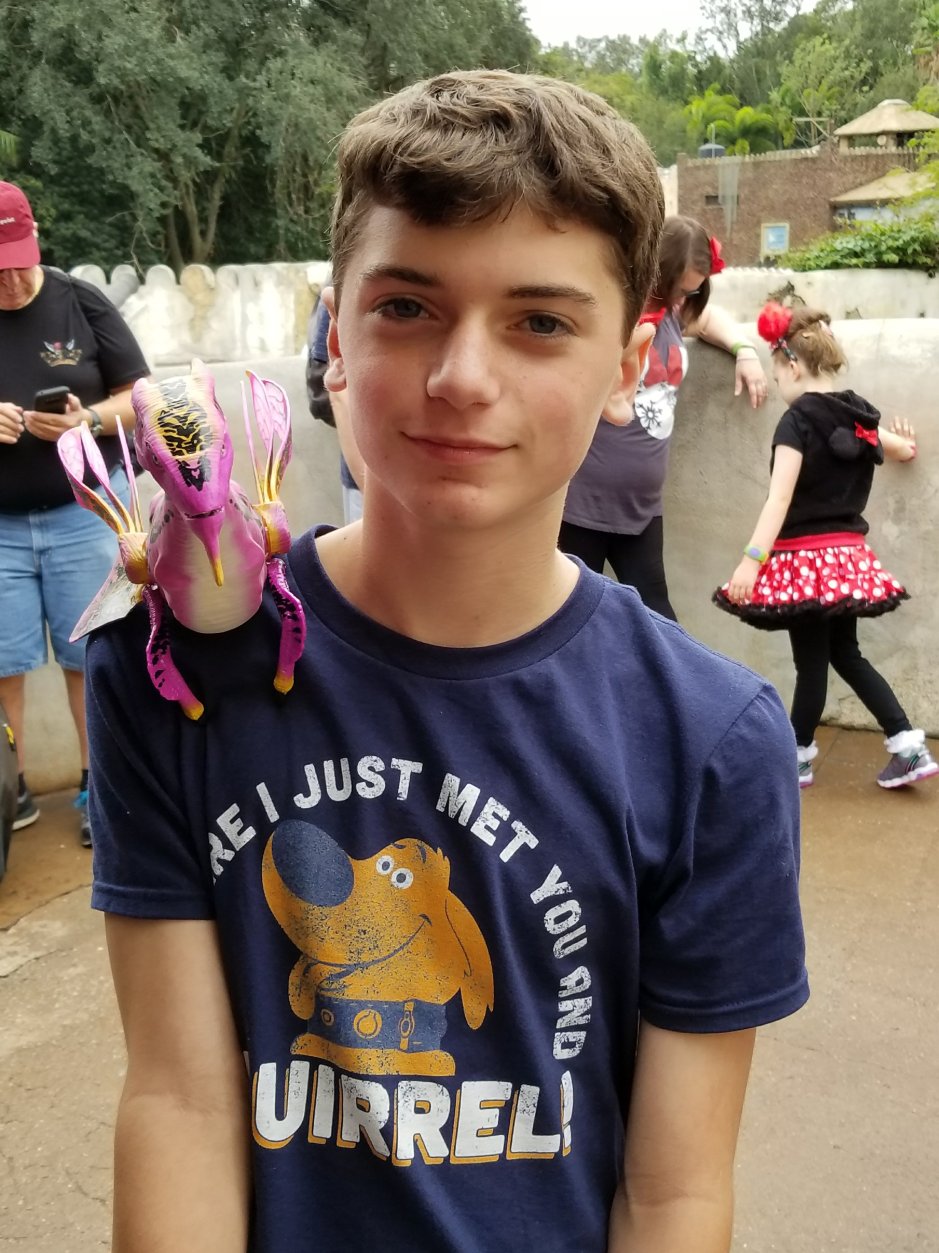 They were a little pricey but I mean a nice change of pace from just another stuffed animal. Though I was pushing hard for owen to get one of those Baby Na’vi. So cute. And blue.

We then grabbed a cup of coffee at Pongu Pongu and chilled for a little bit before heading to Kilimanjaro Safari. We got our nighttime ride in already but wanted a day ride as well.

And as neat as it was to take a Safari at night, the daytime ride still wins. It’s longer and we still see more animals. Giraffes and elephants don’t think the night time is the right time. Oh some pics…

Yeah the Safari was cool. But in other huge news, we got our first Disney Wall pictures in Harambe. #DisneyWalls

So while we had lunch in only a little bit it was now that Tony realized snack credits could be used for more than bottled water.

So we got teriyaki beef sliders at Caravan Road.

And sriracha fries at Mr. Kamals.

We also got falafel but it was eaten before evidence could be collected. Of the three I think liked the sliders best but the fries were also pretty great.

Then we ran into these two.

Then it was time to split up for a bit. Myles, Nickie, Larissa and Mia went to catch Finding Nemo: the Musical. Tony, Owen and I went in search of the Yeti on Expedition: Everest. Tony was a little worried with all the sriracha frie-ness but FOR SCIENCE! 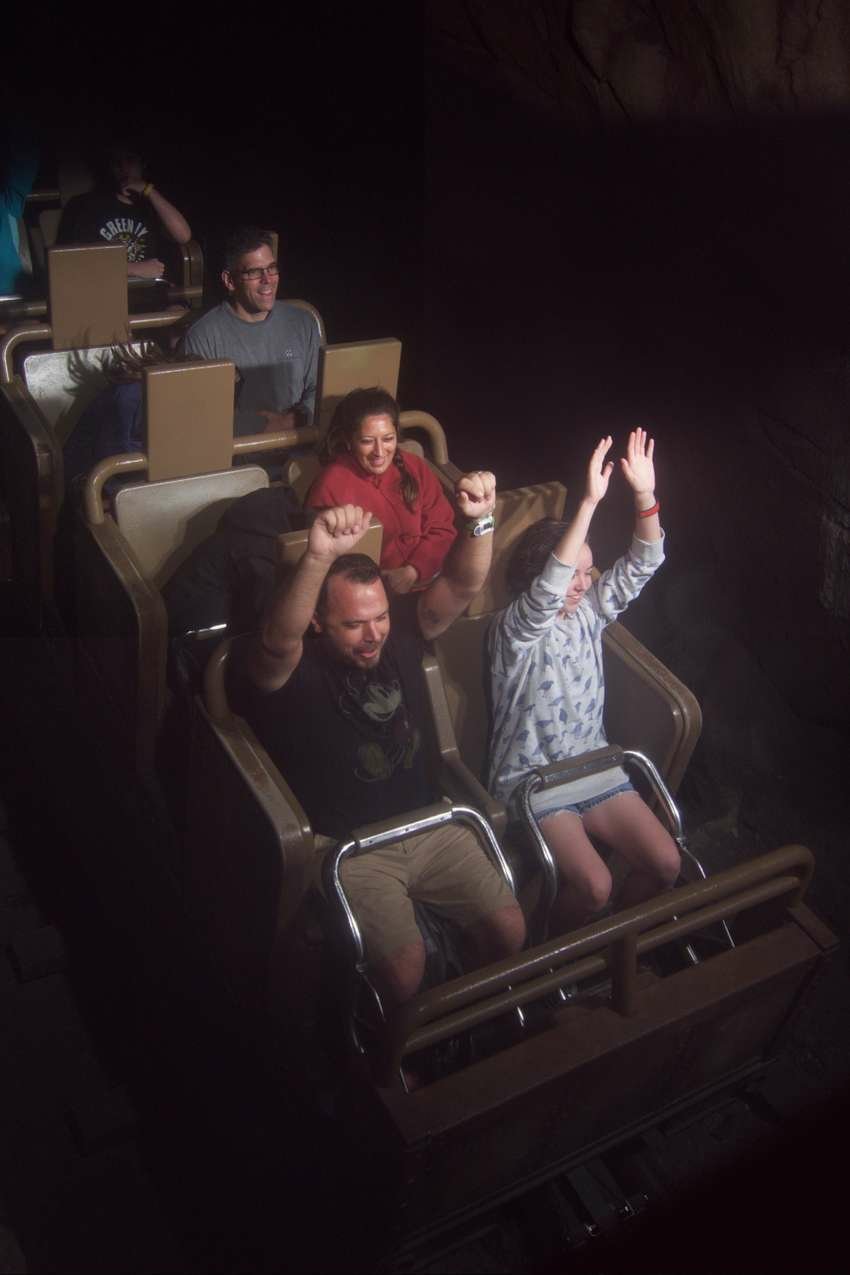 The three of us still had time before the others got out of the show so we headed to Dino Land and jumped in line for Primevil Whirl.

Then it was lunchtime. At Tusker House. Yay time for characters. We met back up with the whole group, got checked in and grabbed some drinks while we waited.

We then were brought inside, given a lay of the land and let loose on the buffet.

High points were the fried hummus, curry chicken and yeah, the corn dog nuggets. Corn dog nuggets are the international language. Well the Safari Amber beer was super duper too.

Then, characters. Mickey, Donald, Goofy, and Daisy. They all loved meeting the banshees and Daisy loved hearing our dog is her namesake. 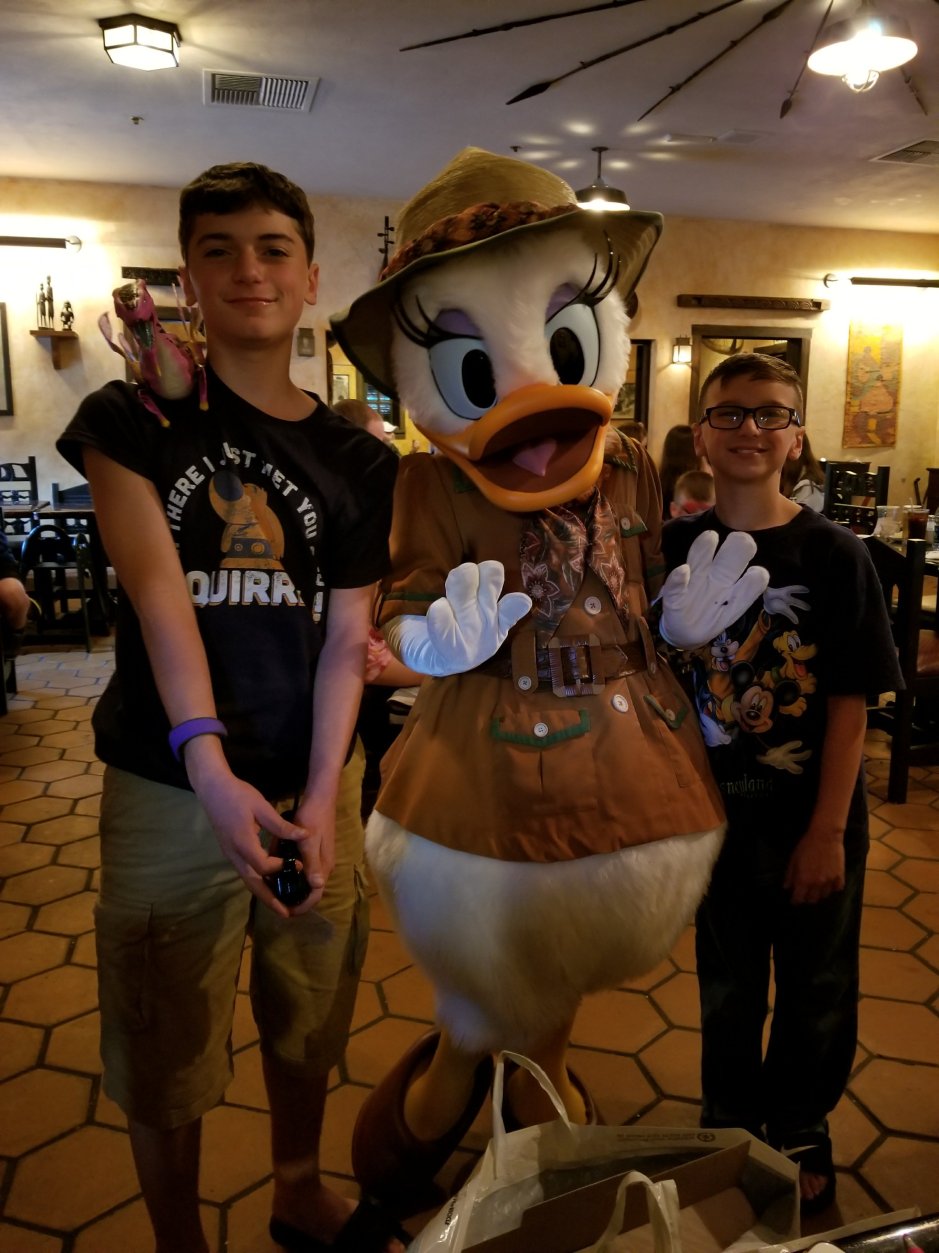 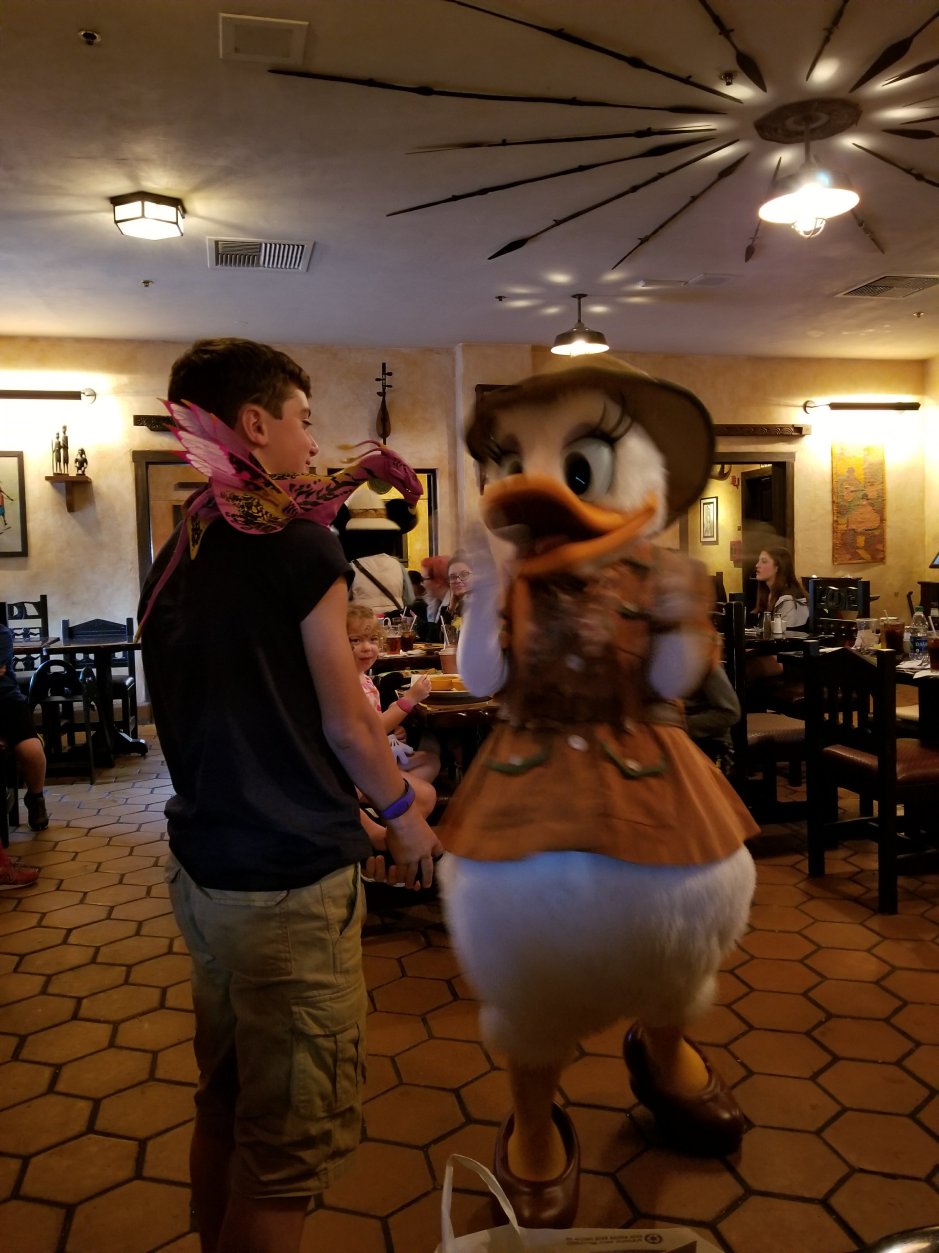 The kids were minor celebrities in here because of their banshees. People were asking them all about them and this one kid was following them all over the place. They loved it. I guess a needy ego is hereditary.

After lunch, all of us except Nickie went to ride Dinosaur. Yep, including Mia. And she seemed to love it. On the bus ride home, she said it was her favorite ride. Though we had to promise her the dinosaurs would not be invited to our party. Love that kid.

And then it was time to leave. Well almost time. I suppose we could stop for this…

THEN it was time to leave. We hopped on the bus back to Kidani Village with plans of pools and arcades. Instead this happened.

But all the animals came to see us.

Nickie took this time to get stuff packed up for our move tomorrow while I wrote some blog.

And before we knew it, dinner was upon us. We left our room at kidani and walked the path over to Jambo house for our dinner reservation at Jiko – The Cooking Place.

So Jiko is a place we have never tried. We have made a few reservations here but have always cancelled for one reason or another. Tonight, we finally made it.

And man, I am glad we did. What a fantastic meal. Our server was excellent and super knowledgeable and every thing I ate, I loved. Like. A lot.

When we first got there, it was just us Goodys so we started in the lounge for some drinks. Nickie got a Cosmo and I got an African Old Fashioned. The boys got cokes.

Then the Falzones came and Tony got a martini, Larissa a white wine. Mia was content watching Peppa Pig. I and a sip of Tony’s vodka martini and it was pretty perfect. Good start so far.

We got the text and were seated at our table for the night. Again, our server was awesometown.

We started with a bottle of Cabernet and some appetizers to share – the chicken flatbread, wild boar tenderloin, fried green tomatoes and (of course) charcuterie. 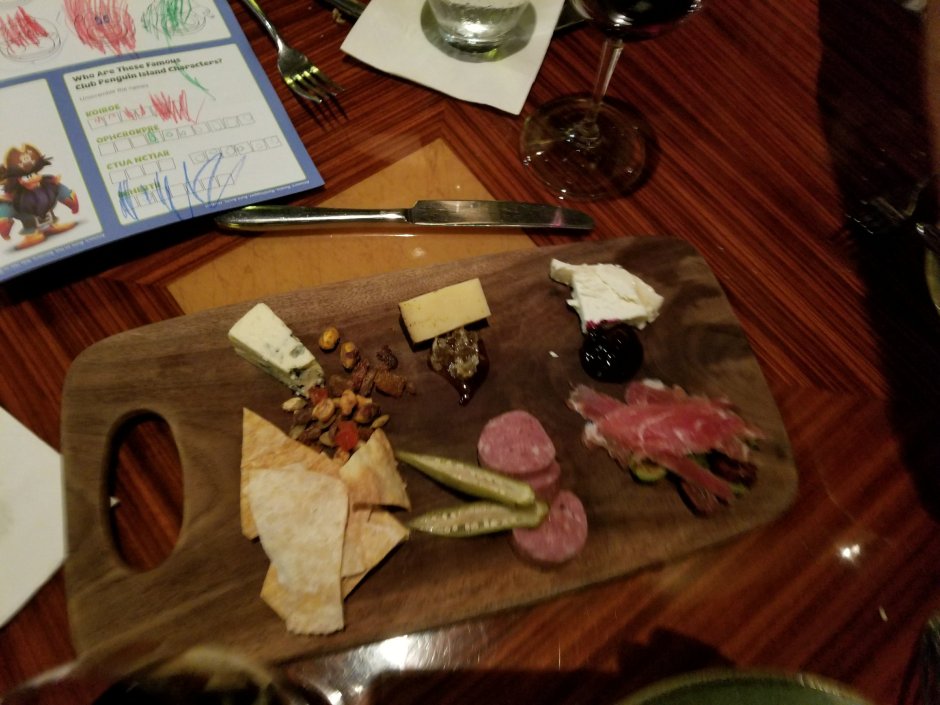 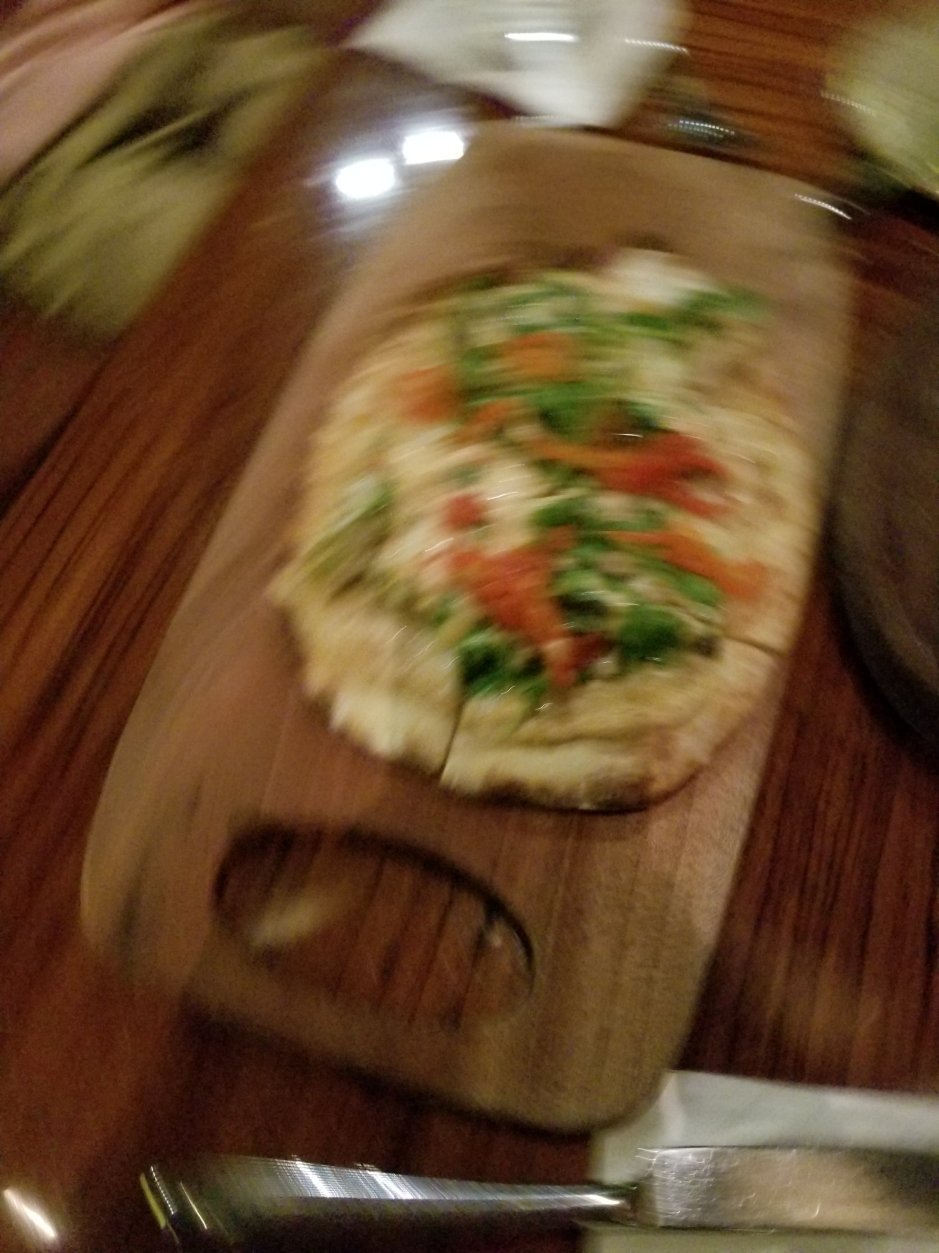 Everything was really good but my favorite was definitely the wild boar. If I were a food critic for a newspaper in the 20s I would say something like, “eating this tenderloin was anythjng but boar-ing.” Right. Weren’t food critics in the 20s super punny? Whatevz.

For main courses, Myles got the cheese pizza, Owen got the steak and Mia got a grilled cheese. Not on the menu hit again, the server.

Nickie had the short ribs and I got the filet so we did some sharesies. Tony and Larissa also got the filet. So they didn’t need to share. 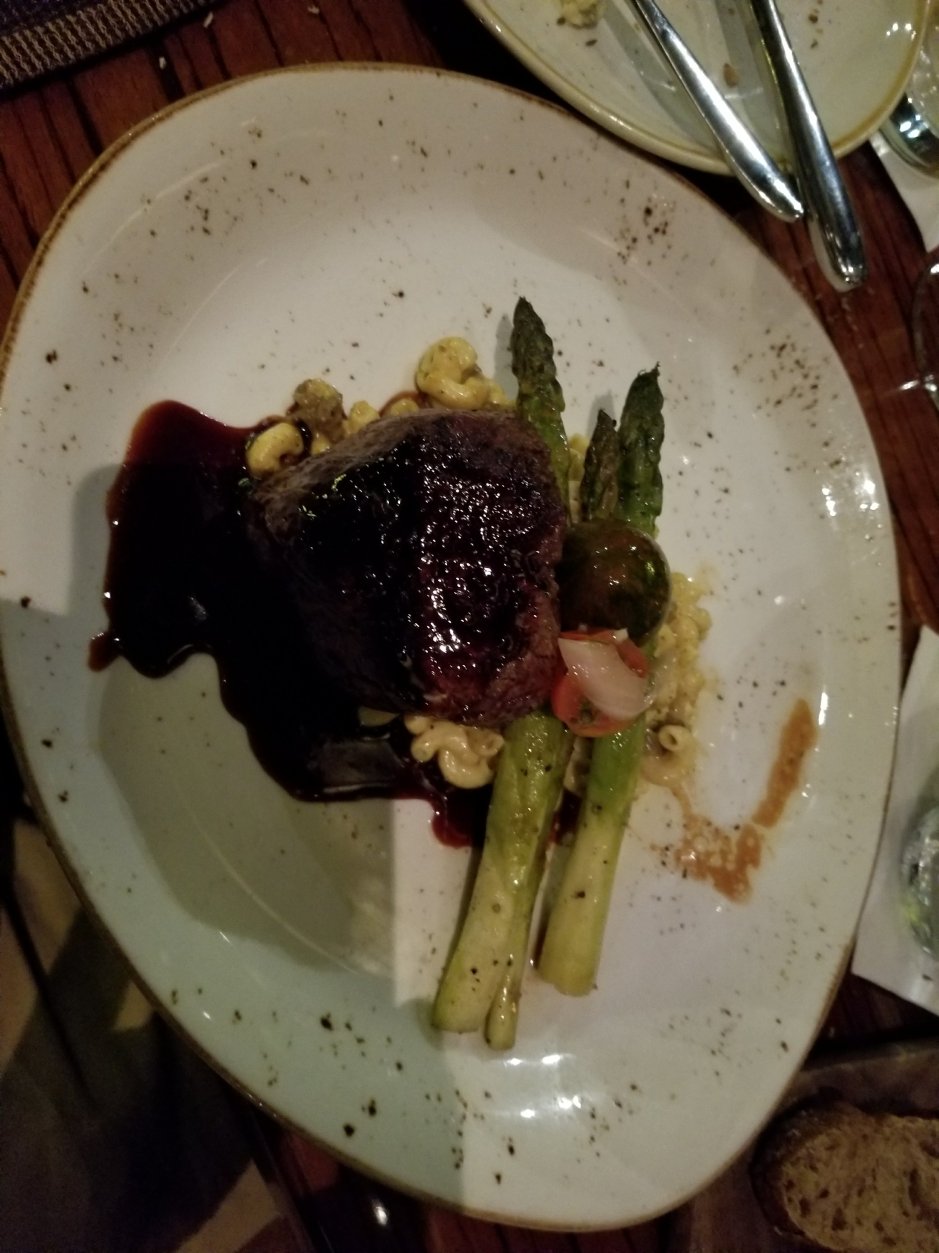 Of those two I have no idea which I liked better. The short ribs were insanely tender but the filet was as well and super flavorful. The bobotie Mac and cheese didn’t hurt none either.

For dessert, I got the Malva Pudding. I got no pics nor do I recall what anyone else got but mine was delicious.

We also got a pressed pot which was obvs squad good. And Tony and I each got another Lagavulin 16 to top off the meal

Honestly just writing about it makes me like….ugh I want to go to there. I am so glad we finally got to try Jiko.

This meal was also like two and a half hours. And I don’t say that as a negative. When a meal is this good, I love when it lasts.

We headed back to Kidani but before I went to sleep, we had some business to attend to. Since we are switching hotels tomorrow our dining plan is going to start from scratch. You know what that means. UNUSED SNACK CREDITS!!!

I had 13 to be exact. so went down to the gift shop and grabbed some lollipops, candy, and of course rice krispie treats. Heh I love unused snack credits.

So that’s that. What an insanely great day. And stay tuned for tomorrow because we not only have EPCOT but we also have more guests. Of the Goody variety.