So remember here when I said we weren’t gonna do the Disney Dining Plan? And then I said it here again? Remember all that?

So as I was saying, we are TOTALLY doing the Disney Dining Plan this trip. As we always talked about. You don’t remember? Well, it’s true. It’s what we always said we were doing. You just must not have been paying attention.

Fine, I will refresh your memory. We are doing the Regular Dining Plan this trip because as we got into the costs of all the ADRs we made and counter service meals we had planned, it made financial sense. We are still taking things down a peg from other trips as we usually do Deluxe. On this plan, we get 1 Table Service, 1 Counter Service, and 2 Snacks per day. 1 Alcoholic Drink is also included per meal. And yes, I did capitalize “Alcoholic Drink” on purpose.  It also includes our Refillable Mugs. Which we were going to get anyways.  To carry wine coffee around.

Day 6 is an interesting day. We had originally planned on not doing a park on Day 6. One of the main reasons for that was we are actually switching resorts on Day 6. We are moving from the Wyndham over to the Bay Lake Tower and while a move wouldn’t necessarily negate park time, we are also only here for one night so we thought maybe it would be better to enjoy the resort a little bit (as well as the other Monorail resorts) before our move to Crescent Lake.

But, with all the switching around and what not, we ended up with an extra park day on our ticket. It was fate. And eh, the plan isn’t too ambitious. Given this is the day before Thanksgiving, I want to make sure I don’t murder yell at avoid confrontation and mumble anything nasty under my breath about any guests given the crowd. Also, who am I kidding? We are going ON Thanksgiving. Crowds, schmowds.  Right?

So being that the Wyndham isn’t technically on Disney property, the whole resort switcheroo is a little more complicated (since we are only one night at the BLT, I will go into the process for switching between Disney hotels in the next post.)  For this switch, we have to take our bags to the hotel.

So, we will have to grab a relatively early Uber from the Wyndham over to the Bay Lake Tower. Probably like 6:30ish. And once there, we will check in, drop our bags off, and head to the Magic Kingdom. Yup, THE Magic Kingdom. And you didn’t wanna go to a park today.

We plan on being there at rope drop and heading most likely right for the Main St. Bakery (AKA Starbucks) for a quick breakfast. Also, I will probably take this same exact picture. Because I’m basic.

We made three FastPasses for the day and really do not expect to do much else beyond them as the park should be super crowded. But I mean crowds, schm….

Our first FP is for Pirates of the Caribbean. Ever hear of it? It was a ride and then they made it into a movie starring the guy from 21 Jump Street. Bah, I know you know it. It’s one of our favorite rides and it’s definitely a good one to kick off the day. I can smell the water already.

Immediately following Pirates, the boys and I have a FastPass for Big Thunder Mountain, which is another favorite. Well, for the three of us.

Nickie is not into the whole “wildest ride in the wilderness” thing so she has a Fastpass for Mickey’s Philharmagic at the same time.

Speaking of calories not counting, after our morning at the Magic Kingdom we will then head over to Wilderness Lodge to hit a new spot (well, new since our last trip) –Geyser Point. I feel like if I had just looked over the menu, the Crispy Chicken Sandwich probably would have caught my eye. But, according to one of our favorite YouTubers Michael Kay, the bison burger might be the way to go. I like listening to other people because it makes it so I don’t actually have to make a decision.

I think they also have a pretty good beer selection. Which is a double-edged sword. I like having good options. But again, this requires a decision. I am already freaking out.

After lunch, we will maybe do a little Magic Kingdom area resort-hopping to check out all the Christmas going on up in here. The Wilderness Lodge is actually a pretty good place to start, with its ginormous tree in the lobby.  Then , we will jump on the ferry and head back over to the Contemporary to start our tour of the monorail resorts.

Since we are staying at Bay Lake Tower, I think we will maybe save the Contemporary for last. So we will most likely jump right on the monorail and save checking out that resort’s holiday decorations for the end. On the monorail from the Contemporary, I think we hit the Grand Floridian first. With all the time I have been to Disney, you would think I’d have the route memorized. But with all the alcohol I have had in my life, you wouldn’t think I’d have the route memorized.

The Grand Floridian is kind of the mack daddy of resort holiday decorations. Giant tree…

Plus they always have music playing in the lobby. And Lagavulin. 16.

The next stop will be the Polynesian Village Resort. Which is one of our favorite resorts in all of Disney. However, it does somewhat lack when it comes to holiday decorations. At least it usually does. Maybe they will step it up this year, who knows?

Eh I mean, they do have a tree. And as you can see from my 2017 picture below, it explicitly states “Holiday Fun” right next to it. So I mean. Right?

And then it’s back to the Contemporary, which usually has a Mary Blair-style gingerbread creation in the lobby. Last year, it was Cinderella: 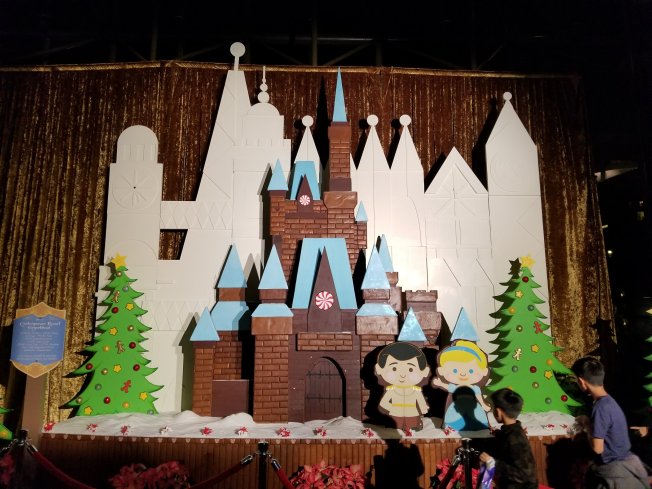 And most likely, the kids will get a cupcake at the Contempo Café while Nickie and I have a couple drinks. And cupcakes.

From the Contemporary, it’s a short walk over the bridge to Bay Lake Tower to change and spend some time at the pool before dinner.

Our dinner that night is at Chef Mickey’s back at the Contemporary. Chef Mickey’s gets kind of a bad rap. I mean, yeah, it’s a buffet. I get it. And the food is relatively standard. But I never seem to have a problem with it.

And I mean you have dinner with Mickey, Minnie, Donald, Goofy, and Pluto. Which is super fun. Just check out this picture from a couple years ago:

I mean, that random lady on the end seems to be having fun.

After dinner, it’s kind of up in the air. We may head back to the Polynesian to watch Happily Ever After and water pageant from the beach. We might head up to the Contemporary observation deck to watch Happily Ever After. Or we might even just head back to the Magic Kingdom to watch it since we already have the ticket. We could also jump back in the pool for a night swim. Or maybe we will just head to bed.

This is the beauty of the pre-trip. Nothing is etched in stone here. I mean, it would be kind of weird if it was. Like, who would etch such a thing in stone?